A fascinating transformation takes place as winter approaches by RAOUF J. HALABY Special to the Democrat-Gazette | November 20, 2022 at 2:02 a.m. 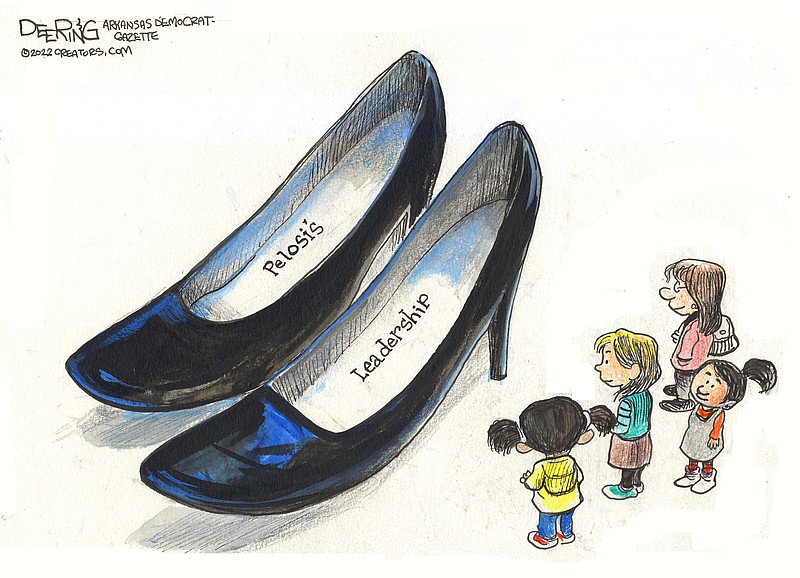 In 1993, 14 trees graced our yard. The largest and tallest, Master Loblolly, stood defiantly in peacock fashion, displaying his majestic canopy to preside over his underling kindred. Two inches shy of a six-foot diameter and barely seven feet from the living room windows, Master Loblolly had every right to crow in prideful swagger.

Though dwarfed by their flamboyant front yard patriarch, 11 mature trees were haphazardly rooted in an L shape along the left and back perimeter of the property's 69-by-140-foot backyard. This clustering provided ample open lawn space for our two boys and their friends to slither across their 25-foot Slip 'N Slide water toy, play ball, and to retreat into the two-tiered treehouse along the back fence.

While 95 percent of the backyard was reserved for the children's mostly warm-weather hours of frolicking fun, the remaining five percent (barely an 8-by-10-foot area) was allocated for garden space in which I planted vegetables as a lingering hobby I began in graduate school as a stress-relieving routine that distanced me physically and emotionally from reading, writing term papers, grading undergraduate papers, studying for comps, and writing a dissertation.

Childhood experiences of gardening under my mother's supervision way back in the Jerusalem, Palestine, days of my childhood prompted me to carry on with a family tradition. In those early 1950s when food was scarce, especially for Palestinians whose ration cards were more meager than the cards allotted to new Jewish immigrants, planting a garden became a necessity. Not only did we depend on the vegetables, but we also depended on the fruit-bearing trees planted by previous generations. Today's gardening is a hobby instead of a necessity.

Since the house sat atop the crown of a frontal incline, Master Loblolly's height, akin to an admiral's topmast on

the lead armada's ship, dwarfed everything within sight. While stormy weather fumed havoc with all the other trees, for some reason Master Loblolly reacted to the sometimes violent southwestern storms as though they were teasing puffs breezing through its forest of branches.

In their younger days the boys enjoyed helping in the annual ritual of raking pine needles and leaves. To turn this chore into play, the pine straw and leaves were piled into large mounds to give the children the opportunity to roll and somersault over their spongy mounds.

The mountainous piles were usually left there for two or three days, and after the new wore off, they had to be bagged and hauled away. While the mandatory task of raking (sweeping the yard, as they say in these parts) and disposing of this admixture of organic materials dampened the play activity and transformed frolic into a dreaded and cumbersome chore, the incentives and rewards were a tray full of their mother's fresh-baked cookies and milk and some spending money to purchase comics or a coveted toy.

Eventually the leaves are bagged and deposited on the curb for trash collection or burned, assuming no burn bans are in effect. I have always opted to use pine straw in azalea beds or for ground cover, and deposit the leaves in a compost pile where the decomposition process of the winter months helps recycle the debris into rich nutrients for the following year's spring seedlings. I call the residual humus my black gold.

During the fall, everything in nature signifies the time when man and beast instinctively begin to prepare for the brooding harshness of winter. Shouldn't the cicada, then, like most species in the insect world, be looking for a safe sanctuary in one of nature's magical and mystical crevices?

Even though over the years I had observed the synchronized cycle of regeneration of scores of 11/2-inch cicada skeletal carcasses clinging tightly onto pine tree bark, bricks, cedar siding, window screens or any available textured surface, I had never witnessed the emergence of a cicada from its shell. Sometime during late September 1993, I had the opportunity to behold this transformative shedding off the old for a newly acquired form, more vibrant than its previous self.

Thus, while sweeping the backyard on a Saturday afternoon, I noted an abundance of deserted cicada skeletons whose distinctive features are hollow shells, four jagged saw-like legs firmly attached to the tree bark, and a skeleton with a dorsal straight-line incision. This conspicuous aperture accentuated the interior void once tenanted by internal organs.

Enticed by a slight motion on one of the many seemingly deserted shells (and perhaps because it seemed odd that a shifting bean-sized pale nodule contrasted sharply with the dark bark), I soon noted a tiny set of stained droopy wings gradually stretch out from the torso of a just-emerged cicada.

This event mesmerized me for well over an hour. So great were my awe and curiosity and armed with a 35-mm camera, I gave up watching my favorite college football team compete in a nationally televised game to observe a magical transformation unfold before my eyes.

I soon discerned several skeletons that afternoon, each of which was at a different stage in this process. The cicada's chrysalis began to emerge, dorsal segment first, through a tiny fissure in the anterior dorsal section. Its incremental squirming soon pared through, much as a scalpel does, the coarse shell to expand the fissure into a wide enough aperture through which an unsightly larva emerged.

After resting for a brief spell, the larva utilized its old shell to anchor itself and utilize its older self as a launching pad to build both momentum and inertia to make the final arduous effort to extricate its soft oval-shaped torso out of its hard shell.

Once the cicada protruded sufficiently, the head, characterized by two bulging eyes, emerged. Soon a synchronized set of slow kinetic gyrations set in. The front right leg, heretofore inconspicuous and compacted tightly to the side, emerged, unfolded, and extended into a serrated-like anchor that attached firmly to the exterior of the hard shell. The process was painstakingly repeated for each of the remaining three legs, and the unattractive grayish-white oval-shaped pupa proceeded to the next phase of its existence.

Soon two triangular-shaped masses commenced to symmetrically and systematically unfold into two wet-looking wings that hung limply to the sides. I soon discovered why the cicadas chose the east in the mornings and the west in the afternoons. As the tissue-paper-thin ashen wings began to unfold and stretch out, the creases, much like those on a tightly packed parachute, commenced to disappear; the sun's warm rays no doubt desiccated the moisture from them.

Within 15 minutes the wings became taut and stretched in a symmetrical configuration; the pallid gray soon morphed into coppery brown, perhaps to blend in with the color of the brown pine bark to distract potential predators.

Approximating the image of a space shuttle perched atop its jetliner transport, the locust quickly dislodged off its old shell and relocated in a more protective crevice in the pine tree bark to both rest from the stressful ordeal of rebirth and to seek shelter in its first lesson about survival in a tough world. Within a 45-minute period the cicada was ready to fly, leaving its old shell behind, and setting off, in an audible buzz, on its new life cycle.

I also had the privilege of seeing nature's healing powers at work. On a neighboring tree I observed a cicada whose damp wings drooped; its front right leg was in the firm grip of a sizable carpenter ant. In the struggle, the lower half of the leg was sheared by powerful incisors, and the ant hurriedly scrambled off with its prize.

I decided not to interfere with nature's course, and wondered what I could have done to help the cicada. Soon a translucent liquid formed itself at the severed joint and increased in size to form a stump-like tip which soon turned into a hardened auburn crust. Once this was accomplished, the wings, arrested in their limp position perhaps because of the locust's need to redirect its energies elsewhere, began to stretch into fullness. I was truly moved at nature's ability to help adapt to the daily adversities of life.

On that late September afternoon I resolved to never look up any information on the Hemiptera Tibicen Pruinosa Cicadidaethe--"dog day" cicada--in an entomological encyclopedia. I did not want the dignity of this metamorphosis to be degraded by scientific minutia.

How ironic, I thought. For after teaching English and humanities classes for 23 years, I took a sabbatical to study art history in Rome, Italy. I also decided that at age 47 I wanted to try something new that would recharge and energize me, and would also allow me to remain in the field of education, the avocation to which I had long ago dedicated my life.

It was just about the time I was heading to campus some 12 years back I saw this metamorphosis play out. And even though 29 years ago I observed several cicadas go through this process, I was again drawn to the singularity of this exhilarating and affirming act of nature.

As I hurriedly sped to campus I thought of the many metaphors and symbols that punctuate our lives. In its metamorphosis, the cicada must shed its old crust to emerge into a new form in an anachronistic fashion. Fall is the season of ripeness, maturity, and fruition, while spring is the season of the powerful procreative force that heralds birth, youth, continuity, and dynamism.

And I couldn't resist drawing a parallel between my decision of 29 years ago to retool in the late summer of my life, and the cicada's need to acquire a new form in the late September of its own.

After a long spell of bitterly cold weather and an accompanying destructive ice storm 17 years ago, Master Loblolly and his chorus of disfigured companions had to be cut down and hauled off. Hundreds of linear feet of seasoned lumber metamorphosed into building materials which no doubt made their way to new homes.

While the symbiotic guest/host relationship between our loblollies and the visiting cicadas is history, the cicadas are no doubt finding neighbors' trees to persist in their life cycle.

The new quickly wore off the Datsun roadster, and it was sold to a collector of vintage cars. The custom-made license plate hangs on our garage wall and reads: Prof's Toy. It is a reminder of more agile, and perhaps more foolish, younger days.

Our sons have grown into outstanding young men who, with their families, give us an abundance of pride and joy. The 8-by-10-foot garden has metamorphosed into a most productive 50-by-55-foot garden whose produce is shared with neighbors and friends.

The dynamism of the cicada metamorphosis expresses the mystical magic of drawing one just a bit closer to comprehending what it means to be human, and to grasping on to the import of that fragile thing called life.

What I witnessed is art in its purest and most pristine form; man-made art. Described by Plato, Aristotle, and others as mimetic in nature, it is merely a weak attempt at copying the natural world.

Raouf J. Halaby is a Professor Emeritus of English and Art. He is a writer, photographer, sculptor, avid gardener, and a peace activist. Email him at halabys7181@outlook.com.