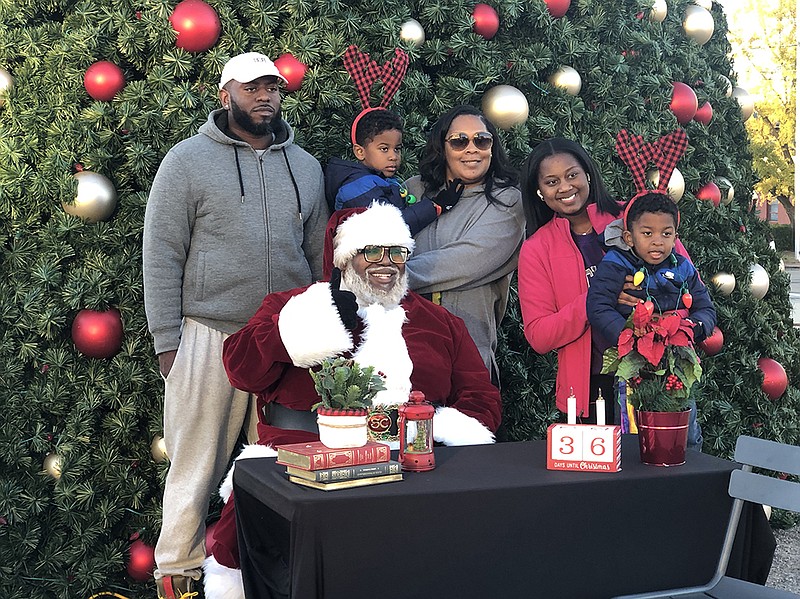 Chris Kennedy, dressed as Santa Claus, poses for a photo with members of the Heaggans family at the annual Northern Lights Festival in the Argenta neighborhood of North Little Rock on Saturday. (Arkansas Democrat-Gazette/Daniel McFadin)

Recently, Chris Kennedy was visiting an Academy Sports and Outdoors store when he grabbed a basketball and started dribbling.

The sight confused at least one person.

“Somebody was like ‘Dude, you’re pretty spry for an old man,’” recalled Kennedy, who sometimes forgets what color he dyed his beard.

Kennedy had to set the record straight.

But it was the first time he’s done so as minor celebrity.

Kennedy, who lives in North Little Rock, met with families two days after the debut of the HBO Max documentary “Santa Camp.” Directed by Nick Sweeney, the documentary chronicles three people aspiring to be unconventional versions of Old Saint Nick. Kennedy’s story is told, along with a Santa with a disability named Fin and a transgender Santa named Levi.

For four hot days in August 2021, cameras followed Kennedy as he attended the Santa Camp put on by the New England Santa Society in Manchester, N.H.

What led Kennedy, a full-time amenities coordinator at telecommunications technology provider First Orion in North Little Rock and a part-time food blogger for Rock City Eats, to spend a week with a group of largely elderly white men learning the ways of Santa Claus?

It was a long way from Longview, Texas, where Kennedy grew up.

There, Kennedy’s love of Christmas was first inspired by his dad, Gus. During the holiday season, Kennedy’s father would be hired to decorate people’s home with Christmas lights.

“On the weekends when I had time with him he would take me to see some of the work that he had done,” Kennedy said. “So that meant I got to see these gigantic houses covered in lights and all this stuff. … I got to spend time with him riding around, eating at McDonald’s and looking at Christmas lights. So that’s where my actual love of Christmas and decorating my yard and everything came from.”

For four years, the Kennedy family had put an inflatable Black Santa on their front lawn in North Little Rock.

Then one day Kennedy found a letter in his mailbox signed by “Santa Claus.”

It read: “Please remove your negro Santa Claus yard decoration. You should not try to deceive children into believing that I am a negro. I am a Caucasian (white man, to you) and have been for the past 600 years. Your being jealous of my race is no excuse for your dishonesty. Besides that, you are making yourself the laughing stock of the neighborhood. Obviously, your values are not that of the Lakewood area and maybe you should move to a neighborhood out east with the rest of your racist kind. Yours truly, Santa Claus.”

The letter resulted in Kennedy’s neighborhood rallying around him, his family and Black Santa.

It also led to the most powerful moment of Kennedy’s story in “Santa Camp.”

One night, with his fellow camp members sitting around a fire, Kennedy read the letter aloud. He wanted anyone skeptical of a Black man wanting to be Santa to know why he was there.

Then he threw the letter in the fire.

“It was very cathartic,” Kennedy said. “It felt good to throw it in the fire because it was 100% putting it behind me. And not that I had let it have power over me before, but it was definitely a way to make sure that it never had power over me, ever.”

It was “surreal” for Kennedy when he watched the final product of the documentary ahead of its release.

“You hear your voice every day you speak, but you don’t hear your actual voice,” Kennedy said. “It was actually very cool to see how they put all the stuff that we had filmed together, and I love how the message of the movie went.”

Though Kennedy went viral in 2020 over the racist letter he received, he and his wife, Iddy, kept knowledge of the event from their daughter Emily, who just turned 6. She learned about it when they watched the documentary for the first time at its theatrical debut.

“She was like, ‘Why were people being mean about Santa?’ … I just told her ‘People are dumb,’” Kennedy said. “Then I told her that sometimes people make mistakes, and I think that person has had to live with that mistake for the last three years.”

Meanwhile, Kennedy’s response to the letter has turned into an opportunity to bring joy to children.

“After a year of doing it, I’ve definitely learned to relax and enjoy it a lot more,” Kennedy said. “One of the biggest things that I learned (at Santa Camp) is it’s all about your heart. I’m doing events that mean something to me. I’m not doing anything that I have no heart for.”

On Saturday, Santa Claus was about 20 minutes late to his Northern Lights gig. His station was set up next to a giant fake tree in Argenta Plaza, located in the shadow of Kennedy’s day job at First Orion. Despite the late arrival, kids waiting in a line of just over 30 people and growing were eager to see him.

The third group to get their picture with him was the family of Eboni and Ray Heaggans of Little Rock.

They brought their 3-year-old twins, Ryan and Ethan, and their 18-year-old daughter, Camille.

Eboni was aware of the “Santa Camp” documentary.

“It made me actually follow (Kennedy’s) business page on Facebook,” Heaggans said. “I even went as far to check out his website so we can book him for Christmas pictures.”

She said her sons were excited to see Kennedy’s Santa after not being “receptive” in the past to opportunities to have a picture taken with other Santas.

“I came out because it’s good (for) minority children [to] see images like them,” Heaggans said. “That was the biggest part that brought me out to the area for the Northern Lights.”

Kennedy will be busy the next few weeks.

He will be in the southwest Little Rock Christmas parade and the Maumelle parade, in addition to an event for Ronald McDonald’s House.

Once it is all over, he will get to back to looking his age.

Kennedy expects it to happen within “20 minutes after my last gig of the season.”

“Last year, I literally finished my last gig, went into Walmart, still had my Santa suit on, bought Just for Men and dyed it black as soon as I got home.”