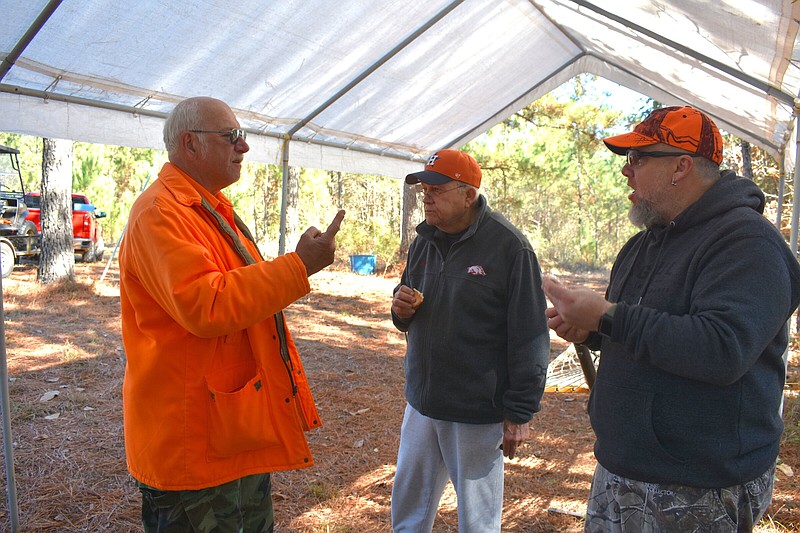 TULL -- Nobody can complain that it's too hot for deer hunting anymore.

In the wake of a cold front Friday that brought freezing rain around midnight, Saturday dawned bright, blue and freezing. It snowed in the Ozarks, and an unfavorable wind at Scotland forced Greg Ellis of Sherwood off his stand early.

Ellis's daughter and her boyfriend had an even shorter hunt before seeking the cabin's hearth.

Ellis, who has hunted with a .270-caliber bolt-action rifle all his life, decided to put that rifle aside in favor of his Henry Big Boy lever-action in .44 Remington Magnum, a pistol cartridge that is well suited for carbine length leverguns.

"Our average shot where we hunt is 50 yards," Ellis said. "That Henry is perfect for that."

During the summer, Ellis said he made some handloads featuring Hornady XTP hollow point bullets.

"At 50 yards through open sights, I can cover five shots with a quarter," Ellis said.

As Ellis walked down the trail to his cabin, he rounded a corner and encountered a young buck working a scrape. Indecision gripped the startled buck.

Ellis, who does not walk with a hot chamber, whipped the gun off his shoulder, chambered a cartridge and aimed at the white patch of fur below the buck's chin. The buck fell within steps from the cabin.

"My daughter was complaining about how even hamburger meat has gotten too expensive, so she was glad to have some deer meat to take back home to Kansas City," Ellis said. "Of course, we're in the CWD (chronic wasting disease) zone, so we had to filet it off the bones. She was happy to get it."

Deer in northern Grant County slept in on Saturday. Members of the Old Belfast Hunting Club said that deer didn't start moving until after 9 a.m. Zach Smith killed a 2 1/2-year old 8-point buck at about 9:30 a.m.

Conspicuously, the buck was not in rut. Its neck was not swollen and its tarsal glands emitted no odor.

At lunchtime, a crew assembled at the Romine camp for Mike Romine's signature beef stew. Naturally, we always eat it from paper bowls with plastic spoons. It was a particularly welcome repast because of the cold. When Romine lifted the lid on his stewpot, a cloud of aromatic steam billowed into the chilly air and provoked the group to leave their seats and stream to its source.

The group included Andy Gates, P.J. Spaul and Henry Jezierski, who held court, as usual, about the virtues of his beloved 300 Winchester Magnum. 180-grain bullets for deer that seldom weight 130 pounds. Like most of the hunters in the Old Belfast Club, most of Jezierski's shots are within 125 yards, but he totes his cannon just in case he needs to shoot over the horizon someday.

It's amazing how many "Henryisms" spice the Old Belfast Club's unique language. We've converted them to acronyms to use with each other in text messages.

Next to the campfire, Ray Reid used a torch to light a cigar that he held well away from his body. The torch sounds like a jet engine, and it makes us all laugh. Reid, who usually does not even take a gun to his stand, enjoys sitting in the woods on a pretty day. A good cigar enhances his enjoyment, and he said it eliminates any temptation of having to waste an afternoon skinning a deer.

Smith was certainly experiencing a bout of buyer's remorse. While he got to work skinning his buck, the rest of us gathered around Reid's iPad, courtesy of his subscription to the Arkansas Democrat-Gazette, to watch the Arkansas-LSU football game being streamed on the worldwide web. Every time Smith looked over at the throng contentedly slurping down beef stew beside the campfire watching the game, he got more or more agitated. Nobody offered to help him.

After we got our fill of stew, Reid treated us to some high-grade shortbread cookies and what appeared to be thinly sliced croissants baked in honey and cinnamon.

"Dang, we're staying at the Ritz!" Romine exclaimed. "We don't know what to with these kind of goodies. We're used to Oreo cookies around here."

The combined effects of the stew and sweets made everyone logy. A couple of folks drifted off for naps in the warmth of their truck cabs while the rest engaged in the lighthearted banter that occurs among friends that don't gather often.

Finally, the clock struck 3:30 p.m.. Like magic, everyone went on point. Deer would be moving soon, and it was time for us all to get on our stands.

Late afternoon was very lovely at my spot in the woods, but an ill wind annoyed me. Though very light, it wafted gently in the direction that deer usually appear. It proved to be a problem at dusk when a doe materialized in the clearing. She caught my scent, and she would not relax. Her body was taut. Her ears stood tall, and she stared toward my stand. She broke her gaze occasionally to nibble something on the ground, but she quickly went back on alert.

A buck joined her momentarily. It was legal buck but not one I wanted to shoot. He was not as patient as the doe. He caught my scent and bounded away, heels high in the air.

When it was completely dark, I descended from my stand as quietly as I could. When my feet touched the ground, I took two steps and vanished. I would come back on a day when the wind was favorable.