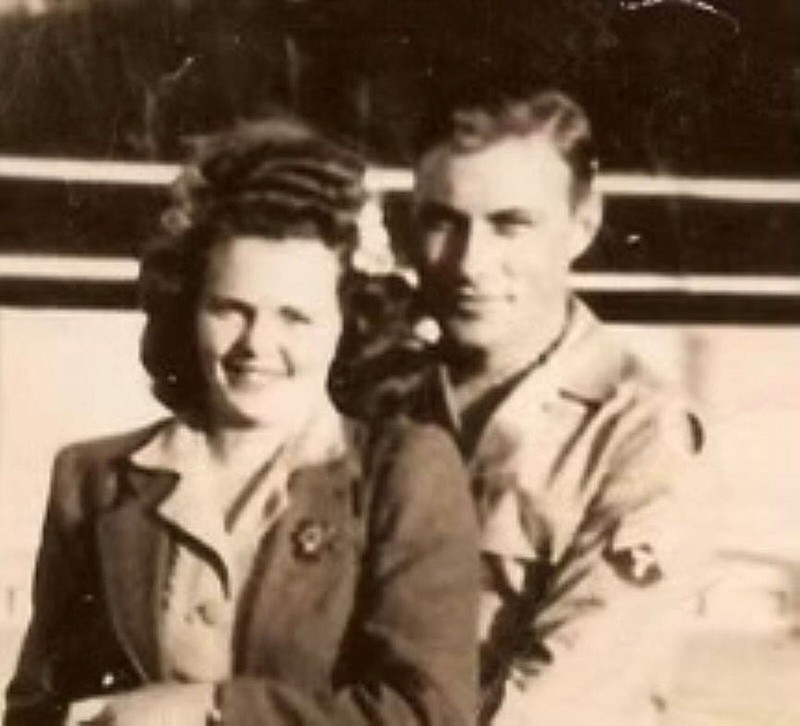 Ima Jean Naugle and Orin Robinson were married on Feb. 24, 1947. Orin says when he asked her father for her hand in marriage, “He said, ‘Yes, but bring her home often.’” Orin did that, returning to visit their families every other weekend after he started college in Springfield, Mo. They often left after those trips with armloads of fresh, homegrown vegetables to see them through until the next time they were there. (Special to the Democrat-Gazette)

Ima Jean Naugle's father was driving the bus that brought her and Orin Robinson together, but he tried to put the brakes on their relationship before it started.

Ima Jean was a freshman in high school in the early 1940s. Her father had been a high school teacher before and then contracted to drive the bus from their rural home in Brixey, Mo., to the school in Gainesville, Mo., each day. (Gainesville is about 25 miles north of Mountain Home.)

"Our farm was two and a half miles from where the bus came," says Orin, then a sophomore. "She lived 15 miles farther north than we lived."

He remembers seeing Ima Jean board the bus behind her older sister.

"We were going home. Several of us were already on the bus, and Trecie got on and Ima Jean was right behind her," Orin says. "That was the first time I saw Ima Jean. I thought, 'She is pretty!'"

Ima Jean and her sister sat just behind the driver's seat on the bus each day and knew their father kept a close eye on them.

Orin's family sometimes moved to Arizona for a few months early in the year, leaving their Ozark County farm when work was lighter to work for a relative who owned ice cream and candy factories around Phoenix.

"I went to a lot of different high schools," he says.

While in Gainesville, Orin rode to and from school on the bus, but he doesn't remember interacting with Ima Jean then.

"Ima Jean was sitting back there and she hadn't said a word," he says. "I gave her the flowers."

That, Ima Jean says, might have been the first time she noticed him.

"This was an evening and several kids had already loaded onto the bus," he says. "I saw Ima Jean coming and I said, 'Ima Jean, let us take you home.'"

"I didn't want to have to ask my dad, because there were kids on the bus already and I didn't want them making fun if he said no," she says.

Orin had a girlfriend back in Phoenix and he was trying to decide whether he would return to Arizona after his discharge or if he would stay home in Missouri. His mother, hoping to keep him close, mentioned that she had seen some pretty girls in town earlier. One of them was Ima Jean, who had complained to her mother that her father's strictness had gotten in the way of her getting a ride home with Orin.

Shortly after that, a postcard arrived for Orin, printed with a message that said "Imogene" wished to correspond with him, if he was willing. He was.

They wrote back and forth, each traipsing a mile from home to the post office to mail and pick up letters.

It was a year after they married that Orin showed Ima Jean that postcard and they cracked the mystery of who sent it.

She recognized her father's handwriting as well as the misspelling of her name, the way her father had wanted to spell it.

"My mother must have given him a good talking to, and that wasn't like her," Ima Jean says. "She was very mild-mannered."

Orin and Ima Jean spent most of their courtship in church or on the playground of the one-room schoolhouse, watching friends play croquet.

"We were sitting on the playground and the rest of the kids were playing croquet when he asked me to marry him," Ima Jean says. "I said, 'Well, I have to think about it.' Then I said, 'Yes.' I didn't want him to think I was anxious."

They were married on Feb. 24, 1947, three months after their first date, by a justice of the peace in Mountain Home.

They honeymooned in Hot Springs, barely catching a ferry across the Buffalo River so they could spend the night in Marshall on the way.

The newlyweds ran Orin's family's farm while his parents were in Arizona. There was no electricity at the farm until 1949, and they didn't have a vehicle to get around until the new truck his parents ordered before they left arrived three months later.

They later moved to Springfield, Mo., so Orin, a retired educator, could go to college.

The Robinsons moved to North Little Rock 14 years ago. They have three children, five grandchildren and five great-grandchildren.

Ima Jean sometimes forgets that 75 years have passed since they exchanged their vows.

He says: “I’ve always said she was the prettiest girl in Brixey Hollow.”

She says: “I’ve always said I was the only one. He was a good person. I liked him.”

He says: “We were waiting for our friends in the courthouse. They were going to be our witnesses. But they were late and the office was about to close. We discovered they had witnesses inside so we didn’t wait for our friends.”

She says: “I was scared we were going to have to spend the night in the car because we couldn’t get on the ferry to go across the Buffalo River.”

He says: “Our family knew her family. We were of the same church persuasion. We were all at the same economic level. I think all those are factors in a lasting relationship.”

She says: “Trust each other. I never worried about him and I hope he didn’t worry about me.”

Ima Jean and Orin Robinson celebrated 75 years of marriage in February. They chose Feb. 24 as their wedding date because their birthdays are Jan. 24 and March 24. “We figured we could remember it,” Ima Jean says. (Special to the Democrat-Gazette)

Print Headline: Postcard from her father cinched the relationship