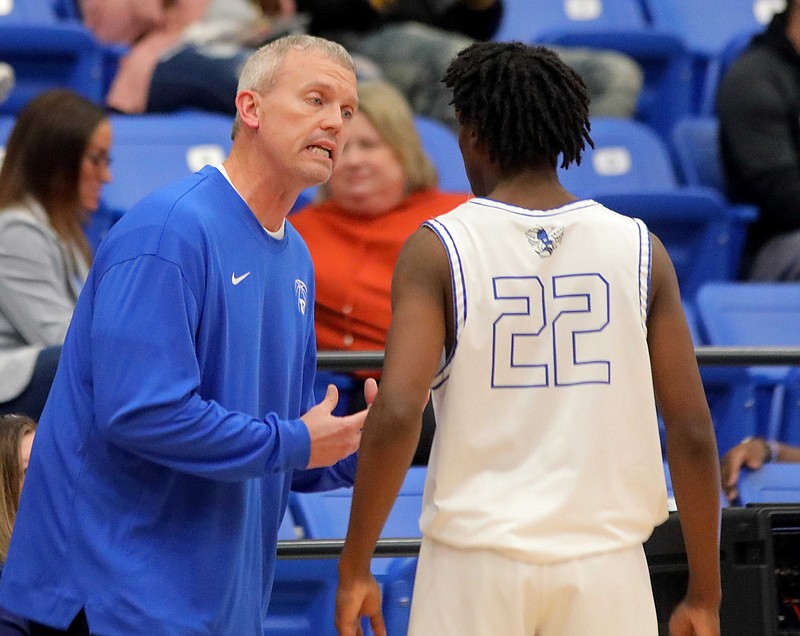 Special to the Arkansas Democrat-Gazette/ STEPHEN B. THORNTON. Bryant's coach Mike Abrahamson talks with a player during their basketball game Tuesday Dec. 14, 2021.

FORT SMITH -- The big shot in The Big Show Tip-Off Classic on Saturday was a single free throw by Bryant's Elem Shelby.

Shelby's free throw with 4.5 seconds left cracked a tie and led to Bryant's 59-56 win over Fort Smith Northside at Northside Arena in the fourth of five games in the inaugural event.

Shelby, a sophomore, missed the second of the one-and-one opportunity but the ball went out of bounds off Northside, and Darren Wallace sank two more free throws after he was fouled with 2.4 seconds left.

Northside turned the ball on the inbounds play.

The win completed a rally from an early 13-point hole for Bryant (2-1), which was playing its third game in three days in three different locations, including North Little Rock on Thursday and Bentonville West on Friday.

"Bentonville West was a four-hour trip and then to come here in this event, which is first class, against a good Northside team and we get down, 12-1," Bryant coach Mike Abrahamson. "We've got a young team, and I'm really proud of their fight and their resilience and their response to adversity. They're growing up in real time right there."

Northside (1-1) jumped to a 12-1 lead in the first four minutes and led 16-3 after consecutive buckets by R.J. Lester, who scored inside and then had a steal and a layup.

Bryant then started chipping away, narrowing the gap to 16-8 after the first quarter.

"That was huge because you've got to chip away at that thing," Abrahamson said. "One of the things I say, and I say a lot of things over and over and over, is you can't win a game in the first quarter but you should can lose it. You can get down so much that you can't overcome that hole. We were able to do that."

The Hornets also trimmed Northside's lead to 25-24 at the half.

"We started off really great, but we got relaxed," Northside coach Eric Burnett said. "They got the momentum going and that's what happens. They play hard whether they're up 20 or down 20."

Northside still led, 42-40, after three quarters but the fourth quarter was back and forth.

Shelby scored on a layup for Bryant with 40 seconds left and Pum Savoy tied the game at 55-55 with a single free throw with 32 seconds left.

The Wildcats put up a pair of 20-point quarters to claim a 30-point win in the opening game.

Har-Ber increased its lead to 38-24 at the half, using an 11-0 run to increase a 27-19 lead with Jake Fotenopulos and Nate Kingsbury each scoring off offensive rebounds in the run.

The Wildcats added 25 points in the third quarter to take control with a 63-38 lead. Kingsbury scored six points in a 10-0 run in the quarter.

Kingsbury scored 17 points to lead a quartet of double-digit scorers for Har-Ber. Kingsbury scored six of his points during the 9-0 first-quarter run. Fotenopulos and Peyton Haskins each scored 11 points off the bench, and Kase Chambless added 10 points.

Camden Curd led Alma (0-3) with 16 points, including a pair of 3-pointers in the second quarter. Matthew Schlegel added 11 points and had three assists.

Southeast opened up a big lead at the half with 28 points in the second quarter.

Southside led 14-11 after Levi Steele hit a jumper to open the second quarter but Southeast went on an 8-0 run on a steal and a layup followed by a slam by Ladainian Fields, a layup by Daiquan Jenkins and a basket inside by Michael Graham.

Juan Pineda hit a pair of 3-pointer for Southeast in the last minute of the half for a 39-26 lead.

Southside (0-1) was led by Yazed Taforo with 20 points and seven rebounds. Steele added 18 points and had eight rebounds.

Parkview (1-1) whittled a 13-point second-quarter deficit to 42-40 after three quarters, but Webb hit a pair of jumpers and drilled a 3-pointer to lead North Kansas City (1-0) on a 13-0 run to open the fourth quarter. Israel Randle hit a pair of 3-pointers in the run and finished with 21 points.

Webb was 13-of-30 from the floor, including 6-of-11 from three-point range. He scored eight points in the first quarter, seven in the second, eight in the third and capped the performance with 11 in the fourth quarter.

Dallas Thomas hit a pair of 3-pointers in the third quarter, and Parkview ended the quarter with a 3-pointer by Drake Marbley and a steal and a slam by Carson Backus for a 42-40 deficit heading into the last quarter.