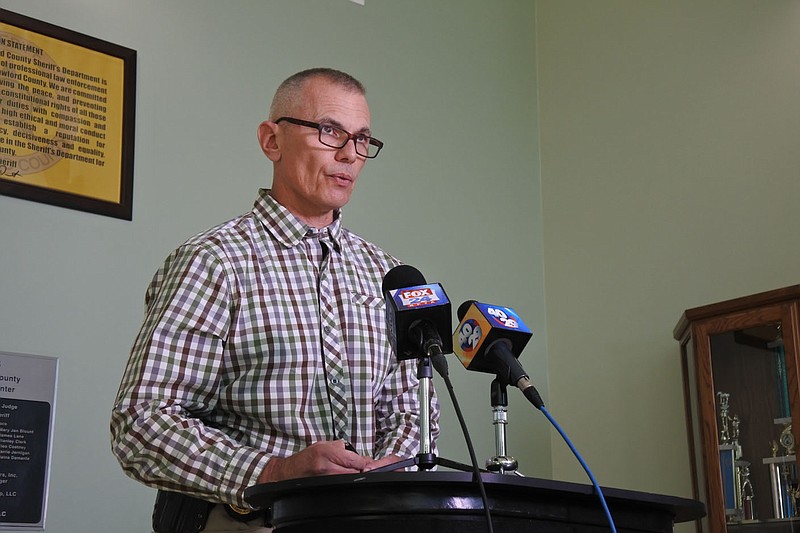 FORT SMITH -- A jury trial concerning a reported use of force by the Crawford County Sheriff's Office was set in federal court last week, the second after a video showing two deputies holding down and beating a man went viral in August.

The trial for Sarah Trammell, 44, of Uniontown is scheduled to start at 9 a.m. Oct. 23, 2023, in Fort Smith before U.S. District Judge P.K. Holmes, according to an initial scheduling order filed Tuesday.

The lawsuit accuses the defendants of violating Trammell's rights under the Fourth and Fourteenth amendments of the U.S. Constitution and, by extension, federal law during an arrest of Trammell on June 19, in addition to committing negligence, battery and assault against her.

A response to the lawsuit filed Monday by Thomas Kieklak, a Springdale-based attorney representing the defendants, denies these accusations. It also requested the lawsuit be dismissed and relief for the defendants.

King was dispatched near Zion Road and Bushong Lane in Van Buren June 19 in response to a call reporting Trammell was going into a van that wasn't hers, according to the lawsuit. King approached Trammell as she was walking in the area and asked for her name. Trammell refused to give King her last name until he explained why he was approaching her and if she was under arrest.

The lawsuit states after Trammell told King her last name was King and she was born that day, King aggressively tried to put Trammell's arms behind her back to handcuff her without provocation or giving a reason for the arrest. A physical altercation then ensued in which King used "violent, excessive force" against Trammell. This included repeatedly pushing, punching and using a stun gun on Trammell's face, head and stomach after detaining her.

Trammell was later treated at a hospital for injuries she suffered, according to the lawsuit.

Trammell pleaded not guilty in Crawford County Circuit Court on June 30 to charges of second-degree battery on a law enforcement officer, breaking or entering, unauthorized use of a vehicle and resisting arrest in connection with her June 19 arrest, according to court records. A jury trial is set for Feb. 23.

Rose and Powell filed a similar lawsuit on behalf of Randal Worcester, 27, of Goose Creek, S.C., on Aug. 29 after King; Levi White, another then-deputy of the Crawford County Sheriff's Office deputy; and officer Thell Riddle of the Mulberry Police Department were recorded using force while arresting Worcester. The arrest occurred about 10:40 a.m. Aug. 21 outside the Kountry Xpress convenience store off Interstate 40 in Mulberry. The video showed the officers repeatedly punching and kneeing Worcester, as well as telling a bystander to get away from the scene.

One of the officers, whom Worcester's lawsuit identified as White, was also shown slamming Worcester's head to the pavement.

Attorney Emily White has said she was appointed as special prosecuting attorney for the Arkansas State Police's independent investigation into the use of force in Worcester's arrest. She received the investigative file from State Police on Sept. 2.

The U.S. Attorney's Office for the Western District of Arkansas, the Department of Justice and the FBI's field office in Little Rock also opened a civil rights investigation into the incident, according to authorities.

White and King were terminated from their positions effective Sept. 29 with a recommendation for decertification due to "excessive use of force," according to records provided by the Arkansas Division on Law Enforcement Standards and Training. They had been suspended with pay following Worcester's arrest.

Riddle is still on administrative leave, according to the city of Mulberry on Nov. 2.

Fort Smith attorneys David Powell and Adam Rose originally represented Randal Worcester in his federal civil rights lawsuit after it was filed Aug. 29. However, U.S. District Court Judge P.K. Holmes granted a motion from Powell and Rose to withdraw as Worcester’s attorneys of record Nov. 1. Worcester is now being represented by Rachel Bussett of the Bussett Legal Group in Oklahoma City.