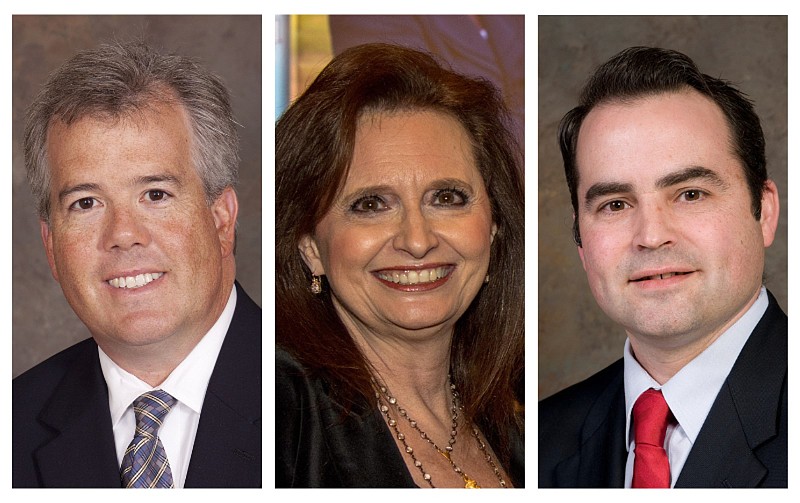 Eric Munson (from left), Julie Benafield and Doug Matayo are shown in these undated file photos. The three are among the members of state Treasurer-elect Mark Lowery's transition team, according to an announcement on Saturday, Nov. 19, 2022. (Arkansas Democrat-Gazette file photos)

State Treasurer-elect Mark Lowery on Saturday announced members of his transition team as he prepares to take over the office starting in January and oversee its investment portfolio of several billion dollars.

Lowery, a Republican state representative from Maumelle since 2013, said in a news release that he started the transition process last week by attending the fall meeting of the State Financial Officers Foundation in Washington, D.C., and starting the interview process with term-limited State Treasurer Dennis Milligan's staff members, who have indicated a desire to be retained.

Milligan of Benton, who has been the state treasurer since 2015, will replace term-limited State Auditor Andrea Lea of Russellville starting in January. Both Milligan and Lea are Republicans.

Before the May 24 Republican primary, Milligan endorsed state Sen. Mat Pitsch of Fort Smith to be the GOP nominee for state treasurer and raised concerns about Lowery's financial history before Lowery defeated Pitsch. After the primary, Milligan said he supported Lowery.

Lowery said those assisting him with the transition include:

• William Cheatham, a former staff operations specialist with the FBI in Washington, D.C.

• Stephen Bright, a former Republican state representative from Maumelle, who is currently director of marketing and communications with the state of Arkansas' Marketing and Redistribution program. He is a former mayor and city director of Maumelle.

Lowery has filed for personal bankruptcy twice, once in 1998 and again in 2017, federal records show. He has been in the process of resolving about $68,000 worth of debts, according to a payment plan adopted in 2019.

Prior to his election as state treasurer in Nov. 8 general election, Lowery said he should not be knocked for exercising a constitutional right to declare bankruptcy, and like many Arkansans, he knows what it's like to struggle financially.