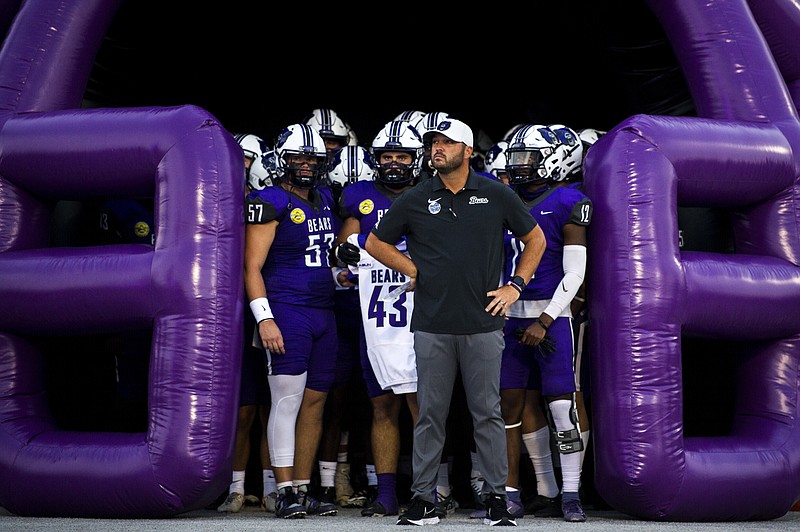 UCA Head Coach Nathan Brown stands with the team in the tunnel before the start of the UCA vs Missouri State football game in Conway on Thursday, Sept. 1, 2022. See more photos at arkansasonline.com/92UCA/..(Arkansas Democrat-Gazette/Stephen Swofford)

CONWAY -- The University of Central Arkansas had a chance to be the outright champion of the ASUN in the conference's inaugural season with a win Saturday night.

Instead, the Bears fell victim to the same things that have ailed them all season long.

The win gave the Gamecocks (9-2, 5-0 ASUN) an undefeated conference record, but because they are transitioning to the Football Bowl Subdivision level, they are ineligible to be the conference champion.

The loss put UCA (5-5, 3-2) in a three-way tie for the top spot among the eligible ASUN teams at 3-2 with Austin Peay and Eastern Kentucky.With the loss, UCA was officially eliminated from postseason contention. The ASUN and WAC share a conference bid, and UCA needed a win and some help to have any hope of a postseason spot.

"If you'd have told me right before the season started that our team could be playing for an outright championship in the final week of the season, [I'd] take it every time," UCA Coach Nathan Brown said. "... I just don't think we performed very well tonight."

Jacksonville State running back Ron Wiggins put UCA in a hole early with rushing touchdowns of 1and 14 yards. Wiggins rushed for 87 yards total, with 85 of those coming in the first half.

But between those came one of the most prominent thorns in UCA's side this season -- its punt-block unit.

Chandler Caughron's punt was blocked by Jacksonville State's Yessman Green. The ball went out of the back of the end zone to give the Gamecocks two points. After Wiggins' second score, Jacksonville State led 16-0.

Brown said the Gamecocks' punt return unit was switching its man protection on punts. He said it was something they fixed after the first attempt, but it put UCA at an early deficit before he had a chance to do so.

Three minutes into the second quarter, quarterback Will McElvain got UCA on the scoreboard with a 21-yard strike to Trustin Oliver to make it 16-7.

UCA has recovered from slow starts before, but the next three minutes would take the game from an uphill battle to an insurmountable climb.

The Gamecocks drove down the field and settled for a field goal on their next drive to make it 19-7. Quarterback Zion Brown accelerated the drive with 73 of his 147 rushing yards.

UCA's Tyion Berry fumbled the ensuing kickoff, and Jacksonville State took over at the Bears' 25-yard line. The Gamecocks converted the mistake into a touchdown one play later on a touchdown toss from Webb to Anwar Lewis to make it 26-7.

UCA's Christian Richmond fumbled on the following kickoff, but Jacksonville State was unable to convert that one into points.

"[Those kickoff fumbles] killed our defense," Brown said. "... [JSU] gets a short field and fortunately our defense rose up and only gave up seven points out of the deal. So it was like deja vu just with a different number. ... We've got to do a better job on ball security. It starts with that, and stuff like that changes games."

Richmond was responsible for two of UCA's four lost fumbles Saturday but neither of his resulted in points.

"The frustrating part for us tonight was just the first half," Brown said. "I mean you have four fumbles, you lose all four and just put your defense in a bad spot. We just couldn't gain any momentum."

UCA actually outgained Jacksonville State 498-443, but a plus-3 turnover margin and the dangerous field position that followed, were too much to overcome.

The Bears forced two Gamecocks fumbles but were unable to secure either. Just over three minutes into the second half, Webb fumbled at the UCA 2-yard line. Unfortunately for UCA, the ball rolled into the end zone and Jacksonville State's Michael Pettway recovered it for a touchdown, making the score 33-10.

UCA struggled to find any consistency running the ball Saturday. Star running back Darius Hale was limited for the fourth game in a row, and other than one 46-yard run, Kylin James was unable to find much success in his stead.

James did punch in UCA's final score from 3 yards out to make it 32-17. The sophomore finished with 67 yards on 13 carries.

The bulk of UCA's offensive success came through the air with McElvain passing for a season-high 349 yards. James was responsible for 106 of those yards as a receiver and redshirt freshman Myles Butler led the team with a career-high 120 yards.

Webb scored once more midway through the fourth quarter to make it 40-17.