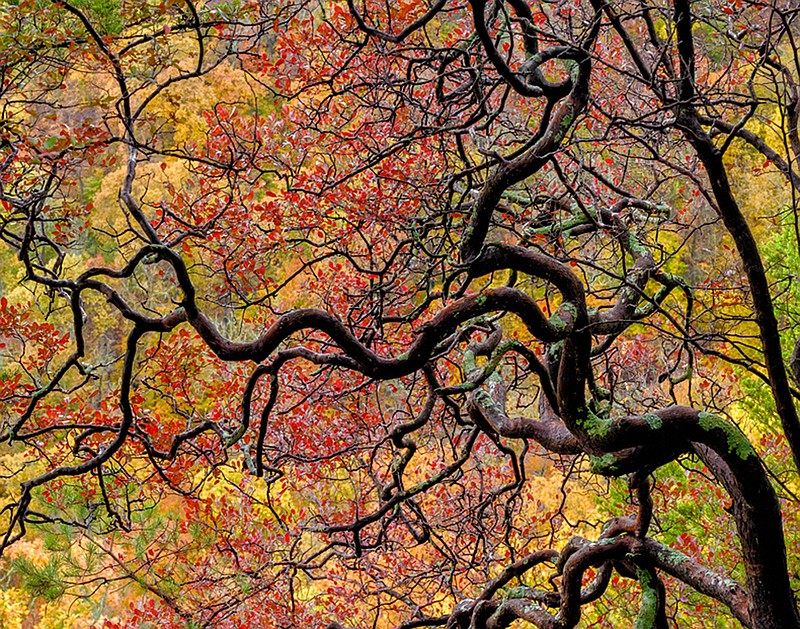 Highbush huckleberry (aka farkleberry) in the Ozark National Forest, from Tim Ernst's "Arkansas Greatest Hits." (Special to the Democrat-Gazette/Tim Ernst)

An era is ending for Arkansas wilderness photographer Tim Ernst.

Ernst is to Arkansas' wilderness what painter John James Audubon was to America's birds, and what journalist David Attenborough is to the nature of the planet. Like them, Ernst has created visual images that inspire awe for the beauty of the natural world.

Ernst says on his website, "I have been hiking, driving and crawling around the wonderful Ozark Mountains for most of my life, preserving the images I see on film for everyone to enjoy."

His large prints and posters depict mountains, waterfalls, trees, bears and the heavens above Arkansas. They adorn the halls of public buildings and private homes. In Arkansas, a person can scarcely go into a state park headquarters, nature center, outdoors store or library without seeing one of his landscapes or trail guides.

For many years in November and December, Ernst has made public presentations to promote his work. He compiles recent photographs to create a screened gallery around some theme -- light, life, solitude, nighttime skies, etc. These programs typically include a short welcome and introduction; a 25-minute synchronized video and slide-show accompanied by music; and a Q&A session.

The audiences ask about how he came to take a particular picture or a novel photographic technique. He answers with funny stories and vivid descriptions, not technical photographic jargon. Afterward, he signs copies of his books.

Ernst has given 1,500 of these programs.

Since typically he gives only one a day, he has devoted more than 4 ½ years to showing his pictures to eager audiences.

However, in a few weeks his public appearances will cease. He says winter 2022-23 will be the last time he will take his show on the road. Ernst had planned to make 2020 his "swan song" tour but was put off by the covid-19 pandemic.

His 10 final presentations will be given in 10 Arkansas cities and feature his new and final picture book, "Arkansas Greatest Hits." An eclectic work, it includes photos from 45 years -- the fruit of something like 3 million snaps of his shutter.

The task of assembling books and the expense of publishing them is "overwhelming," Ernst says. He has turned the task of marketing and distributing over to University of Arkansas Press and the Chicago Distribution Center. He will continue to sign books at the venues where he speaks, but readers generally will need to acquire their copies from a local store or online.

At 67, he no longer wants to spend his time hawking his books. He and his wife, Pam, are back-weary from lifting and hauling all those heavy boxes. His old cottage-industry method of operating a self-publishing enterprise was labor intensive.

Relying on technology and other people to ease his burden, he finds more time to enter the wilderness alone and then share that experience with others online. His new modus operandi does not involve making yet another coffee-table book or making extended speaking tours.

As he moves away from drudgery, there is still fire in his belly for the important things: solitude, creativity and the difficult artistic work required to photograph a scene in a way that inspires everyone who views it.

In a late October interview, Ernst talked about "what makes a good day for me now."

"The day before yesterday," he said, "I got up at 4:30 or 5 and in the dark, pouring rain drove over to a spot near where we used to live and hike. It's called Hawksbill Crag. I think that's the first time I've been there in several years. When I got down there, for a brief period, it stopped raining.

"Fall color was just spectacular, but I don't think that I got any images of Hawksbill Crag on that trip that was any better than what I had previously taken. I was there for three hours and never saw another person.

"People tell me all the time you can't go there without seeing people. Well, yes you can. You've got to get up early on a rainy day. For three hours I waited, I wasn't shooting the whole time, I was hoping for some spectacular light happening, and I thought it never would. That is pretty much the way it is, the way that I have worked all these decades.

"People want to know what I'm looking for — it's great light! You can take an ordinary subject, and if you have great light on it, it can be a very interesting image. You can take a picture of an icon like Hawksbill Crag, and if the light is just kind of ordinary, so is the snapshot.

"Light was what I shopped for Thursday. While waiting for that great light, I wandered on around to a favorite high bush huckleberry that I have been watching for three or four decades. It was just spectacular! And the light behind it was spectacular too!

"The plant is unique, and very common along bluff lines. When people see my pictures of it they say, 'Oh my gosh, I've never seen anything like it.' If they went to Hawksbill Crag, they actually laid their hands on probably a dozen. It looks like a Japanese bonsai tree.

"I had photographed it before with the background in shadow. But the day before yesterday, the background was in full fall color. So it's a multilayered image that I've never taken before. It's taken me 40 years to get that picture! That's what I wanted, but that wasn't what I went there after.

"Any day we get to go out and spend three hours on the trail in the fall is a great day for me."

WRITING WITH AN IMPACT

He is the author of more than a dozen hiking guidebooks, including "Buffalo River Hiking Trails," "Arkansas Hiking Trails" (then-President Bill Clinton wrote the foreword) and "Ouachita Trail Guide." "Arkansas Waterfalls Guidebook" details more than 200 falls, with color photos of each one.

These books have sold more than 100,000 copies nationwide.

Ernst has written an online journal since 1998, but it has changed names.

The first version, called "Cloudland Journal: Book I," is available as a physical book and as a Kindle ebook through Amazon. It is an account of Ernst's personal discovery of the area around his log cabin set in the Buffalo River wilderness. In it Ernst "hangs out with wild bears, talks to trees, hikes in the moonlight, laughs and cries as he discovers his innermost self."

"Little Bluff Journal" was the same journal, cataloging Ernst's day to day adventures, but he changed the name after selling the cabin and moving 12 miles away. Before he moved, he lived in his Roadtrek camper. A few days in, he tells about a visit to Minnesota in which he reconnected with his ancestral family and revisited his boyhood haunts via canoe -- photographs included, naturally.

The current journal, viewable on his website, is "Currentjournal." In this permutation, his day to day activities take him farther afield -- like to the Rocky Mountains of Colorado, the hiking trails of Wyoming and the Atlantic Coast of Maine. Recent entries tell about hiking in Nova Scotia, rescuing a kitten with a can stuck on its head, the virtues of a Greenland paddle, looking for ocean glass and repairing the fascia of his home while standing atop a ladder on a windy day.

The journal, in all its forms, has attracted many readers, who comment on the narrative. One reader posted, "I try to go outdoors to hike and enjoy nature every day, but when I can't, I read Tim Ernst's journal."

When the entrepreneurial Tim Ernst began forging his career in 1977 as a full-time outdoors photographer, there was no clear pathway. It was certainly not clear how a regional hiking enthusiast with a camera, little money and no connection to the publishing industry could do so. Before he made his mark, such photography was a pastime engaged in by hobbyists and freelancers who made their living some other way. He blazed a trail for himself by trying things, which worked then but that he is now abandoning. Thus, no more presentational tours, no more picture books.

The photography classes that he once taught to help keep the wolf from the door have been discontinued, too. "After more than 35 years of teaching outdoor photography workshops, all of my photography students have left the building," he says.

Paper-based publications are giving way to electronic platforms. He made a clean break from film to digital photography in 2000, but only when Canon's quality of digital imagery became equal to film.

He has opened a gallery, Tim's Canvas Prints Gallery, 1.1 miles off the highway between Ponca and Jasper. There, he displays his prints and Pam's pastel paintings. The gallery remains open on selected weekends, but he no longer routinely packages, mails or bills from there.

The focus of his efforts these days is creating new content, updating trail guides and doing more travel. He continues to experiment with photographic technique and with literary forms. A case in point is his book "The Search for Haley." It is an insider's account of the search for 6-year-old Haley Zega, who got lost while hiking in one of the most remote and rugged wilderness areas in the central United States. Differing significantly from his other work in theme and narrative style, it displays his range as a writer.

FOCUS ON THE SUNSET

After capturing so many sunrises through the lens of his camera, he finds much to do as he approaches the sunset of his life. He recently bought a two-person inflatable kayak in which he hopes to make photographic float trips. That may give his camera a different perspective. Age and health concerns have changed some things, but he still has bucket-list objectives and he has imagined other pictures he wants to take.

He has little concern about who will carry on his publication enterprise. "I have no children of my own to take over the family business, so to speak," he says. "My stepdaughter has her own profession as a CPA in Springfield." It may be premature to have that conversation.

When asked, "Will serene, pristine locations remain for future generations to enjoy?" Ernst answered: "That's a good question. Overpopulation is the biggest threat to all of that. But I'm very optimistic, because we've got Yosemite and Yellowstone in the world, and those are just a minuscule part of what the total wild lands are on the planet.

"Most people will never see vast acres of wild land. It will never get crowded. It'll always be with us, I believe. Oh, there will be popular places, the easy places to get to, and that's where the large congregations of humans will go. And there is degradation of the wilderness resource when that happens, no matter if it's a water feature or mountaintop. If you've got 10,000 people in one spot, unless it's paved over, then it's not going to be good for it.

"But by the same token, when you take those 10,000 people and disperse them onto three sites, then you're tripling in many cases the damage. So, I find that it's better to have a paved trail someplace and show the masses those places."

Preserve the wilderness for those who long to wander.

"Obviously," he added, "climate change is having a dramatic effect all over the planet, and so there's no telling what that is going to do. I have no idea what our planet is going to be like in 2100, but right now I'm very optimistic."

If the optimistic future Tim Ernst envisions does not match reality, his photographs will remain to document the unspeakable beauty of the past.