Incumbent president expected to get easy win in Kazakh race 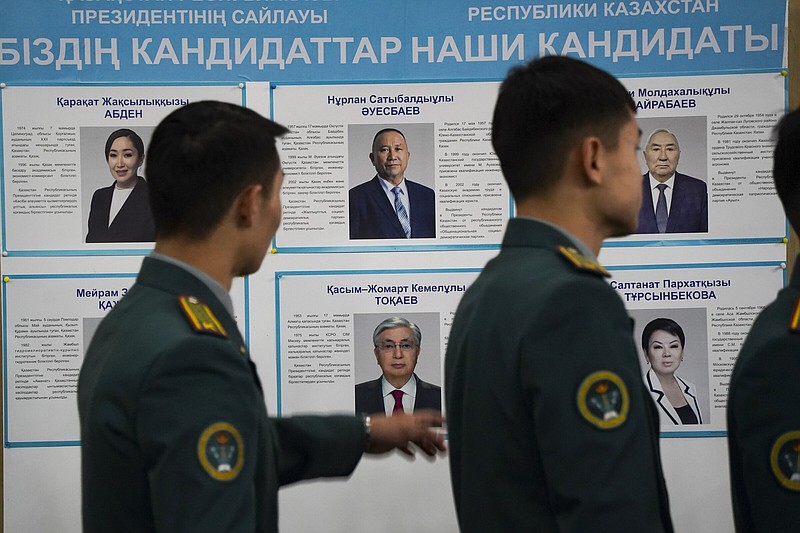 National servicemen lineup to cast their votes next to a poster showing presidential candidates at a polling station in Almaty, Kazakhstan, Sunday, Nov. 20, 2022. Kazakhstan's president appears certain to win a new term against little-known challengers in a snap election on Sunday. Five candidates are on the ballot against President Kassym-Jomart Tokayev, who faced a bloody outburst of unrest early this year and then moved to marginalize some of the Central Asian country's longtime powerful figures. (Vladimir Tretyakov/NUR.KZ via AP)

ASTANA, Kazakhstan -- Kazakhstan's incumbent president is widely expected to secure an easy victory in Sunday's snap election that came after bloody unrest shook the country this year and he moved to stifle the influence of his authoritarian predecessor.

Five candidates were on the ballot against President Kassym-Jomart Tokayev. With a short campaign period that began in late October, they had little opportunity to mount significant challenges. Tokayev, apparently confident of holding a strong advantage, stayed away from a nationally televised election debate.

The national elections commission said voter turnout averaged 69% in 10 of the country's 15 regions by the time polls closed.

The election for a seven-year term came as Tokayev has taken steps to keep Kazakhstan's distance from longtime ally and dominant regional power Russia. He pointedly said the country did not recognize the Ukrainian regions that Russia declared to be sovereign states at the outset of the conflict that began in February.

Kazakhstan has taken in hundreds of thousands of Russians who fled after President Vladimir Putin issued a conscription order in September.

When Tokayev became president in 2019 following the resignation of Nursultan Nazarbayev, he was widely expected to continue the authoritarian course of the man who had led the resource-rich country since it gained independence from the Soviet Union. Nazarbayev remained highly influential as head of the national security council, and the capital was renamed Nur-Sultan in his honor.

Then a wave of violence arose in January, when provincial protests initially sparked by a fuel price hike engulfed other cities, notably the commercial capital, Almaty, and became overtly political as demonstrators shouted "Old man out!" in reference to Nazarbayev. More than 220 people, mostly protesters, died as police harshly put down the unrest.

Amid the violence, Tokayev removed Nazarbayev from his security council post. He restored the capital's previous name of Astana, and the Parliament of Kazakhstan repealed a law granting Nazarbayev and his family immunity from prosecution.