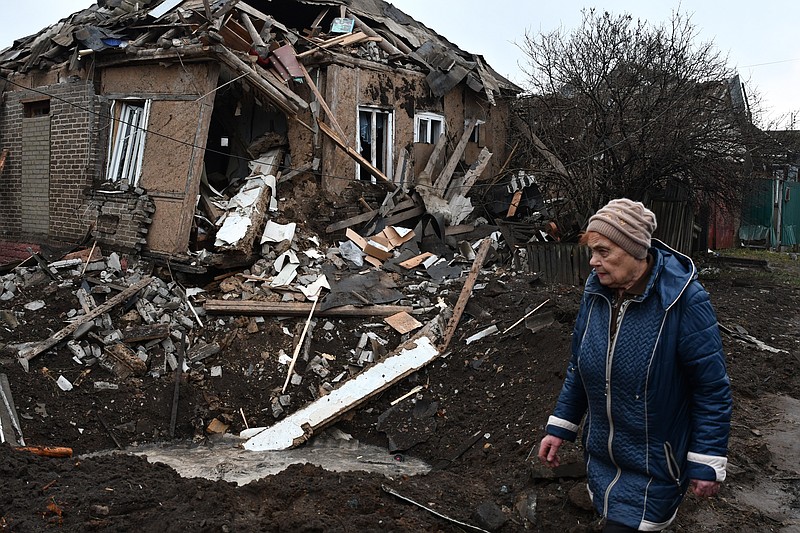 A woman walks past her house that was damaged in Russian shelling in Kramatorsk, Ukraine, Saturday, Nov. 19, 2022. (AP Photo/Andriy Andriyenko)

Rafael Mariano Grossi, the director general of the International Atomic Energy Agency, said multiple explosions near the plant -- on Saturday evening and again on Sunday morning -- abruptly ended a period of relative calm around the nuclear facility that has been the site of fighting between Russian and Ukrainian forces since Russia invaded on Feb. 24.

The fighting has raised the specter of a nuclear catastrophe ever since Russian troops occupied the plant during the early days of the war.

In renewed shelling both close to and at the site, IAEA experts at the Zaporizhzhia facility reported hearing more than a dozen blasts within a short period Sunday morning and could see some explosions from their windows, the agency said.

Later in the day, the IAEA said the shelling had stopped and that its experts would assess the situation today.

"There has been damage to parts of the site, but no radiation release or loss of power," the agency said.

Still, Grossi called the shelling "extremely disturbing," and appealed to both sides to urgently implement a nuclear safety and security zone around the facility.

"Whoever is behind this, it must stop immediately," he said. "As I have said many times before, you're playing with fire!"

Russia has been pounding Ukraine's power grid and other infrastructure from the air, causing widespread blackouts and leaving millions of Ukrainians without heat, power or water as frigid cold and snow blankets the capital, Kyiv, and other cities.

Ukraine's state nuclear power operator, Energoatom, said Russian forces were behind the shelling of the Zaporizhzhia plant, and that the equipment targeted was consistent with the Kremlin's intent "to damage or destroy as much of Ukraine's energy infrastructure as possible" as winter sets in.

The weekend strikes damaged the system that would enable the plant's power units 5 and 6 to start producing electricity again for Ukraine, the power operator said. The State Nuclear Regulatory Inspectorate of Ukraine hopes to bring the two units to a minimally controlled power level to obtain steam, which is critical in winter for ensuring the safety of the plant and the surrounding area, Energoatom said.

The shelling also damaged water storage tanks, a steam purge generator system and other equipment, Energoatom said in a post on the Telegram messaging app.

Russia's nuclear agency, Rosenergoatom, blamed Ukraine's military for the shelling. An adviser to the company's director general, Renat Karchaa, told state-owned Russian news agency Tass that 15 shells had landed and that a building where nuclear fuel is stored had been hit.

As a safety measure, all of the reactors have been cycled down. The full extent of the damage to the facilities was not immediately clear.

Elsewhere in the Zaporizhzhia region, Russian forces shelled civilian infrastructure in about a dozen communities, destroying 30 homes, Ukrainian President Volodymyr Zelenskyy's office said Sunday. Twenty buildings were damaged in shelling at Nikopol, a city across the river from the Zaporizhzhia plant, it said.

In his evening address, Zelenskyy said Ukrainian forces were making small gains in the eastern Luhansk region and were holding their ground in battles in the south.

Blackouts were scheduled Sunday night in 15 regions of Ukraine and the city of Kyiv, Zelenskyy said. The country's power utility, meanwhile, said there would be scheduled outages in every region today.

"The restoration of networks and technical supply capabilities, the de-mining of power transmission lines, repairs -- everything goes on round the clock," Zelenskyy said.

The situation in the southern Kherson region "remains difficult," the president's office said, citing Ukraine's armed forces. Russian forces fired tank shells, rockets and other artillery on the city of Kherson and several nearby settlements that were recently liberated by Ukrainian forces.

Shelling late Saturday struck an oil depot in Kherson, igniting a huge fire that sent billowing smoke into the air. Russian troops also shelled people lining up to get bread in Bilozerka, a town in the Kherson province, wounding five, the report said.

In the city of Kherson -- which still has little power, heat or water -- more than 80 tons of humanitarian aid have been sent, said local official Yaroslav Yanushevych, including a UNICEF shipment of 1,500 winter outfits for children, two 35-40-kilowatt generators and drinking water.

In the days since Russian forces retreated from Kherson and Ukrainian forces swept into the city, the government has scrambled to assess the humanitarian situation and rebuild vital infrastructure, working tirelessly to restore basic services. As temperatures begin to plunge, the first traces of power have reappeared in the city in recent days.

Speaking Saturday in the port city of Mykolaiv, about 40 miles to the northwest of Kherson, Iryna Vereshchuk said the government would also help residents there evacuate. Mykolaiv is a frequent target of Russian missile strikes, and residents of both cities have asked to be moved to safer areas, she said.

Many of those who remain are older or infirm.

Even before Ukrainian forces reclaimed the city, thousands of civilians left occupied Kherson. Then, as the city was slipping through Russia's fingers and Russian forces prepared to retreat, the occupation government said residents should leave for territory still under Moscow's control east of the Dnieper River or into Russia itself.

Also on Sunday, a funeral was held in eastern Poland for the second of two men killed in a missile explosion Tuesday. The other man was buried Saturday. Poland and the head of NATO have both said the missile strike appeared to be unintentional, and was probably launched by Ukraine as it tried to shoot down Russia's missiles.

Ukraine says it will investigate video footage circulated on Russian social media which Moscow alleged shows that Ukrainian forces killed Russian troops who may have been trying to surrender, after one of the men seemingly refused to lay down his weapon and opened fire.

"Of course Ukrainian authorities will investigate this video," Olha Stefanishyna, Ukraine's deputy prime minister overseeing the country's push to join the European Union, said on the sidelines of a security forum in Halifax, Nova Scotia.

Russian authorities announced the opening Friday of a criminal investigation based on the snippets posted on Russian Telegram channels and relayed on other social media. They present a muddled and incomplete picture.

Stefanishyna, however, said Ukrainian forces are "absolutely not interested in the execution of anybody" and are under direct orders to take "as many prisoners of war as we can" so they can be swapped in prisoner exchanges with Russia.

"Every potential executed Russian soldier is some Ukrainian that is not able to be exchanged, so the spirit and logic is not there," she said.

"HRMMU is aware of the video and is looking into it," it said in a statement to The Associated Press. "We reiterate our call that all such allegations should be properly and promptly investigated by respective authorities."

Asked if Ukraine will allow an international investigation, Stefanishyna said: "We will see. No problem with that."

In the nearly nine-month invasion, Moscow's forces have committed widespread abuses and alleged war crimes, according to the United Nations, rights groups and reporting by The Associated Press.

Matilda Bogner, who heads the U.N. monitoring mission in Ukraine, said earlier this week that Ukrainian troops are suspected of some abuses, too.

"We have received credible allegations of summary executions of persons hors de combat, and several cases of torture and ill-treatment, reportedly committed by members of the Ukrainian armed forces," Bogner said.

The video snippets that Russia claimed pointed to an execution could not be independently verified.

The longest snippet, 36 seconds long and with cuts, shows a group of about 10 men in full military gear, some lying on the ground and others emerging one by one from an outbuilding with their hands raised, apparently unarmed. Under orders shouted by someone off-camera, they join the others already on the ground.

Some of the men wear red bands on their lower legs. Red or white identifying marks are sometimes worn by Russian and Russia-aligned troops to identify them as members of the Kremlin's invasion force.

The video also features other men watching them, shown to be armed and wearing flashes of yellow on their arms, legs and helmets.

Ukrainian forces often wear bits of yellow, blue or green to identify themselves on the battlefields.

One man with a yellow armband appears to be holding the camera. Another, also with a yellow armband, is shown lying on the ground with a heavy machine gun and belts of ammunition. At least two other armed men wearing glimpses of yellow also appear to be watching the apparent surrender.

In the last few seconds of the video, a man emerges from behind the outbuilding. He appears to be armed. Amid what sounds like sustained gunfire, the video then becomes too blurred to see what happened next. The video cuts off a few seconds later.

A separate, 8-second and soundless snippet appears to show those final moments slowed down. As he emerges, the apparently armed man appears to raise a rifle and open fire, with the muzzle of the gun emitting puffs of smoke.

Another separate snippet of video, 25 seconds long and seemingly shot with a drone, appears to show the same men lying motionless, amid what appears to be pools of blood.

Where and when the videos were filmed wasn't clear. Mostly leafless trees in the backgrounds appear to suggest a fall or winter time frame.

Andrey Marochko, a man who identified himself as a Russian officer based in Ukraine's Luhansk region, claimed on Telegram that the footage was filmed in Makiivka, a village in the occupied region of eastern Ukraine. Russian media gave the same location. Ukrainian forces claimed to have regained control of the front-line village earlier this month.

Information for this article was contributed by John Leicester, Hanna Arhirova, Kirsten Grieshaber, Rob Gillies and Elise Morton of The Associated Press and by Megan Specia and Matthew Mpoke Bigg of The New York Times. 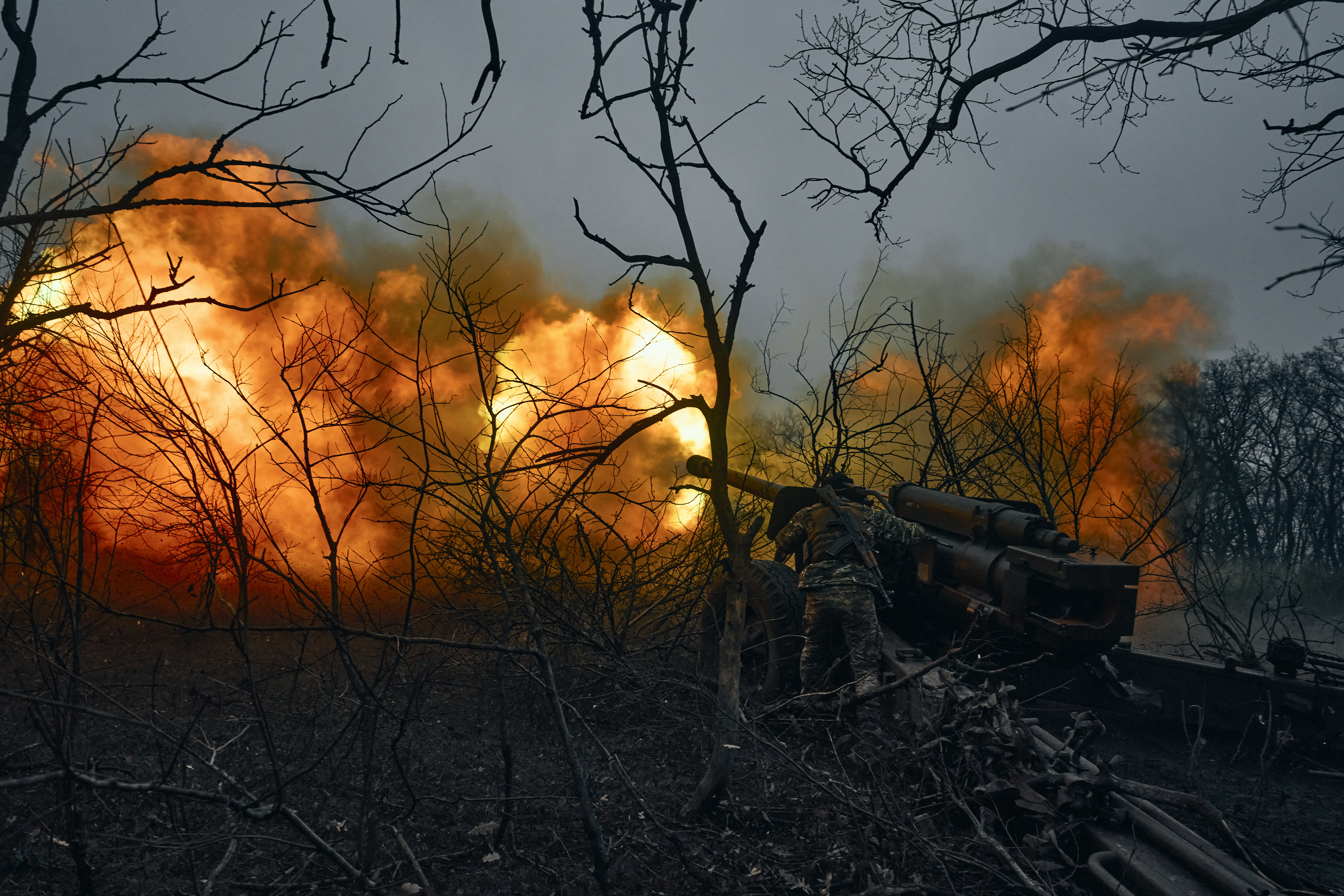 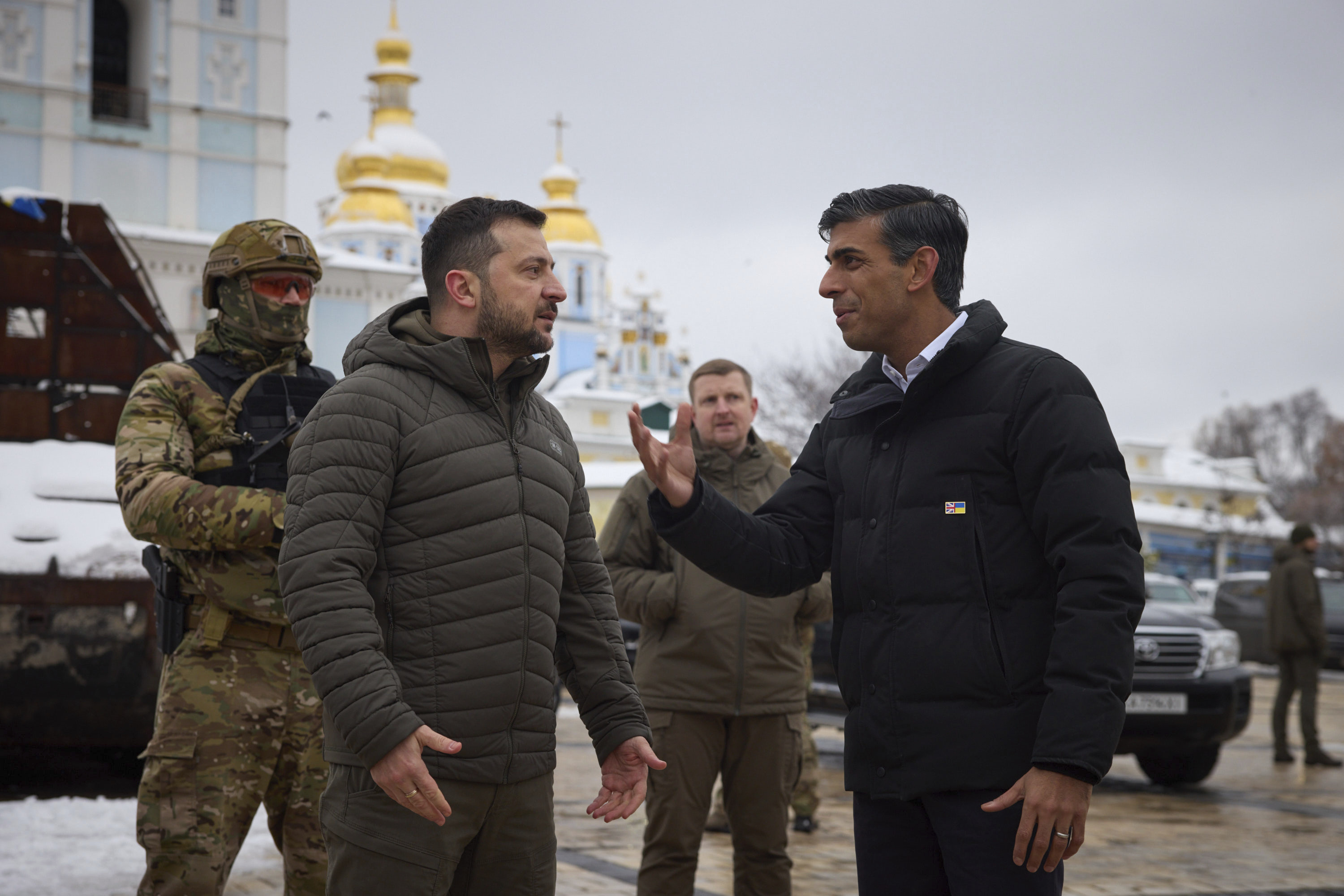 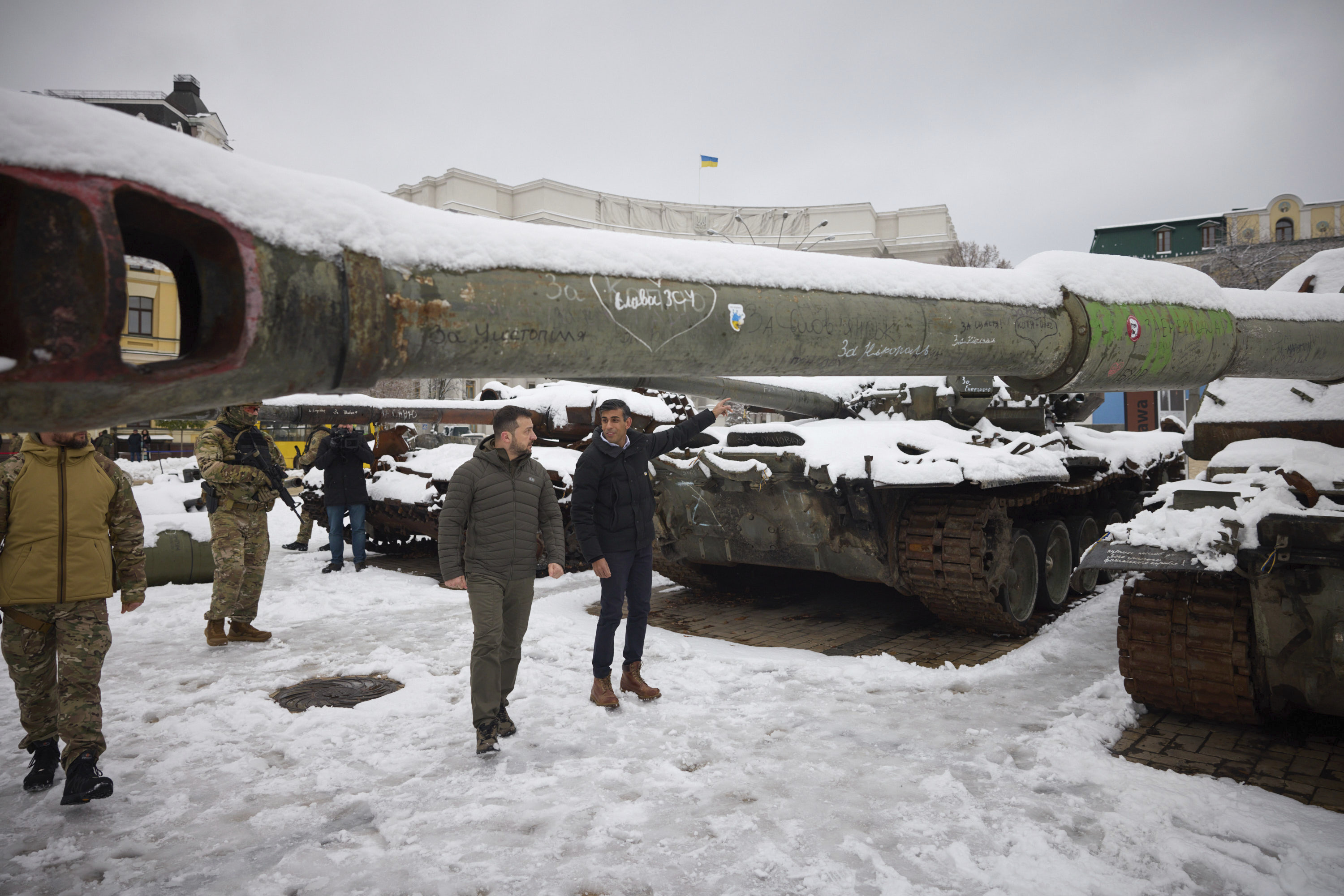 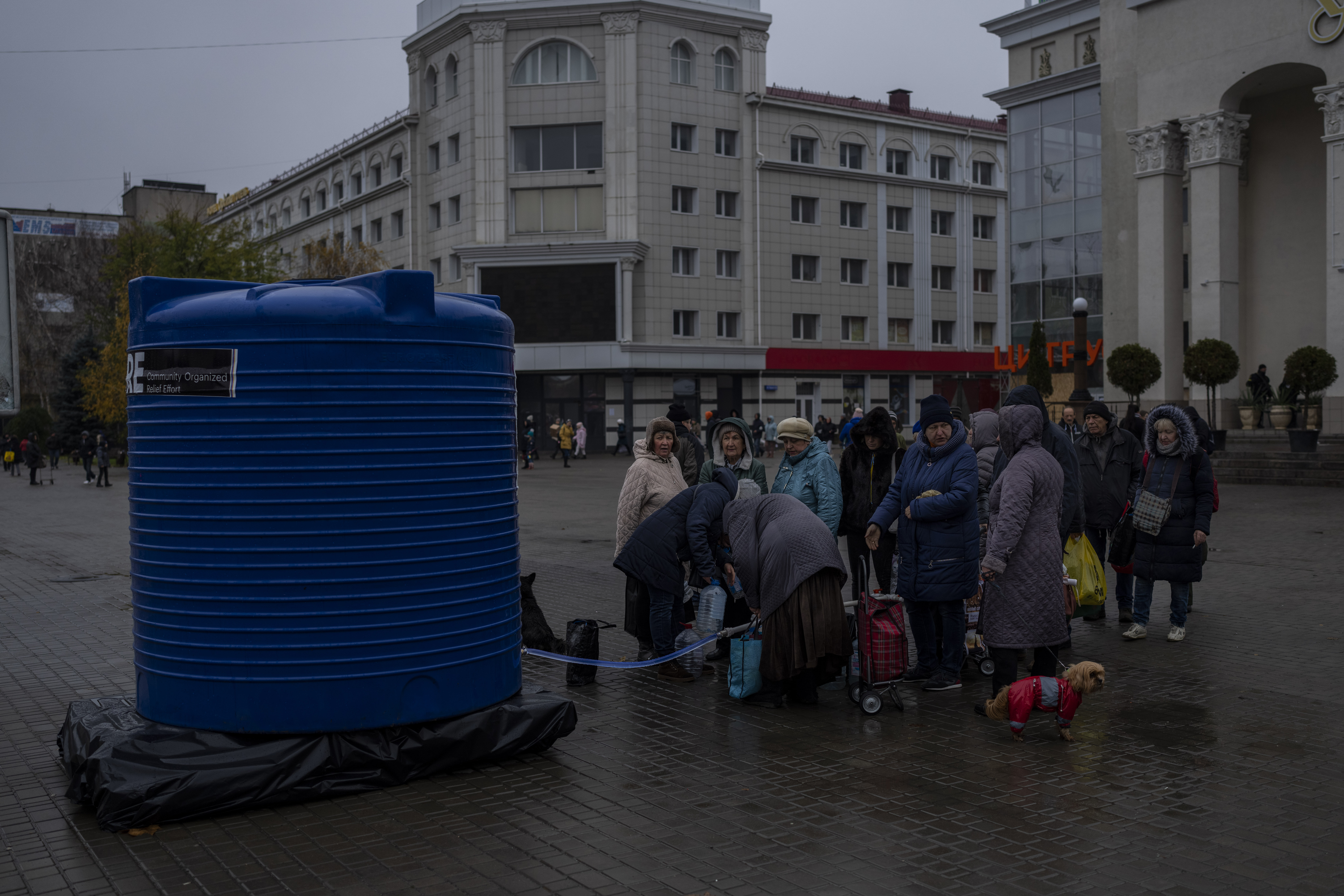 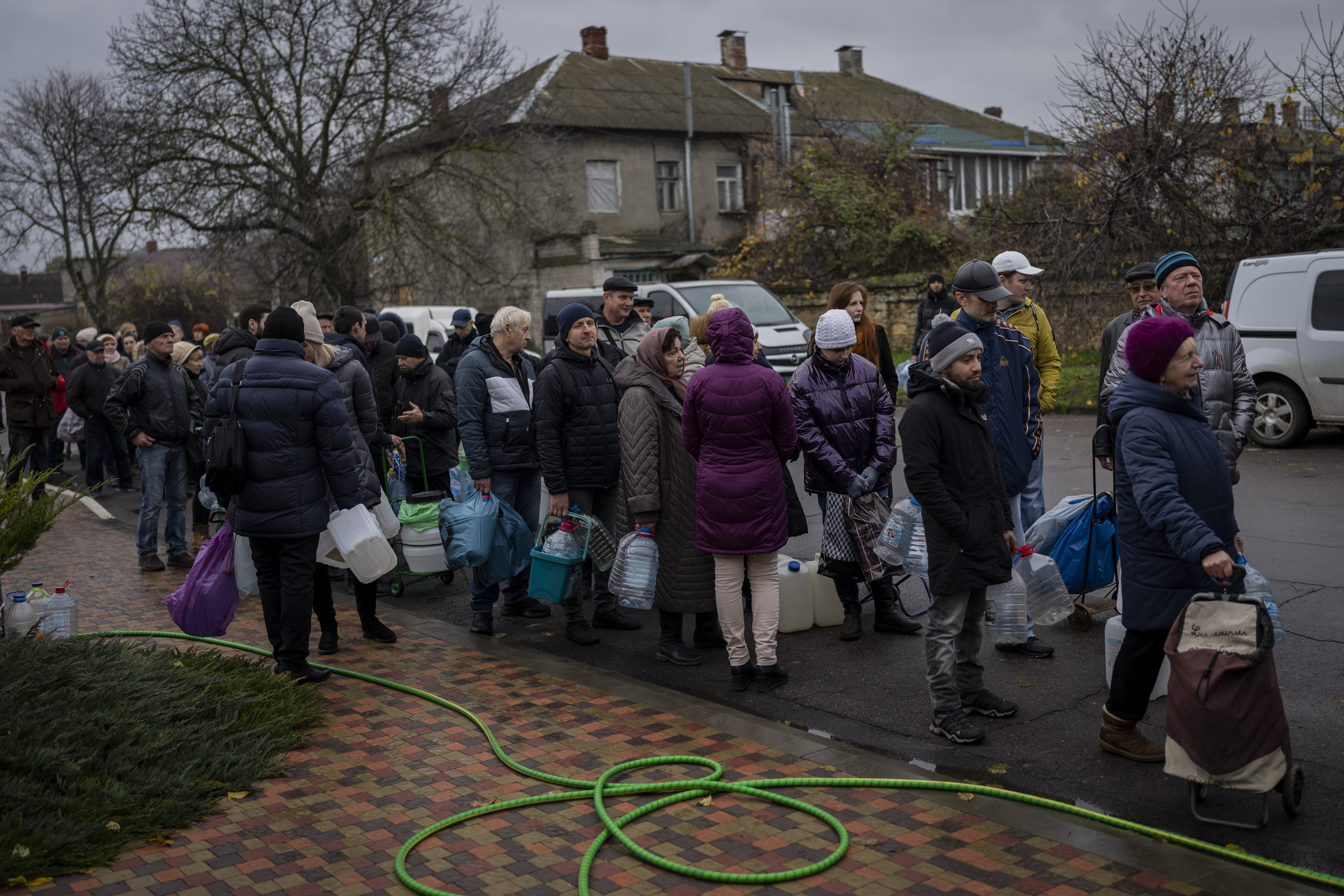 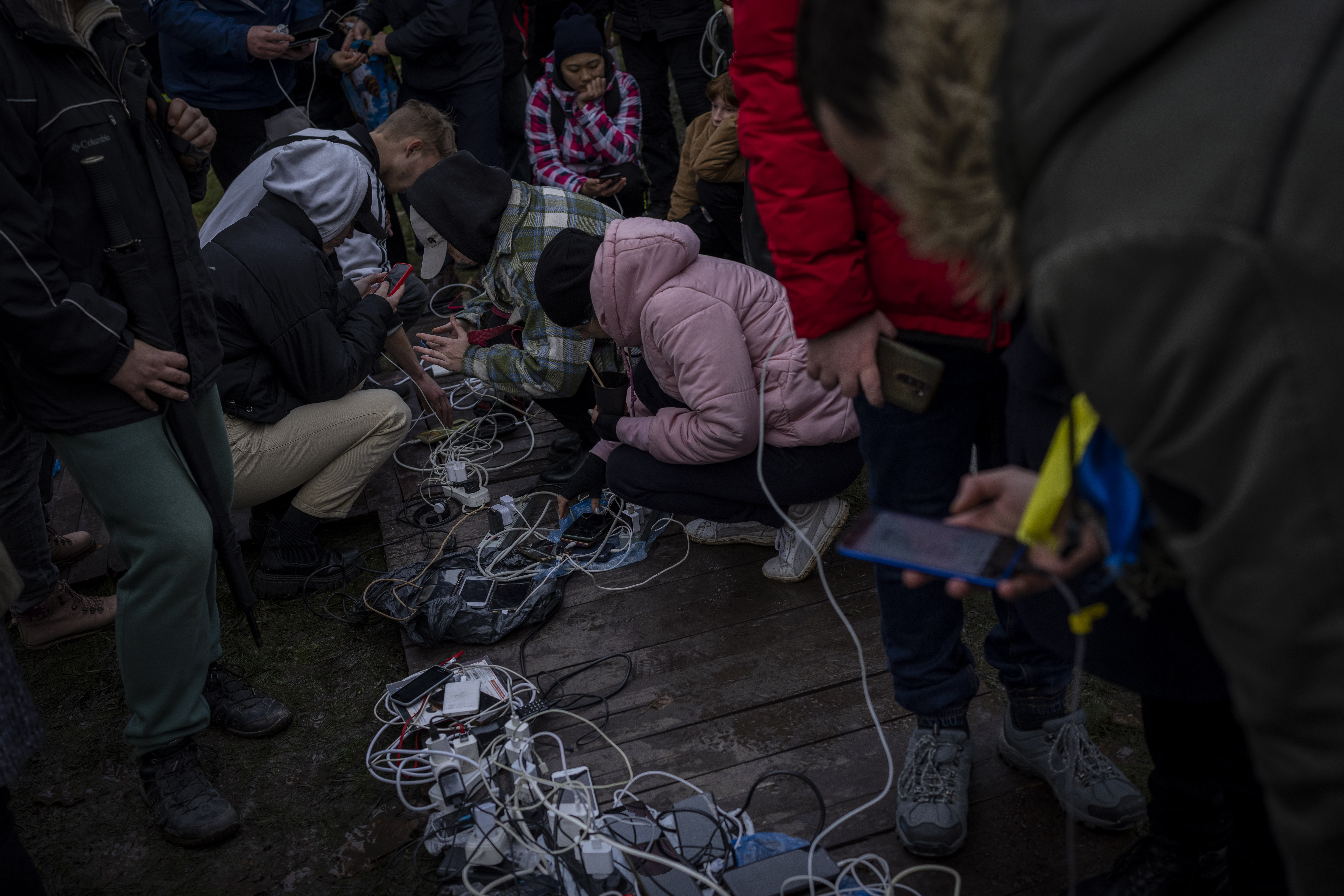 Residents plug in mobile phones and power banks at a charging point in downtown Kherson, southern Ukraine, Sunday, Nov. 20, 2022. Russian forces fired tank shells, rockets and other artillery on the city of Kherson, which was recently liberated from Ukrainian forces. (AP Photo/Bernat Armangue) 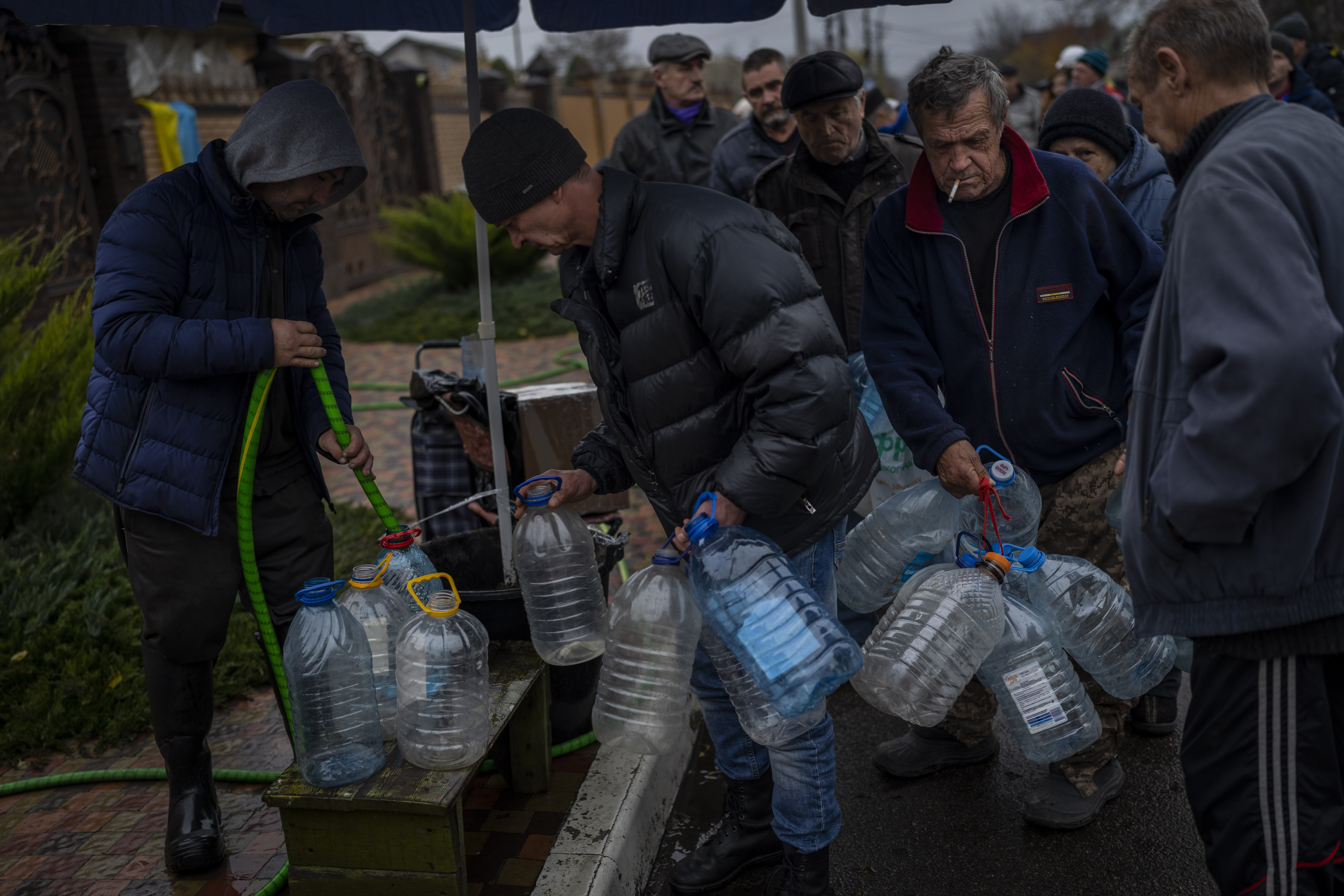 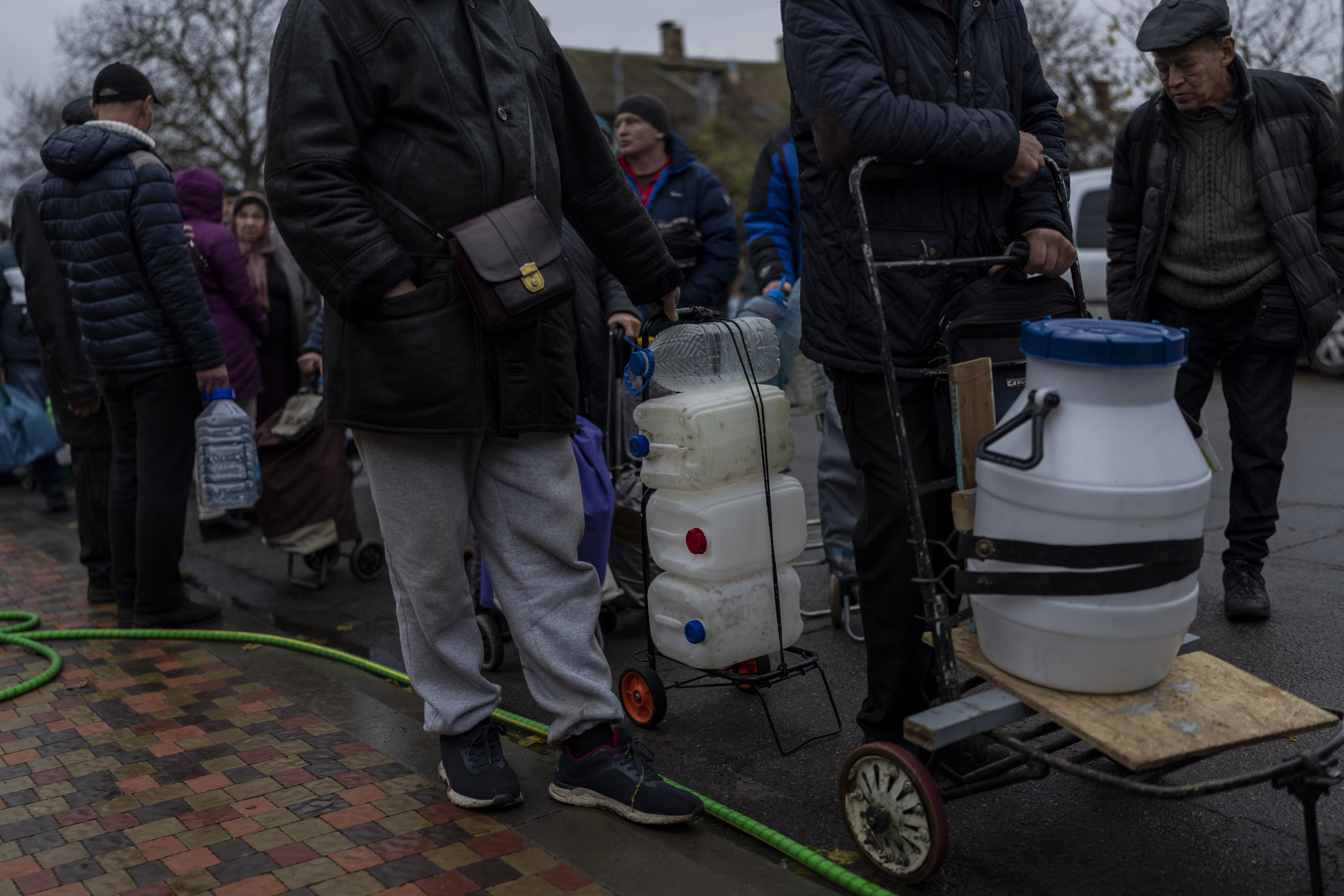 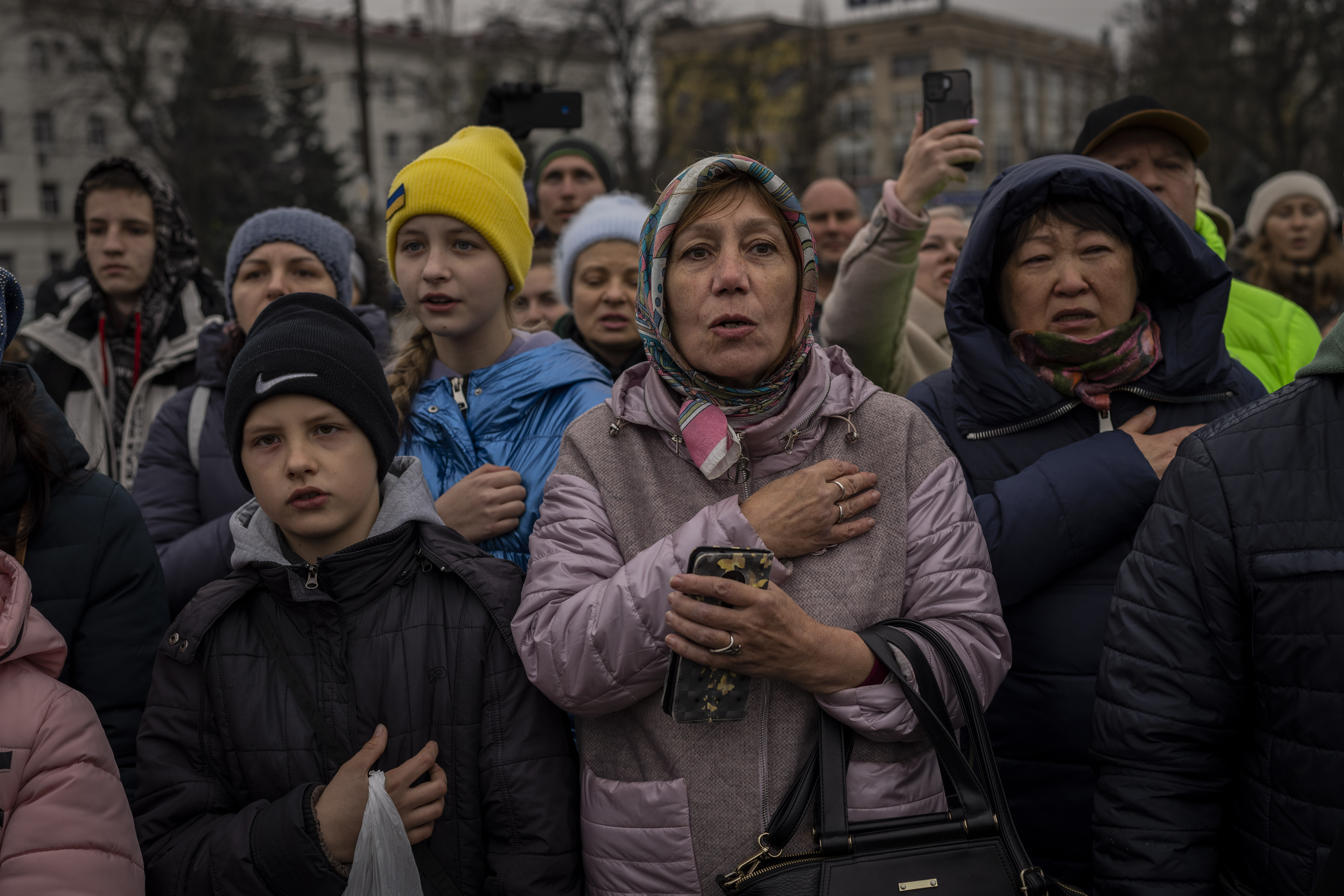 Residents sign the Ukrainian national anthem during a gathering in downtown Kherson, southern Ukraine, Sunday, Nov. 20, 2022. Russian forces fired tank shells, rockets and other artillery on the city of Kherson, which was recently liberated from Ukrainian forces. (AP Photo/Bernat Armangue)