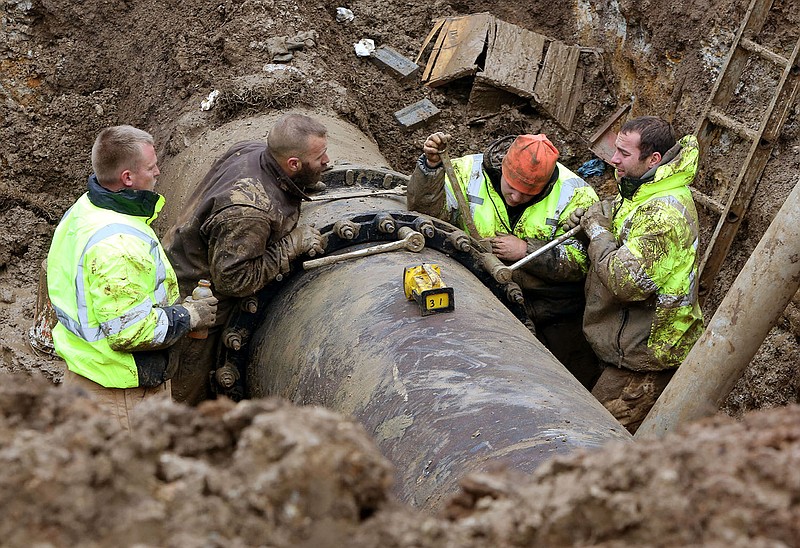 The Springdale Water Utilities requires area contractors to place ductile iron pipe to bring water and sewer service to homes and buildings. But, right now, ductile iron pipe is hard to get. The lead time is nearly a year, say directors of Northwest Arkansas utilities.

The Springdale Water and Sewer Commission, which oversees the utility, has given utility staff the OK to OK the use of PVC pipe -- or polyvinyl chloride, a plastic product. The commission also said staff can wave iron pipe requirements on a case-by-case basis without commission approval each time.

Experts said they don't see much difference in the overall quality of two kinds of pipe, and they don't expect more leakage, breaks or other problems.

Customers probably will see no difference to their service no matter what goes underground, said Wen Zhang, an associate professor of civil engineering at the University of Arkansas, Fayetteville.

Ductile iron -- a type of cast iron -- is known for its impact resistance to fatigue and wear, according to the website of the Ductile Iron Pipe Research Association. It does not fracture as easily with impact, the website says.

Carbon is added to cast iron in the smelting process. Spherical graphite structures in the metal make the iron ductile.

PVC provides affordability, faster and more flexible installation and durability, according to the Plastic Pipe and Fittings Association website.

PVC in the United States is made from natural gas and salt, according to the website.

"I still prefer ductile iron, but we will accept something else as long as we are able to sleep at night," Ward said. "I'm not going to worry if we have one pipe or 50 pipes that are PVC."

But when the supply chain goes back to normal, the utility will go back to its iron pipes, Ward said.

Pipes made of PVC cost less under normal market conditions than those made of ductile iron, Ward said. But PVC requires specific bedding that surrounds the pipe. Properly installed, the bedding evens the points of pressure from the water pumped through the pipe -- especially if that pipe is going to be there for a long time.

Ductile iron is stronger than PVC, Pulvirenti said. But iron is subject to erosion, which the utility has found in pipes buried around the utility's water tank farm in the eastern part of town, Ward said.

The utility has taken steps to mediate the erosion by attaching sacrificial anodes to the pipe to attract the electrical charges that eat at the metal, he added.

PVC is currently running about $95 for a 100-foot piece of 8-inch-diameter pipe, Pulvirenti said. Ductile iron cost about the same, he said.

Engineers and contractors must consider the lifetime cost of the two pipe materials. This includes upkeep, repair and replacement, Pulvirenti said.

Zhang said PVC pipe is a very good choice for pipelines. It is not subject to corrosion. She said today's PVC pipe should last about 70 years. The typical lifespan for any type of pipe is 50 to 100 years, she said.

Ward said he always will use PVC on deep sewer lines -- with pipes buried at 15 feet. Digging that deep for repairs creates the risk of the walls collapsing.

The long-standing standard for the city's water and sewer mains has been ductile iron, lined with epoxy, Pulvirenti said. But the lining can flake off, leaving exposed metal, subject to erosion, he said.

That lining is on the interior of sewer pipes, but external in water lines, so that epoxy is not getting into the drinking water, Ward noted.

Clay is a good material and was used throughout history, Ward said, citing aqueducts of ancient Rome. The Acqua Vergine, built in 19 B.C., has been restored several times and supplies water to the Trevi Fountain in the heart of the modern city.

But clay pipes are known for leaking at joints, Ward said.

The city code allows many types of pipes for individual building projects, explained Mike Chamlee, director of the Springdale Building Department. Most pipe running from the city's mains to individual buildings is already PVC, he said.

Ductile iron is used for main lines holding lots of pressure, he explained.

Numerous homeowners have found that the rocky soil of Northwest Arkansas will settle against a PVC pipe with a sharp edge of the rock boring a hole in the pipe.

Ward was one of these homeowners, and the repair cost nearly $4,000, he said.

The problem could be alleviated by using thicker PVC, burying the pipe at the proper depth and installing adequate bedding, he said.

A 10-month wait for ductile iron pipe can significantly delay a project. PVC suppliers are telling local officials delivery time for their products is a few weeks, Ward said.

Ward said he understood the dilemma of engineers and contractors trying to finish projects -- especially single -- and multifamily projects that are sorely needed.

"They're under pressure in market, but we don't want anything substandard," he said.

The utility's current project on Emma Avenue will utilize PVC pipe, so the project's conclusion can come more swiftly and the city can reopen Emma to traffic, Ward said.

"But we are moving ahead with our normal start date like supply issues won't delay the project," he said.

Inboden said the water delivery infrastructure should be completed end of 2025. At full build-out, it will have capability to pump 70 million gallons of water a day.

Local cities will tie to the pumping station to deliver water to the western reaches of Washington and Benton counties.