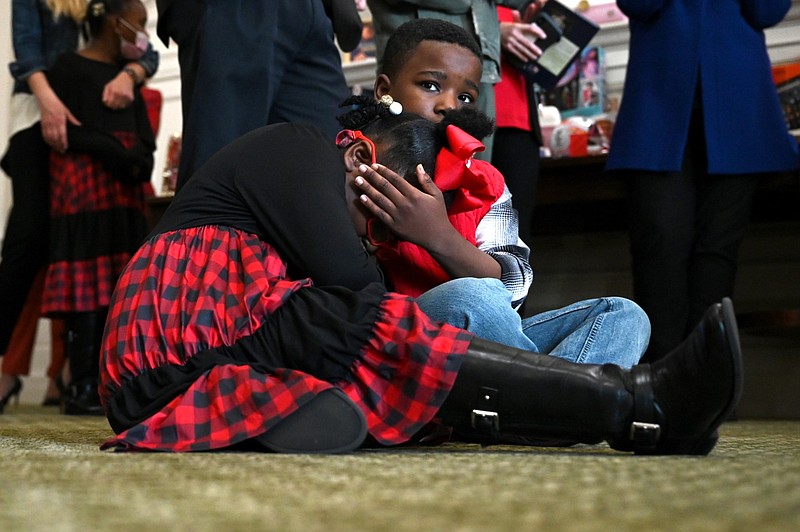 Antonia Johnson and Kenji Dabbs, then ages 7 and 10 respectively, snuggle on the floor of the Old Supreme Court room as they wait to open their presents during Christmas at the Capitol in this Dec. 6, 2021 file photo. The annual event helps children under the care of the Arkansas Division of Children and Family Services have a good Christmas with presents. (Arkansas Democrat-Gazette/Stephen Swofford)

While officials with the Division of Children and Family Services have made strides in correcting the damage done to the foster care system by the covid-19 pandemic, addressing staffing issues is an ongoing battle, according to a new report given state lawmakers.

When the covid-19 pandemic hit in early 2020, the number of children in foster care began rising, reaching more than 4,800 children in 2021, according to a Department of Human Services' Division of Children and Family Services report approved by legislators last week.

To address this situation, the Division of Children and Family Services implemented strategies targeted toward stabilizing and strengthening the workforce given what the agency knows about the impact of staff turnover on entries into and discharges from foster care, the report states.

• Implementing differential pay for staff members assigned to on call standby duty at a rate of 20% of their hourly rate while on-call.

The report was part of Act 574 of 2021 that required a study of best practices for reducing the number of children in foster care. The report's early findings were presented last week to the Senate Committee on Children and Youth and the House Committee on Aging, Children and Youth, Legislative and Military Affairs. A final report must be submitted to the Arkansas Legislative Council by Dec. 1.

The report that was given to legislators detailed a variety of strategies to reduce the number of children in foster care, but also recognized the challenges the pandemic put on the system.

"The coronavirus pandemic made every facet of the work that the Division of Children and Family Services conducts much more difficult, but staff and partners never lost focus on the end goal -- ensuring that every child in Arkansas has a safe and stable home every day," the report stated.

Mischa Martin, the director of the Division of Children and Family Services, told the Arkansas Democrat-Gazette on Friday that the increased number of children in foster care during the pandemic was not due to an increase in entries, but a delay in discharges due to services being shut down and staff turnover.

"You had things like court services, drug courts, substance abuse programs all being shut down during the pandemic," she said.

Martin also said the data released last week was actually almost a year old and that the agency had made some gains in addressing the fallout from the covid-19 pandemic. She said that in June of 2021 the number of children in foster care reached a record high of 4,898, but as of Friday morning the number had shrank to 4,290.

Martin said there isn't a specific number the agency is trying to reach, but officials want to ensure the system is functioning well for children.

"We don't want them lingering in our care," she said.

As a result of the changes made at the Department of Human Services at the time, the numbers began to decline, reaching the 4,200 to 4,400 range over those years.

However, the pandemic eventually stopped this trend by slowing the number of children being discharged from state care.

"The challenges of the public health emergency and the rising number of children in foster care, among other reasons, have also seemingly led to a higher degree of staff turnover and a corresponding increase in the average statewide Family Service Worker caseload," the report stated.

Martin said turnover of staff members has always been an issue at the Division of Children and Family Services due to the nature of their work.

"These are very stressful jobs," she said. "...When the pandemic hit and nobody was going out, our staff was still going into homes and assessing safety. That is a huge thing for our staff to do and that led to some turnover."

Martin said the amount of turnover the agency experienced during the pandemic has created a mostly new workforce.

"Turnover breeds turnover," she said. "We now have new staff and new supervisors."

Martin said the agency isn't where it needs to be just yet and that is mainly due to not having a stable workforce.

"That continues to be a challenge for us day to day," she said. "We have a 22% vacancy rate across the state and in some areas it's higher than the 22% average."

Despite staffing challenges the agency has been able to lower the number of children under their care back to an average of 4,200 by putting emphasis on finding a permanent home for children.

Martin said it's important to remember when it comes to foster care that there isn't a "one size fits all" solution for children.

"For some kids they need to be reunited with their families and for some children reunification doesn't work and we need to move to adoption," she said. "The main thing is we don't want someone linger in our care."

Martin said that is the reason why "permanency" has become a focus of the agency starting with the Every Day Counts initiative that was launched last year. The initiative focuses on getting children out of foster care by either reunifying them with their family or finding a home for them through adoption.

"Every day counts for a child in foster care," Martin said. "We don't believe children should be growing up under state custody."