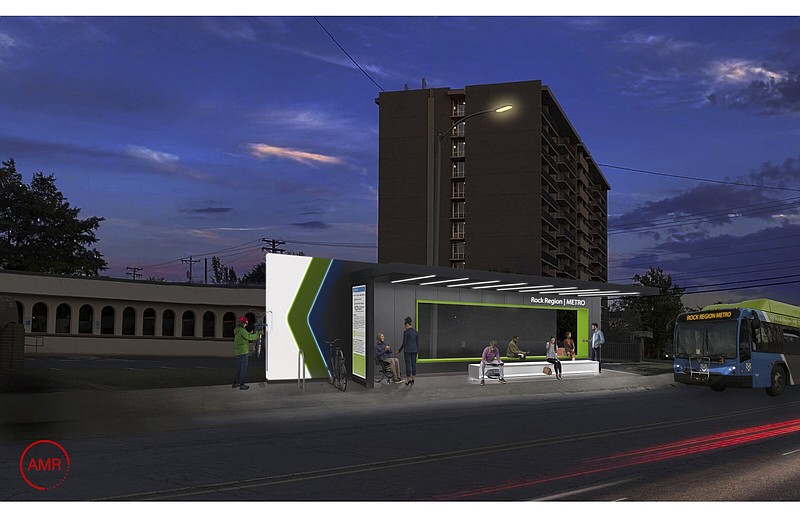 Rock Region Metro is planning to add three large covered areas known as "super shelters" to some bus stops to provide a safer and more comfortable area for riders.

Amenities will include video signage, lighting, USB charging ports, ventilation fans and radiant heaters, according to presentations made to the Rock Region Metropolitan Transit Authority board of directors.

"This is something we've been working on for quite a while," said Joe Procop, chief safety officer and special projects director for the transit agency, during a board meeting last week. "These shelters are going to have to be built in place and will be permanent so they'll have USB chargers, fans, heating and lighting."

The 2016 Move Central Arkansas Plan showed a need for additional shelters and passenger amenities on routes, Procop has said. Many of the public comments the agency had received addressed the need to provide shelter from the cold weather in winter and the heat and humidity of summer.

The next stage of the process is coming up in a matter of weeks. AMR Architects, on behalf of Rock Region Metro transit, will issue an invitation for bids seeking firms to construct the super shelters. A pre-bid meeting is scheduled for Jan. 4 and bids will be opened publicly on Jan. 17. A recommendation will be presented to the transit board at its January board meeting.

Kennadi Brooks, a student at Lisa Academy, said last week that she would definitely take advantage of the amenities of the new shelters along Midtown Avenue as she rides the bus to her classes.

Larayjah Gay, a warehouse worker for Custom Craft Poultry, also takes the bus at Midtown Avenue, heading to and from work.

She said the super shelters would provide her more ease in the cold winter months.

"This is a great location to implement them because there's a lot of homeless people on the streets and we're waiting a long time for busses and it's cold, so that'd be awesome," she said.

The transit agency and board hopes to start construction of the super shelters in mid-2023.