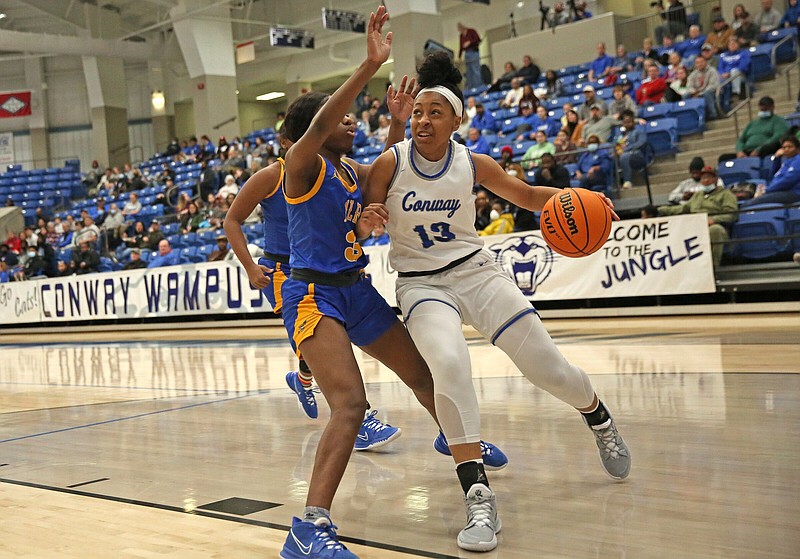 Chloe Clardy (13) drives toward the basket for Conway at home during a game against North Little Rock on Saturday, Feb. 26, 2022. (Arkansas Democrat-Gazette/Colin Murphey)

Edwards scored 12 of her points in the first half for the Lady Charging Wildcats (3-0), who ran out to a 31-28 lead by halftime and carried a 43-40 lead into the fourth quarter. Bartlett (4-1) threatened repeatedly over the final eight minutes until North Little Rock was able to seal it late.

Jocelyn Tate had eight of her 16 points in the final period, while Garin Freeman finished with 13 points, including a 6 of 6 effort from the foul line over the closing minutes. Ja'Miya Brown added 10 points for North Little Rock.

In the nightcap, Clardy's scoring explosion after halftime catapulted Conway (4-0) to a win over the Lady Panthers, led by ESPN's No. 2 player in the Class of 2023 Mikayla Williams, for the second year in a row. Emerie Bohanon scored 12 points, and Alexis Cox had nine of her 11 points in the second quarter for the Lady Wampus Cats. Samyah Jordan chipped in with eight points.

Last year, Conway pulled away for a 77-54 victory over Parkway after leading just 36-33 at the half. In the rematch, the Lady Wampus Cats were ahead 37-26 after two quarters. Clardy had 12 points in the third quarter to stake Conway to a 57-43 lead before a late push by the Lady Panthers allowed them to climb closer.

Williams, an LSU commit who had 24 points in the 2021 meeting, netted all 12 of her points in the second half for Parkway (2-1). Chloe Larry hit six three-pointers and led the Lady Panthers with 26 points. Makenna Miles scored 13 points, and Aniya Russell tallied eight points.

BEEBE 55, SEARCY 46 Zack Brewer's 30 points carried Beebe (2-2) into the Thanksgiving break with a victory over their White County rivals.

FOUNTAIN LAKE 50, DREW CENTRAL 34 Colby Lambert came through with 15 points for Fountain Lake (3-1), which led 25-14 at the half en route to winning its second game in a row. Evan East scored 13 points for the Cobras.

LAKE HAMILTON 72, LITTLE ROCK PARKVIEW 64 Ty Robinson scored a game-high 31 points as Class 5A No. 1 Lake Hamilton (3-0) beat Class 5A's No. 2-ranked team on the road. Charter Harris had 13 points and Zac Pennington knocked in 10 points for the Wolves, who led 34-23 at halftime and 51-45 after three quarters before holding on. LaBraun Christon also had nine points for Lake Hamilton. Nate Coley led Parkview (1-2) with 24 points. Scoop Howard and Carson Backus both countered with 13 points each.

RECTOR 80, PIGGOTT 74 Kameron Jones dropped in 39 points and pulled down 16 rebounds in a tough win for Rector (2-0). Cooper Rabjohn contributed 17 points for the Cougars.

WALDRON 62, CEDARVILLE 41 Ethan Mayberry scored 18 points in a victory for Waldron (5-0) during the Turkey Week Shootout in Mansfield. Trenton Hunt also had 18 points for the Bulldogs.