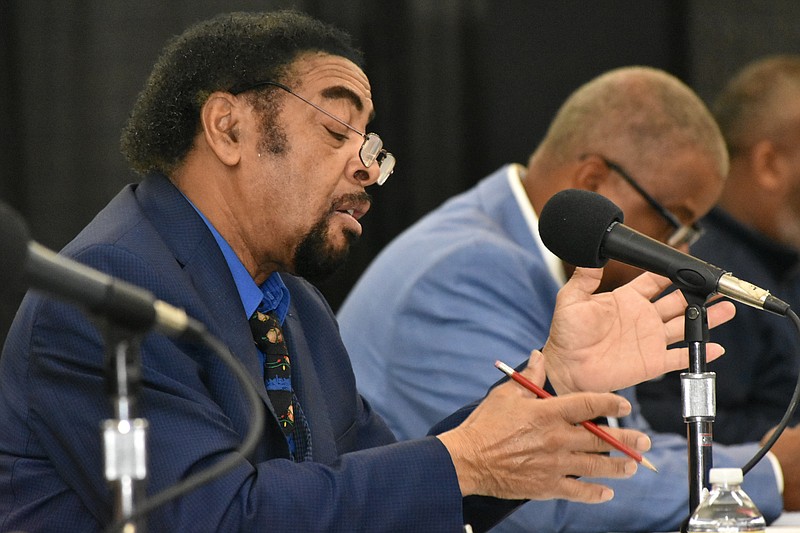 Pine Bluff City Council members approved a revision to a resolution that defines how $2 million appropriated for a new cultural district downtown would be sourced.

The council on Monday passed a Nov. 7 resolution to give $2 million to the city's Economic and Community Development Department for the development and construction of an initial site of the Delta Rhythm & Bayous Cultural District. The revision states that the funds are to be appropriated from the 5/8-cent general sales tax, better known as the Go Forward Pine Bluff tax that voters passed in 2017.

The council earlier this month supported designating that amount toward the district project, spearheaded by city tourism director Jimmy Cunningham Jr. Ward 3 Council Member Ivan Whitfield passed to his colleagues a copy of his proposed amendment to that resolution, which reads: "$2 million be taken from the upcoming 5/8-cent sales tax budget."

When Ward 1 Council Member Joni Alexander asked why the council was voting on a resolution that had already passed, City Attorney Althea Scott clarified that the funding source was inadvertently not added to the resolution language before it was signed by Mayor Shirley Washington.

The Civic Auditorium Complex Commission will receive at least $186,991 to cover the cost of the Convention Center's insurance after using the facility's ballroom for more than two years to conduct meetings and other events.

"The agreement was, in the past, the city has not been charged with city events," Washington said.

"When covid-19 came along, their expenses went up, we were using the building more often, and they have to bring in staff. They have to run heat, air, and their operating costs were going up as a result of us using it so much."

Washington said Convention Center Executive Director Joseph McCorvey notified her that the facility was running behind in its budget due to extra expenses.

"We would have paid over 200,000 [dollars] or so with all those meetings if we had taken care of tablecloths and everything we do if we had done it like a regular customer, so it's not like they're giving us anything," Washington said.

"We should be paying that because if operating costs are going up, we would have to offset that by paying insurance."

When the council took a roll-call vote on the resolution, Ward 3 councilman Glen Brown Sr. was the lone dissenter, saying "present" when his name was called.

"Why are we charging to live in our own house?" Brown said.

"I don't think we should have to pay for a building we call our own."

Washington announced the hiring of Leanita Hughes as group violence intervention director, a role she will take on by Jan. 31.

IN OTHER CITY BUSINESS ...

• The former fire station on Commerce Street has officially been leased to Debra Allen for operation of her First Ward Living Grace Food Pantry. The lease calls for no rent through December and an annual rent of $1 starting in January.

• Carson & Associates Inc. will renovate the city council chambers within the Detective Kevin D. Collins Center at the Civic Center for $277,000. Allison + Partners Inc. will convert one floor of the center into a police training and conference center for $18,120.

• The Economic and Community Development Department will acquire easements through the city's power of eminent domain through litigation for the development of the Grant Street Multi-Trail Project. The department may also negotiate a reasonable price with owners before or during litigation.

• A portion of city code pertaining to auxiliary police officers, whom the police department no longer uses, was repealed.

• Alexander requested that the balance of her $25,000 budget appropriation as council member be transferred to the Inspection Department to defer the costs of residential building permits for the rest of this year. The city will reallocate $16,261.40 to the department.