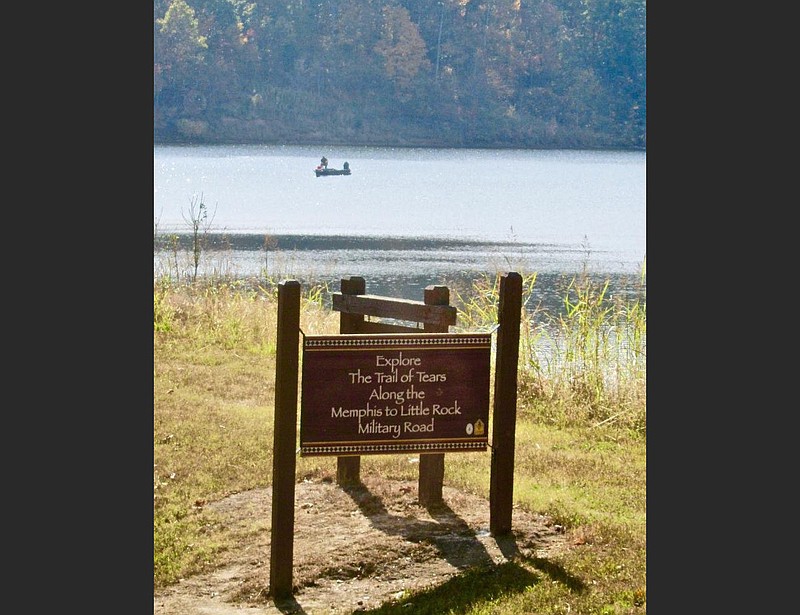 The Trail of Tears route along the old Military Road is marked in Village Creek State Park. (Special to the Democrat-Gazette/Marcia Schnedler)

VILLAGE CREEK STATE PARK — The tragic Trail of Tears weaves a spider web of routes across Arkansas, as marked by the many commemorative signs along hundreds of miles of highways across the state.

Arkansas witnessed the forced migration of all five Southeastern tribes that were herded west in the 1830s. Village Creek State Park, in Cross County 10 miles north of Forrest City, is a prime location marking this involuntary transfer. It contains the most intact segment of the route, denoted by signs along a lakeside trail.

Village Creek is one of five Arkansas state parks accredited by the National Park Service as a Trail of Tears National Historic Trail Site. Its visitor center features an enlightening exhibit on the removals in the decade after the U.S. Congress passed the Indian Removal Act of 1830. It is estimated that 60,000 members of the five tribes passed through what is now the Natural State.

An information panel outside the center, headlined "They Passed This Way," quotes a survivor's plaintive recollection: "Long time we travel on way to new lands. ... Womens cry. ... Children cry and men cry ... but they say nothing and just put heads down and keep on going towards west. Many days pass and people die very much."

Indoors, exhibits explain the trail's ties to the 7,000-acre park, which also provides an assortment of recreational facilities. Among them are a 27-hole golf course, an equestrian campground with stables, two lakes and 33 miles of multi-use trails. A counterpoint to those good-time activities is the Trail of Tears gallery.

Adding a personal touch are paintings that depict the challenges faced on this route by four of the tribes: Cherokee, Choctaw, Creek and Chickasaw. The fifth tribe, the Seminole, passed through Arkansas on other routes to Indian Territory (today's Oklahoma).

Several paintings by tribal members portray the hardships faced by the migrants. In "Unending Journey" by Valjean Hessing, a Choctaw mother and daughter are seen in the foreground hiking through ankle-deep snow. Hessing also painted "Jackson Says Go," which shows a white official reading to a huddled Choctaw group the eviction message from President Andrew Jackson.

A scattering of snow dots the ground in Tom Phillips' untitled portrait of Chickasaw families wrapped in blankets along their trail. In Dorothy Sullivan's "Cherokee Tears," a somber couple pauses to rest, with the woman holding an infant in her arms. Personalizing the mental and physical pain of the tribes gives the exhibit added impact.

Village Creek State Park's presentation is echoed by the Encyclopedia of Arkansas, which reports that "the movement of large groups of Indians through sparsely populated Arkansas incited fear and greed.

"For the most part, detachment leaders tried to keep the emigrants and the residents separated, and especially keep whiskey peddlers and gamblers out of the Indian encampments. Suppliers were often accused of price-gouging. Indians were accused of raiding corn fields and burning fence rails as firewood. Both groups accused the other of stealing horses."

The other state parks designated as Trail of Tears National Historic Trail Sites are Lake Dardanelle, Mount Nebo, Petit Jean and Pinnacle Mountain. The nonprofit Arkansas Trail of Tears Association (artota.org) aims to commemorate the involuntary transfers by land and water. Its work addresses the removal of the Cherokees and the other four displaced tribes.