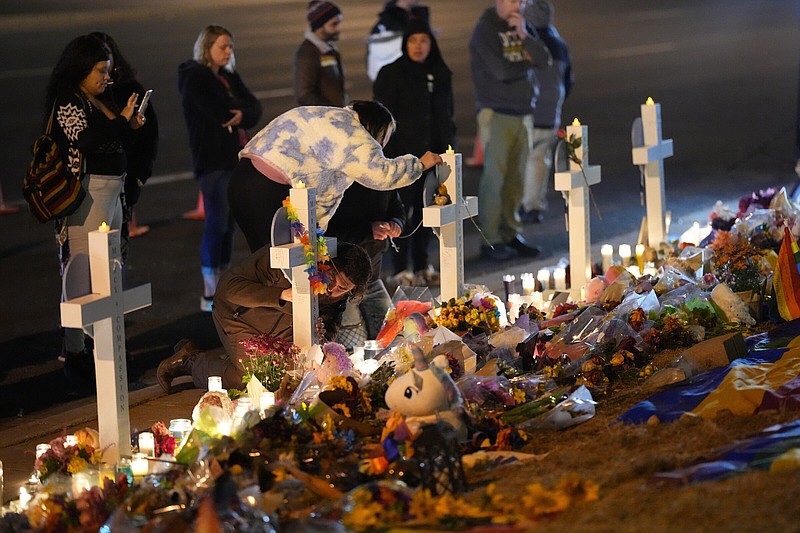 People sign the crosses of victims during a candlelight vigil on a corner near the site of a weekend mass shooting at a gay bar, late Monday, Nov. 21, 2022, in Colorado Springs, Colo. (AP Photo/Jack Dempsey)

An Army veteran described charging through the chaos, tackling the gunman accused of killing five people Saturday and injuring 18 others, and beating him bloody with the gunman's own gun at a gay bar in Colorado Springs. The suspect is facing murder and hate crime charges, according to online court records obtained Monday.

Officials on Monday clarified that 18 people were hurt in the attack, not 25 as they said originally. Among them was one person whose injury was not a gunshot wound. Another victim had no visible injuries, they said.

Richard Fierro said he was at a table in Club Q with his wife, daughter and friends Saturday watching a drag show when the sudden flash of gunfire ripped across the nightclub. His instincts from four combat deployments as an Army officer in Iraq and Afghanistan instantly kicked in, he said, and he told himself to fight back.

In an interview at his house, where his wife and daughter were still recovering from injuries, Fierro, 45, who left the Army in 2013 as a major, according to military records, described charging through the chaos at the club, tackling the gunman and beating him with the gunman's own gun.

"I don't know exactly what I did, I just went into combat mode," Fierro said, shaking his head. "I just know I have to kill this guy before he kills us."

Authorities are holding Anderson Lee Aldrich, 22, on charges related to the shooting. The death toll could have been much higher, officials said Sunday, if patrons of the bar had not stopped the gunman.

The charges against Aldrich were preliminary, and prosecutors had not filed them in court. The hate crime charges would require proving the gunman was motivated by bias, such as against the victims' actual or perceived sexual orientation or gender identity.

Local and federal authorities during a Monday news briefing declined to answer questions about why hate crime charges are being considered, citing the ongoing investigation. District Attorney Michael Allen noted that the murder charges would carry the harshest penalty -- life in prison -- whereas bias crimes are eligible for probation.

"But it is important to let the community know that we do not tolerate bias-motivated crimes in this community, that we support communities that have been maligned, harassed and intimidated and abused," Allen said. "And that's one way that we can do that, showing that we will put the money where our mouth is, essentially, and make sure that we try it that way."

"When police took him into custody," Mayor John Suthers said Monday morning, "there was an individual laying on top of him and had totally disabled him from perpetrating any further harm."

Fierro's description of what happened in those moments in Club Q closely matches accounts given by police and city officials and by the club's owners, who have reviewed security footage from the massacre. When they were shown a picture of Fierro on Monday, one club owner, Nic Grzecka, said he looked like the man who took down the gunman.

"I don't even know his name," Grzecka said. "I would really like to meet him."

When the shooting started, Fierro said, he hit the floor, pulling a friend down with him. As bullets sprayed, he saw the gunman move through the bar toward a door leading to a patio where dozens of bar patrons had fled. Fierro, who served in the Army for 15 years, said he raced across the room, grabbed the gunman by a handle on the back of his body armor, pulled him to the floor and jumped on top of him.

"Was he shooting at the time? Was he about to shoot? I don't know," Fierro said. "I just knew I had to take him down."

The gunman, who Fierro estimated weighed more than 300 pounds, sprawled onto the floor, his semi-automatic rifle landing just out of reach. Fierro started to go for the rifle, but then saw that the gunman had a pistol as well.

"I grabbed the gun out of his hand and just started hitting him in the head over and over," Fierro said.

As the fight continued, he said, he yelled for other club patrons to help him. A man grabbed the rifle and moved it away to safety. A drag dancer stomped on the gunman with their high heels. The whole time, Fierro said, he kept pummeling the shooter's head while the two men screamed obscenities at each other.

When police arrived a few minutes later, the gunman was no longer struggling, Fierro said, and he feared that he had killed him. The suspect in the shooting was taken into custody and remained hospitalized Monday afternoon.

Fierro said he was covered in blood when the police arrived, and officers tackled him and put him in handcuffs. He said he was held in a police car for more than an hour, and screamed and pleaded to be let go so he could see what had happened to his family.

Fierro, who owns a local brewery, said that on combat deployments in the Army, he had been shot at and had seen roadside bombs shred vehicle in his platoon. His record shows that he was awarded the Bronze Star twice. The experiences of combat still haunt him, he said, and the psychological and physical toll of the deployments were why he left the Army.

He said he never thought he would have to deal with that kind of violence at home.

Fierro injured his hands, knees and ankle while stopping the shooter, according to a Facebook post Monday by the brewery that Fierro operates with his wife.

"I'm OK. There are others who aren't," Fierro said. His daughter hurt her knee as she ran for cover, and her longtime boyfriend, Raymond Green Vance, 22, was killed.

Vance's family said in a statement that the Colorado Springs native was adored by his family and had recently gotten a job at FedEx, where he hoped to save enough money to get his own apartment.

The remaining victims were identified by authorities and family members as Ashley Paugh, 35, a mother who helped find homes for foster children; Daniel Aston, 28, who had worked at the club as a a bartender and entertainer; Kelly Loving, 40, whose sister described her as "caring and sweet"; and Derrick Rump, 38, another club bartender who was known for his quick wit and adopting his friends as his family.

Thomas James was identified by authorities as the other patron who intervened.

Before his wife handed him the phone, Suthers knew the call would be grim.

"Based on my life as a prosecutor and mayor, but primarily as a prosecutor, calls in the middle of the night are never good," Suthers said. "Every once in a while maybe a baby's born or something like that, but typically, they're never good."

Police are still investigating what type of weapons the suspect used, Suthers said, and he said only that one was a handgun and the other was a long rifle. Ballistic tests will be conducted to determine whether the rifle was automatic or semi-automatic, he said. He had heard that the suspect wore a vest but said that, too, must still be confirmed by police.

He said the shooting -- which took place at a gay club minutes before Sunday, the Transgender Day of Remembrance, began -- "has the trappings of a hate crime," given "where it occurred, how it occurred." He said Aldrich lives in Colorado Springs with his mother.

A man of the same name and age as Aldrich was arrested in Colorado Springs in June 2021 on multiple felony counts for allegedly making bomb threats to his mother. Local officials have thus far refused to comment on that case, which local media reports indicate was sealed without charges being filed.

Suthers said he was prohibited by Colorado law from commenting on it because it had been sealed. But he said the district attorney can unseal the records, and he said he expected the 4th Judicial District Attorney's Office to take that step.

The mayor said he'd spoken briefly with the co-owners of Club Q, which has been described as a hub of the LGBTQ community in Colorado Springs, and that he now finds himself in the same position so many other American mayors have found themselves in: rallying a city devastated by sudden, horrific violence.

"You just have to make sure and try and tell the world that the actions of one lone gunman, a 22-year-old male, don't reflect the feelings of a city of 500,000 people," he said, "and we can't let it define us."

The violence pierced the cozy confines of an entertainment venue long cherished as a safe spot for the LGBTQ community in the conservative-leaning city.

A makeshift memorial that sprang up in the hours after the attack continued to grow Monday, as a steady stream of mourners brought flowers and left messages in support of the LGBTQ community. The shooting site remained cordoned off.

"It's a reminder that love and acceptance still have a long way to go," Colorado Springs resident Mary Nikkel said at the site.

Any time "these tragedies happen, you just think 'When will it end and when will it stop?'" Biden said after the arrival of the official Christmas tree at the White House.

In 2015, three people were killed and eight wounded at a Planned Parenthood clinic in the city when a gunman targeted the clinic because it performed abortions.

Since 2006, there have been 523 mass killings and 2,727 deaths as of Nov. 19, according to The Associated Press/USA Today database on mass killings in the U.S.