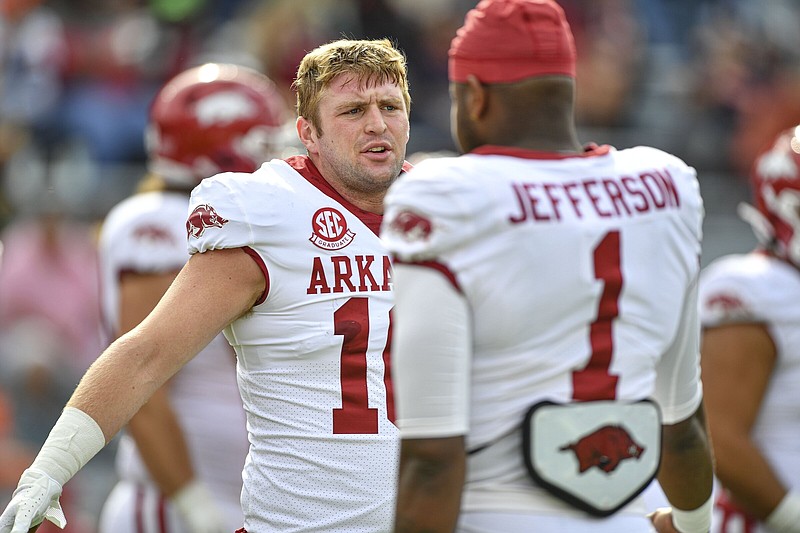 Arkansas linebacker Bumper Pool (10) and quarterback KJ Jefferson (1) warm up, Saturday, Oct. 29, 2022, prior to the Razorbacks’ 41-27 win over the Auburn Tigers at Jordan-Hare Stadium in Auburn, Ala. Visit nwaonline.com/221030Daily/ for today's photo gallery..(NWA Democrat-Gazette/Hank Layton)

FAYETTEVILLE -- University of Arkansas Coach Sam Pittman broadly hinted that linebacker Bumper Pool might have taken his final regular-season snaps as a Razorback at his weekly news conference on Monday. And Pool's status for the postseason also sounds in doubt after the Razorbacks wrap up their regular season at 2:30 p.m. Friday at Missouri.

Pool has been battling a hip injury all season, but the senior's ailments clearly extend beyond that.

"Well, I can give you a list," Pittman said when asked if Pool's problem was still a hip.

"Two hips, a back. He's beat up. And I'm telling you right now, about five weeks ago I thought he was done. We shut him down at practice and some things. He's beat up, man.

"But he's a trooper, and I don't know how much further he can go, to be honest with you. And I think with us getting bowl eligible, it could or could not be his last game. I don't know."

Pool, a Lucas, Texas, product who came back to play a fifth year as allowed by the NCAA due to the covid-19 season in 2020, has put himself in the UA record books.

He is now the school's all-time tackles leader with 441 career stops. Pool was also voted a team captain.

If Pool misses the Missouri game, he'll be the fourth and final captain elected by his teammates to miss time this season.

Safety Jalen Catalon has been out since the opener following reconstructive shoulder surgery. Quarterback KJ Jefferson has missed two games, one while in concussion protocol and the other with a shoulder injury. Right tackle Dalton Wagner missed the LSU game two weeks ago, along with Jefferson, due to a back problem.

Senior safety Simeon Blair was elevated to captain to fill in for Catalon starting in Week 2.

The Razorbacks worked on the practice fields outside the Walker Pavilion in spider pads on a cool day with temperatures approaching the mid 40s on Monday.

Senior linebacker Bumper Pool did not dress out for the practice but did attend.

Freshman running back James Jointer of Little Rock (Parkview) announced via Twitter on Monday that he would be entering the transfer portal.

Jointer, in a deep position group with Raheim Sanders, AJ Green, now-injured Dominique Johnson and fellow freshman Rashod Dubinion, had 3 carries for 9 yards while playing in one game.

Coach Sam Pittman said Jointer had not talked to him prior to making the decision.

Pittman said he expects a lot of player movement during exit interviews early next week.

The Razorbacks had huge representation among the SEC players of the week announced on Monday by the league office.

Drew Sanders had 10 tackles, his sixth double-figure tackling game of the year, and added a fumble recovery and interception in the Hogs' 42-27 win over Ole Miss.

Raheim Sanders ran for a career-high 232 yards and three touchdowns against the Rebels. He had five runs of 20-plus yards, including touchdowns of 20 and 68 yards, and became the third SEC player since 2000 to rush for 200 yards and have five or more receptions.

Stromberg, making his 43rd career start, allowed no sacks or pressures and had no penalties on 68 snaps while helping the Hogs to 503 total yards and a season-high 335 rushing yards.

Apparently Quincey McAdoo is already starting to suggest a role as a two-way player next season. The freshman has emerged at cornerback in 2 1/2 games.

The Clarendon native avoided giving up his first touchdown last week when Ole Miss was called for holding on a would-be 33-yard score.

McAdoo had a flash play as well, blowing up his blocker on a screen pass and making a tough tackle after a short gain by the Rebels. He was recruited as a receiver but has shown great ball skills as a defender as well.

"He keeps talking about it, about next year playing both," Coach Sam Pittman said. "The only reason you'd say no is because nobody else is doing it, you know what I mean?

"I don't know why you'd say no. ... You could see him having a role on third down on offense and things of that nature.

"But he hasn't decided what he wants to do. If he keeps playing like he is, I think he'll decide to stay where he is. But I know he wants to play wideout too."

Missouri slot receiver Barrett Banister, a sixth-year senior from Fayetteville with 36 receptions for 403 yards, is questionable for Friday after coming out of last Saturday's rout of New Mexico State in the fourth quarter.

"Mr. Third Down," Pittman said on Monday, referencing Banister's ability to make catches that result in first downs. "I love him.

"Man, I think he's a really good player. He's a great option runner, he can catch a fade ball. But the reason he's Mr. Third Down is because he can catch the football and he can get open. And I think he's had a heck of a career up there."

Banister went to Missouri as a walk-on and was placed on scholarship by Barry Odom, the Tigers' coach from 2016-19 and now Arkansas' defensive coordinator. He has 129 career catches for 1,215 yards and 2 touchdowns.

Banister had seven receptions for a team-high 91 yards in Saturday's 45-14 win over New Mexico State, but he left the game in the fourth quarter.

Reid Bauer and Max Fletcher both punted against LSU and Ole Miss.

Fletcher began the season as the No. 1 punter, then Bauer took over during the Mississippi State game.

"I think we've been inconsistent there this year," Sam Pittman said. "Fletcher is our sky kick guy. We had, seemed like, a lot of those Saturday.

Fletcher averaged 34.2 yards on four punts against Ole Miss, all of which were downed inside the 20. Bauer averaged 36.0 yards on two punts with a long of 43.

Pittman said Stein could be out against Missouri, and Oehrlein did a good job.

"We're fine in that category," he said.