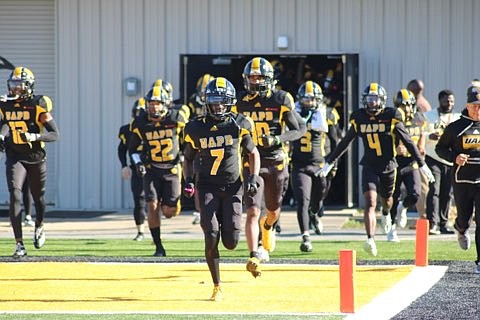 The UAPB football team will conclude the season Thursday against Alabama State University in the 98th Turkey Day Classic in Montgomery. (Special to The Commercial/Jamie Hooks)

At least for one more game, Don Treadwell will lead the University of Arkansas at Pine Bluff football team onto the field.

Treadwell said he hasn't talked with Athletic Director Chris Robinson about the future of the program, which will close the 2022 season as Alabama State University's Turkey Day Classic opponent on Thursday. Kickoff between the Hornets and Golden Lions is at 2 p.m. Thursday at ASU Stadium in Montgomery.

Treadwell is a candidate to replace the fired Doc Gamble in the full-time role, but he's 0-3 in the interim and the Golden Lions (2-8, 0-7 SWAC) are trying to end an eight-game slide, tied for the longest since losing 17 straight from 1985-86.

"We haven't dwelled on any of that, me personally or collectively," Treadwell said. "The whole focus, as you can imagine, is just really to be here to help our young men through this process and to help them one game at a time, one practice at a time. In order to do that, you don't want to shortchange them at all, so we just maintain the focus on our players, how we can continue to develop them, even behind the scenes."

An email was sent to Robinson asking about the coaching search.

Treadwell's approach during the past month has been striking a balance between not making wholesale changes to the Lions' system and making more subtle but immediate changes that may help them win again.

"There's that fine line where you don't want to disrupt that apple cart to a degree, because the kids have certainly been ingrained for a couple of years now in a certain system, especially offensively," Treadwell said. "You want to tweak something because you want to keep growing the team, and we've done a little bit of that each week, but we've kept the base of what they know and what they can execute because at the end of the day, that's what you're looking for, the production of them playing Saturday and confidently."

But Alabama State Coach Eddie Robinson Jr. said Tuskegee and ASU have not signed a contract for 2022, opening the door for the Golden Lions to be showcased on Thanksgiving. "We needed an opponent we could play, and it just kind of worked out with Pine Bluff that we could move this game, which would have been this past Saturday, to Turkey Day," Robinson said. UAPB played at Alabama State last year. Tuskegee will play ASU for the next three Turkey Day Classics, Robinson said.

Alabama State (6-4, 4-3) will finish the season with a winning record in Robinson's first year at the helm.

The Hornets nearly stunned Florida A&M in their last game Nov. 12 after winning the previous three outings, one of which was a rivalry win over Alabama A&M in the Magic City Classic in Birmingham.

The Hornets have been outscored 20.3-19.3 on average this season, and they've left their offense to a running back-by-committee and dual-quarterback system.

"We have three talented guys; all of them are a little bit different. ... The quarterback-by-committee was more or less due to injury to Dee Davis. He was the projected starter at the start of the year."

Defensively, the Hornets have shown an ability to adapt to different offensive schemes during the course of a game, Treadwell said.

Among the activities leading up to the Turkey Day Classic this year are a music festival featuring R&B acts Johnny Gill and After 7, and rapper Doug E. Fresh the night before the game. A parade will take over downtown Montgomery starting with pre-parade entertainment at 8:30 a.m. Thursday.

Thursday's game may lend itself to more of a homecoming atmosphere, something UAPB has faced under Treadwell in two of the past three games.

But don't expect a traditional Thanksgiving dinner to be the Lions' pregame meal. "Looking forward to it after might be a little better than before so we don't load up with too many carbs there, due to the fact we actually play on Thursday," Treadwell said.

WHO'S IN THE SWAC FINAL?

The logjam that is the Western Division of the SWAC has come down to one final game -- the Bayou Classic. Southern University can punch a ticket to the Dec. 3 title game at Eastern Division champion Jackson State (11-0, 8-0) with a win over Grambling State this Saturday in New Orleans.

A win will give Southern the head-to-head tiebreaker over Prairie View A&M, which failed to secure the division after losing to Mississippi Valley State 27-7.

Despite a 9-2 record, Florida A&M did not earn a berth in the NCAA Division I playoffs, a destination the Rattlers were awarded last season.

The Rattlers won the first national championship at that level in 1978.

Although the champions of the SWAC and Mid-Eastern Athletic Conference are tied to the Celebration Bowl (hence, the SWAC division champions wouldn't play in the NCAA tournament), the selection committee behind the playoffs could still choose a team from each conference to play in the 24-team national playoffs. FAMU moved up four spots to No. 20 in the top 25 coaches' poll and is one of 14 teams in the Football Championship Subdivision that have won nine or more games.