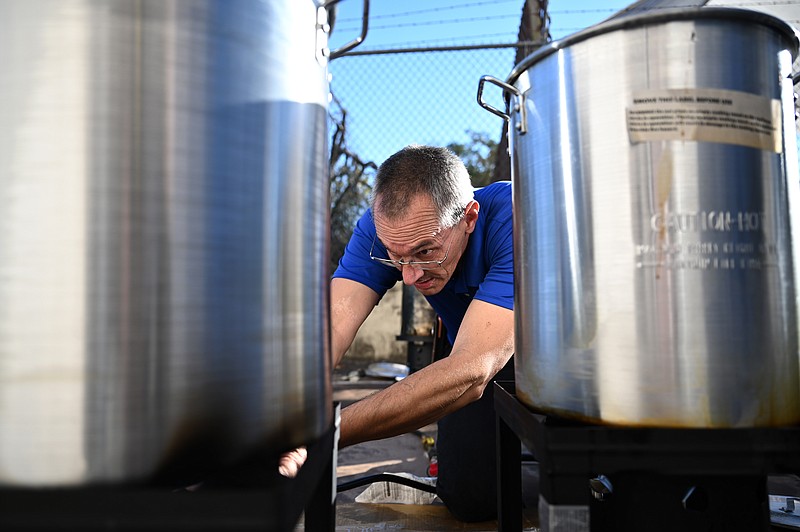 Kirk Phillips lights a fire under one of his pots as he cooks turkeys behind the Little Rock Compassion Center on Tuesday, Nov. 22, 2022. The Little Rock Compassion Center was looking at a difficult Thanksgiving week due to a shortfall of food donations. However, a really good weekend of donations got them the food they need. See more photos at arkansasonline.com/1123compassion/..(Arkansas Democrat-Gazette/Stephen Swofford)

As Arkansas food banks move into the season of giving, the organizations need more help than ever to keep those in the state fed.

Supply chain problems, coupled with continued hardships from the covid-19 pandemic on the state's population, has made the job of feeding those in need more difficult.

Riffle said the need matches numbers in the midst of the pandemic but there are no longer federal resources to help families and the food bank.

Pastor William Holloway, Little Rock Compassion Center director, said people have started traveling from outside the Little Rock metro area to get food from his center.

"We had two people in today from Ozark," Holloway said Monday. "We've had some from Conway, Texarkana and Hot Springs. People are being dropped off here."

Holloway said he's seeing more elderly and single mothers than he has in years past.

"I think we have to make some type of arrangement to get some of these people into nursing homes," Holloway said. "My social workers are becoming overworked."

Often single mothers are working but they don't have enough to make rent and buy groceries, he said.

Supply chain issues and inflation has made it difficult to keep the shelves stocked as demand goes up, Holloway said.

"We will get this and that but not everything at one time," Holloway said.

"There for awhile we were wondering if we would have enough turkeys, but because people care so much, we were able to get enough. We won't be able to do as much as we did in past years but we should be pretty good."

Holloway has spent recent days frying 120 turkeys, with the expectation of feeding about 800 people during Thanksgiving meals provided by the center through the holiday weekend.

"You have a full truckload two days late and only half the food you thought you were receiving is on it," Riffle said.

"There is a trickle-down effect. It is a shortage to us and then our pantries and the people we are serving."

The food bank supplies food to partner agencies in 33 counties in Arkansas.

Typically, the food bank has received donations from retailers such as grocery stores.

"They are donating food from stores for a lot of reasons," Riffle said. "Maybe they ordered too much and they are worried it won't sell before the expiration date or they have dented food."

Supply shortages are also affecting grocery stores, which is limiting donations, she said.

"We get stuck in a hard place," Riffle said. "If we aren't getting peanut butter and mac and cheese donated then we need to purchase those, but there might also be a grocery store trying to purchase the same truckloads. We are competing directly with retailers, and a retailer comes in and overbids. We can't continue to up the price."

Riffle said the food bank has become more creative in looking for sources of food. This includes purchasing produce from neighboring states, during off-seasons in Arkansas.

"Then you are paying for freight to transport across a couple of states," Riffle said. "Freight is at a height. It is costing us more money but we are able to access more products."

It is incredible that the bank has continually been able to supply food during the rises in prices and need, Riffle said.

"It is such a testament to our staff and our partners who are so determined to take care of people in our community," she said. "It is pretty amazing that we are able to give back to people who need it."

The last six weeks of the year is when the food bank receives a majority of its donations that fund the following year, she said.

While larger donations help the cause, a majority comes from the abundance of smaller $5 to $10 donations that come from across the state and nation.

"We have donors in half the states in the United States," Riffle said. "It is not because they have family here but because they've seen the need is high in the state."

The Arkansas Community Foundation reports that the state ranks 50th out of 51 states for food insecurity in 2019, according to its website.

Feeding America says a 2020 study found 1 in 5 children in the state face hunger and 1 in 7 people, according to its website.