He urges Americans to get covid shots by Compiled by Democrat-Gazette Staff From Wire Reports | November 23, 2022 at 4:53 a.m. 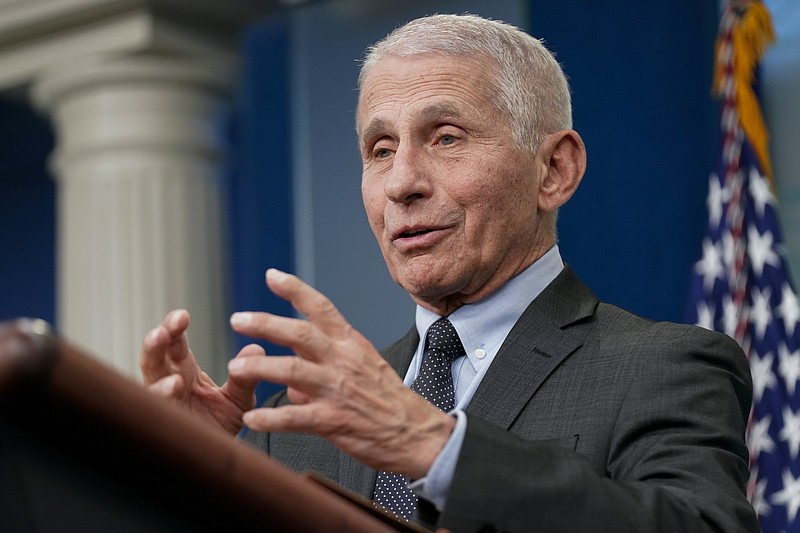 Dr. Anthony Fauci, Director of the National Institute of Allergy and Infectious Diseases, speaks during a press briefing at the White House, Tuesday, Nov. 22, 2022, in Washington. (AP Photo/Patrick Semansky)

Dr. Anthony Fauci, the nation's leading infectious-disease expert, who has served under seven presidents, used his farewell Tuesday at the White House podium to urge Americans to get updated coronavirus booster shots.

Fauci, 81, has announced he will leave government service next month, stepping down as President Biden's top medical adviser and director of the National Institute of Allergy and Infectious Diseases, which he has led for 38 years.

Fauci appeared in the briefing room alongside White House press secretary Karine Jean-Pierre and Ashish Jha, the White House covid-19 response coordinator, as the Biden administration kicked off a six-week campaign to encourage Americans to get the updated shots.

"My message and my final message -- maybe the final message I give you from this podium -- is that please, for your own safety, for that of your family, get your updated covid-19 shot as soon as you're eligible to protect yourself, your family and your community," he said.

Fauci became the face of the coronavirus pandemic response, drawing widespread praise and harsh criticism while he and his family received death threats.

Some Republicans, most notably Sen. Rand Paul, R-Ky., have called for Fauci's firing, questioning the science behind vaccines, masks and other public health measures, claiming Fauci had a role in the origin of the coronavirus.

Jean-Pierre and Jha offered kind words for Fauci, who was reflective in answering reporters' questions about the toll of the pandemic, which has claimed the lives of more than 6.6 million people worldwide, including about 1.1 million confirmed deaths in the United States.

At one point, Fauci acknowledged how those who wear masks are often singled out, joking with a reporter: "I mean, you're absolutely right. I mean, I know sometimes when you walk in and you have a mask and nobody has a mask, you kind of feel guilty. You shouldn't feel guilty. You look terrific, right?"

Fauci took over the little-known National Institute of Allergy and Infectious Diseases in 1984 after joining the parent agency, the National Institutes of Health, as a 27-year-old doctor just out of a medical residency.

Viewed as a rising star when he joined the agency in 1968, Fauci ultimately advised seven presidents and ended up being on the front lines of every major health event since then, including AIDS, Ebola and the 2001 anthrax scares. During that time, the institute grew from having a $350 million annual budget to its current budget exceeding $6 billion.

Fauci was well-known and widely cited in the scientific community before the coronavirus pandemic made him the target of Republican lawmakers and media figures. During the earliest days of the AIDS epidemic, it was activists who frequently criticized the government for its slow response to the deaths of many members of the LGBTQ community.

In the era of social media and 24-hour news, criticism -- and conspiracy theories -- aimed at Fauci and the government were multiplied.

Missteps in the earliest days of the pandemic, such as failing to recognize that asymptomatic people were prime spreaders of the virus and dismissing the necessity of masks, seriously hurt his credibility with some people, including former President Donald Trump, who questioned Fauci's expertise toward the end of his term.

"When you're dealing with an evolving outbreak with the information, you get changes from week to week and month to month," Fauci said. "We've got to probably do a better job of when we talk to the public, explaining that this is a dynamic situation that could change."

"The only thing people heard when they throw it back at you is, 'Well, you said we don't have to worry about anything,' so you just got to make sure you always underscore the dynamic nature of what you're dealing with," Fauci added.

Several Republicans -- including some in the GOP-controlled House -- have pledged to investigate Fauci's handling of the pandemic in the next Congress. Fauci said Tuesday that he will cooperate with the potential requests of lawmakers.

"If there are oversight hearings, I absolutely will cooperate and testify before the Congress," he said. "Obviously, you may not know, but I testified before the Congress a few hundred times over the last 40 years or so. So I have no trouble testifying. We can defend and explain and stand by everything that we've said. So I have nothing to hide."

Fauci previously told The Post that he is not exiting the public square but hopes to teach, lecture and write while inspiring and teaching a younger generation of scientists. He initially planned to retire at the end of Trump's presidency but remained in place when Biden asked him to join his administration.

Fauci spoke with pride and a sense of accomplishment about his more than two years overseeing the White House's response to the pandemic.

"What I would like people to remember about what I've done is that every day for all of those years, I've given it everything I have and I've never left anything on the field," he said Tuesday.

In Missouri, state Attorney General Eric Schmitt will depose Fauci today as part of an ongoing lawsuit that accuses the Biden administration of coordinating with social media companies to stifle free speech.

The deposition is part of a May lawsuit filed by Schmitt, who was elected to the U.S. Senate earlier this month, and Louisiana Attorney General Jeff Landry that attempts to show that the Biden administration violated the First Amendment by working with social media companies to limit speech, particularly around covid-19 and elections.

"Since we filed our landmark lawsuit, we have uncovered documents and discovery that show clear coordination between the Biden Administration and social media companies on censoring speech, but we're not done yet. We plan to get answers on behalf of the American people. Stay tuned," he said.

Schmitt spent much of 2022 suing school districts in Missouri over their plans to limit the spread of covid-19 in public schools.

While campaigning, Schmitt often said the goal of his job as attorney general was to wake up, go to the office and sue Biden.

Republicans like Schmitt have been critical of efforts by the Biden administration and social media companies to prevent disinformation about covid-19 vaccines.

The National Institute of Allergy and Infectious Diseases stated that it does not comment on litigation or pending litigation.

Information for this article was contributed by Eugene Scott and Yasmeen Abutaleb of The Washington Post and by Daniel Desrochers of The Kansas City Star (TNS).