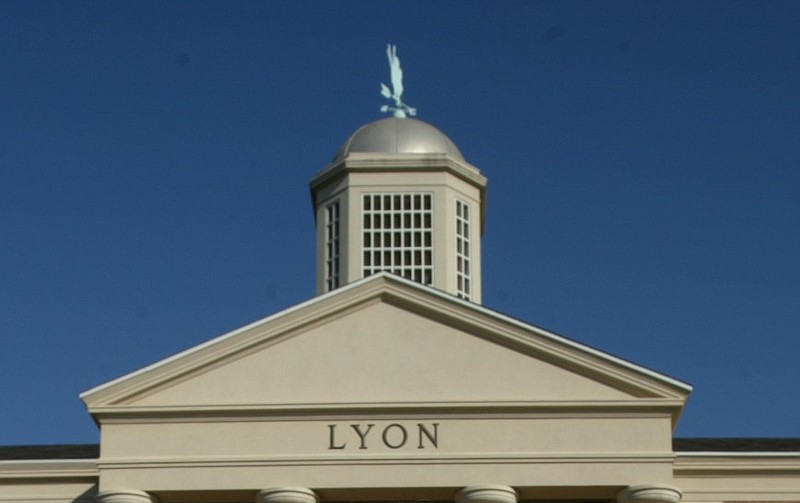 The Lyon Building on the Lyon College campus in Batesville is shown in this December 2005 file photo. (Arkansas Democrat-Gazette/Staton Breidenthal)

Doctor of Medical Dentistry and Doctor of Veterinary Medicine professional degrees from Lyon College, as well as a branch campus in Little Rock to house the dentistry and veterinary medicine programs, have been approved by the Higher Learning Commission Institutional Actions Council.

This sets the stage for the college to complete and submit initial applications for professional accreditation to the Commission on Dental Accreditation of the American Dental Association and the Council on Education of the American Veterinary Medical Association, according to Melissa P. Taverner, Lyon College president. She said the college plans to submit those applications in early 2023.

"Achieving the approval of our regional accreditor for these schools is a major milestone for us," Taverner said in a news release.

The college's goal is for students in the dentistry and veterinary programs to begin classes in 2024 or 2025.

Lyon College will collaborate with the University of Arkansas for Medical Sciences on the state's first dental school, joining forces where practicable and identifying opportunities for joint teaching, research, graduate education and professional development that benefit students and faculty, under a memorandum of understanding announced earlier this month.

The veterinary school will also likely be the state's first, and both the dental and veterinary programs will be included in Lyon College's Institute of Health Sciences.

Arkansas is one of only 14 states that do not have a dental school or college, according to listings from the Commission on Dental Accreditation.

In May, officials announced that OneHealth Education Group, a partner in the Institute of Health Sciences endeavor with Lyon College, would purchase downtown Little Rock's Heifer International campus to house the veterinary and dental schools. Heifer opened the $17 million campus in 2006, and Heifer International will remain on the campus, leasing space from OneHealth.

The state also fares poorly in dental health, ranking near the bottom for states. Arkansas had just 41.82 dentists per 100,000 people in 2019, ranked ahead only of Alabama, according to the national Library of Medicine.

Lyon College, a private, liberal arts institution founded in 1872, dropped from 581 students last fall to 495 this September, although new student enrollment increased 12%. The college continues to add programs in an effort to attract students and to provide qualified employees for professions with worker shortages, according to Carol Langston, director of college communications.

For example, in addition to the dental and veterinary colleges that aim to address the state's paucity of dentists and veterinarians, Lyon College plans to offer a Bachelor of Science in Nursing program. Lyon College also plans to have a Master of Arts in Teaching program next year.

Nurses and teachers are in demand locally and nationally.

The Bachelor of Science in Nursing and Master of Arts in Teaching -- as well as distance education courses and programs, and a change in mission to offer graduate degrees -- were all approved Friday by the Higher Learning Commission Institutional Actions Council. Lyon College announced the approval Tuesday.

"We are now able to advertise these new programs that will be located at our Batesville campus and to proceed with the next stages of development, including preparing instructional plans and finalizing admissions processes for the BSN and MAT programs," Taverner said in the news release.

The bachelor's in nursing program -- designed for graduates of registered nursing programs at Arkansas community colleges and nursing school graduates who have a diploma or associate's degree in nursing, have earned their state license and seek to advance in their careers by earning the bachelor's degree -- was developed in partnership with White River Health of Batesville and the University of Arkansas Community College at Batesville, according to Lyon College.

The master's in teaching program, on the other hand, "is designed especially for individuals without teaching credentials who have earned baccalaureate degrees in content areas and want to become teachers in an expedited fashion," according to the college's announcement on Tuesday.

"It is wonderfully exciting to see Lyon College add its first new degrees in many decades," Provost Kurt Grafton said in the news release from the college. "It speaks to the spirit of innovation and hard work that our faculty and staff bring to the campus every day as we make the Lyon experience ever more relevant and impactful. I am personally very much looking forward to watching these programs expand and produce graduates who will make lasting positive impacts on their communities and in the state of Arkansas for many years to come."