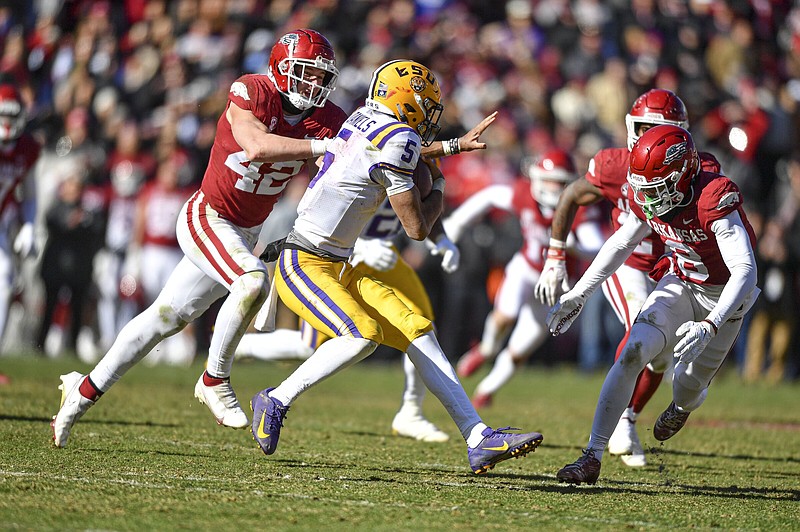 FAYETTEVILLE -- Drew Sanders made his transfer move to Arkansas pay off big time in 2022.

The junior from Denton, Texas, was named a finalist on Monday for the Butkus Award, which has been given annually to the nation's top linebacker since 1985.

Sanders, who transferred from Alabama to Arkansas to play a more traditional linebacker role rather than the edge position he was in with the Crimson Tide, leads the SEC and is tied for 13th nationally with 8.5 sacks.

He was named a mid-season All-American by The Associated Press, CBS Sports, ESPN, The Sporting News and The Athletic in October after earning the Butkus Award's national linebacker of the month in September.

Sanders, a 6-5, 233-pounder, leads Arkansas with 96 tackles, 59 solo tackles, 12.5 tackles for 45 lost yards, 6 quarterback hurries and 3 forced fumbles. He also has a fumble recovery, three pass breakups and an interception.

Sanders is the first Razorback since Alonzo Highsmith in 2011 with 12.5 tackles for loss. Sanders and former Buffalo linebacker Khalil Mack are the only FBS players with 95-plus tackles, 12 tackles for loss, 8 sacks, 3 forced fumbles, a fumble recovery and an interception in the same season.

In last week's 42-27 win over No. 14 Ole Miss, Sanders recovered a first-quarter fumble and notched his first college interception in the second quarter. That takeaway late in the half led to an 8-yard Raheim Sanders' touchdown run with 5 seconds left in the second quarter for a 35-6 Arkansas lead.

The Butkus Award winner will be named on or before Dec. 7 and that player will be feted on Jan. 21 at the Agua Client Resort Casino and Spa in Rancho Mirage, Calif.

Arkansas quarterback KJ Jefferson isn't ready to start talking about where he'll be playing in 2023.

Asked on a video conference on Tuesday night if he'd thought about his plans for next season, Jefferson replied, "I haven't given any thought to it just yet. I'm worried about Missouri and going out and making sure we get that win and keeping that trophy here.

"So I'm not worried about the future. I'm in the present right now."

Jefferson is draft eligible as a redshirt junior, though he also has two more seasons of potential eligibility since he would have a bonus year available due to the covid-19 season.

Pool, the UA's all-time tackle leader with 441 stops, did not practice on Monday, and is considered questionable. Pittman suggested Pool might have played his last game in Saturday's 42-27 rout of No. 14 Ole Miss.

"I think Sam's just throwing out rat poisoning," Drinkwitz said regarding reports that Pool was doubtful for Friday. "I think Bumper Pool is a tough young man and plays his guts out. I would be shocked if he didn't find a way to play in a rivalry game."

Redshirt freshman Chris Paul would get the call at linebacker, with true freshman Jordan Crook moving up in the rotation, beside junior Drew Sanders if Pool is not available.

Coach Sam Pittman said safety Jalen Catalon is planning to make an announcement regarding his plans for 2023 in the near future, but he didn't want to steal Catalon's thunder.

Catalon, a preseason All-American who was lost for the year in the season opener due to reconstructive shoulder surgery, was on the Arkansas sideline last week. Pittman wanted the Mansfield, Texas, product to have some time away from the program to deal with his second season-ending injury in a row.

"We're in a really good place with Jalen," Pittman said on Monday. "He's been away for a while. He had those two injuries.

"I told him to just take some time off, get healed, do all those things. So, I've obviously had the conversation with him, and I'll let him tell y'all when he's ready to tell y'all what his decision is going to be, whether he comes back or declares for the league."

Another week has yielded new bowl projections for the Razorbacks, who notched their sixth win for bowl eligibility by thumping Ole Miss last week.

SI.com projects the Razorbacks to face Texas in the Texas Bowl, which would be a rematch of the 2014 Texas Bowl, won 31-7 by Arkansas.

Athlon Sports predicts an Arkansas-Oklahoma matchup in the Texas Bowl, which will be played Dec. 28.

Yahoo! Sports projects an Arkansas vs. Miami matchup in the Gasparilla Bowl. That game will be played on Dec. 23 in Raymond James Stadium, the site of the Razorbacks' 24-10 win over Penn State in the Outback Bowl on Jan. 1.

Ole Miss outscored the Razorbacks 21-0 in the fourth quarter last week, but it was only a small cause for concern by Coach Sam Pittman, as the Razorbacks held a 42-6 lead prior to that and were clearly running clock.

Pittman said he told offensive coordinator Kendal Briles to run the play clock down after the Razorbacks jumped to a 36-point lead, shrinking the game clock on the Rebels but also taking Arkansas out of its preferred uptempo style.

"I told KB, 'You can do whatever you want to do, but let's not snap it until it gets down.'" Pittman said. "It can be an excuse if you want to, because you go, 'Well, we're firing at 'em. We're going fast.'

On the other side of the ball, Ole Miss rushed for 186 yards among its 216 total yards in the fourth quarter, pumping its totals to an eye-popping 463 rushing yards and 703 total yards.

"Defensively, I think we went into -- we played a pretty good third quarter -- and then I think we went into, 'They can't beat us unless we give up a big long pass.'" Pittman said. "And they said, 'Well, we can, we'll just turn around and hand it off and run it on you.'

"I think that might've been a miscalculation on what we thought, that they were just going to air it out on us. To be perfectly honest with you, there was no way they could've won the game as long as we took the clock off."

Pittman said the aim was to not have quick three-and-out possessions on offense so as not to fuel the high-tempo Ole Miss attack.

"You wouldn't do that against every team, because every team doesn't have the ability to come back," he said. "Ole Miss did. We probably went a little too conservative defensively."