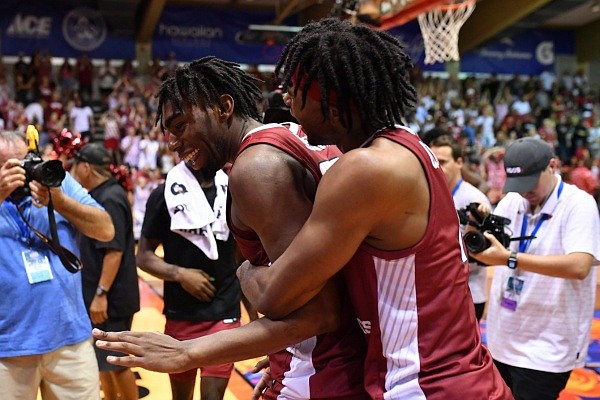 Arkansas concluded the Maui Invitational with another comeback bid Wednesday.

This time, the ninth-ranked Razorbacks completed it.

One night after they fell short against No. 10 Creighton, Arkansas defeated 17th-ranked San Diego State 78-74 in overtime in the third-place game. The Razorbacks (5-1) finished their three-game stay in Lahaina, Hawaii, with a 2-1 record.

Arkansas forward Kamani Johnson tied the game as time expired in regulation. His putback followed a miss by Anthony Black and tied the game 67-67, ending an arduous rally from an 11-point second-half deficit.

Black made two free throws with 13 seconds remaining to pull Arkansas to within 67-65. He and Trevon Brazile double teamed Lamont Butler on the ensuing throw-in, and Brazile deflected the ball and dove onto the floor to give the Razorbacks possession with 7.5 seconds remaining and set up the last-second heroics.

Black's runner went off the back of the rim, but into the hands of Johnson, who let go of the ball on his way to the floor with the game clock inside of one second.

Johnson finished with 7 points and 7 rebounds in 19 minutes off the bench. He entered the game with less than 15 minutes remaining in regulation and only came off the floor in offense-for-defense substitutions in the final minute.

Johnson did not play in the Razorbacks’ first two games at the Maui Invitational. He entered the San Diego State game averaging 0.7 points and 1.7 rebounds.

"We thought somebody off the bench that maybe hadn't played last night could have an impact," Arkansas coach Eric Musselman said, "and obviously Kamani Johnson was absolutely incredible the last 19 minutes of the game."

Johnson contributed more big plays in overtime, including another second-chance basket. His two free throws gave the Razorbacks a 78-74 lead with 3.7 seconds remaining.

Johnson contested a layup attempt by Matt Bradley with about five seconds to play and came away with the rebound to set up his free throws. He stole the ensuing inbounds pass to seal the victory.

"It was just a team effort out there," Johnson said on the Razorback Sports Network's post-game radio show. "I love how we fought, and that’s just going to help us in March. That’s one of those gut wins, you know what I mean?"

Arkansas responded with an 8-0 run that tied the game. Ricky Council made a shot as he was fouled and completed the three-point play to start the run, and Brazile added a three-pointer from the top of the key to cut the Aztecs' lead to 61-59 with 4:36 to play.

The Razorbacks had opportunities, but never took the lead in the second half. Brazile and Council each made 1 of 2 free throws before Darrion Trammell's step-back jumper put the Aztecs ahead 63-61 with 2:32 remaining in regulation.

Black's two free throws with 1:26 remaining tied the game again, but Bradley made a reverse layup with his left hand to give San Diego State a 65-63 advantage with 1:02 remaining.

Arkansas followed with a shot clock violation and Adam Seiko made two free throws to grow the Aztecs' lead to 67-63 with 17 seconds to go.

San Diego State guard Lamont Butler inexplicably fouled Black with 13 seconds remaining, leading to his two free throws. Butler, 6-2, was trapped by the 6-7 Black and 6-10 Brazile on the inbounds play and committed the turnover that led to Johnson's game-tying shot.

"I didn't know that the guy was going to give it up that easy," said Brazile, who led the Razorbacks with 20 points. "He's a senior guard. Those guys are old. He lost the ball, (I) dove on it, timeout as soon as I got it."

Brazile said he was surprised Butler did not call timeout.

Arkansas looked energized in overtime. Council scored four quick points and the Razorbacks finished the extra period 4 of 9 from the field and 3 of 4 at the free-throw line.

Council scored five points in the overtime period to cap a 19-point game. He had one point at halftime and Musselman said he nearly took him out of the game in the second half.

"He said, ‘Just give me another opportunity, Coach. I’m still here. My legs are OK,'" Musselman told RSN. "He and Anthony were phenomenal in the pick-and-rolls."

After a back-and-forth start, San Diego State used a 15-1 run in the first half to go ahead 29-16. At one point in the half, the Razorbacks went almost seven minutes without making a shot, and their only five points during that span came at the line.

San Diego State led 35-26 at halftime, but Arkansas started the second half strong and pulled to within 37-34 on Brazile's three-pointer with 16:01 to play in the second half.

"San Diego State's coaching staff, I thought, did an incredible job today. They controlled the game for most of the game," Musselman said. "We did just enough to hang around. It's not often that a game kind of has an NBA feel how it ended, but that's how a lot of NBA games kind of end.

"You just keep talking to your team about hang around, hang around. Eventually you try to get two or three stops in a row."

Bradley led the Aztecs with 23 points and Trammell added 13. San Diego State shot 27 of 68 from the floor, and just 2 of 18 from beyond the arc.

"Obviously, we wish we would have closed better," San Diego State coach Brian Dutcher said. "We didn't. It ended up going to overtime, and we still had opportunities in overtime."