No Maui mystique: Razorbacks lose tight one to Bluejays 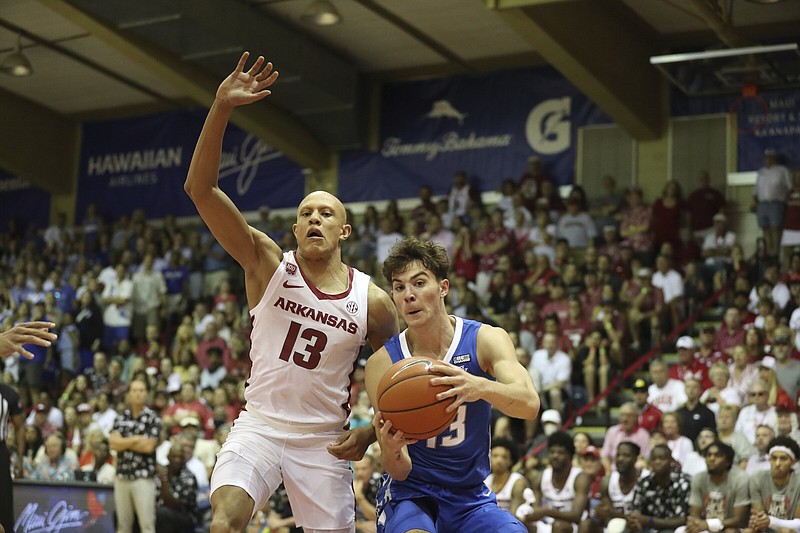 University of Arkansas Coach Eric Musselman was in no mood to be diplomatic after No. 10 Creighton held on to beat the No. 9 Razorbacks 90-87 Tuesday night in the semifinals of the Maui Invitational in the Lahaina (Hawaii) Civic Center.

After the Bluejays (6-0) hit their lone free throw attempt of the first half, they hit 20 of 28 in the second half.

Musselman, speaking briefly on Arkansas' postgame radio show immediately after the game, was highly critical of the officiating.

"A lot of games, a lot of years. I've never seen anything like it."

Musselman didn't specify which foul call he was so upset about, but two of Creighton's made free throws were by Ryan Nembhard with 13:57 left in the second half after a technical foul was called on someone on Arkansas' bench.

It wasn't clear who drew the technical, but Musselman reacted with shock.

Musselman and sophomore guard Anthony Black -- who led the Razorbacks with 26 points, 6 rebounds and 6 assists -- also were upset about the officials not calling a foul after Black made a three-pointer over Creighton guard Trey Alexander with three seconds left to pull Arkansas within 88-87.

On television replays it appeared Alexander made contact with Black's arm as he was shooting.

Another costly call for Arkansas was with 29 seconds left after Black hit a free throw to cut the Bluejays' lead to 85-82. Black also made the second free throw, but it was negated because Jordan Walsh was called for a lane violation.

Baylor Scheierman hit two free throws for the Bluejays to make it 87-84, then after Ricky Council missed a three-point attempt for Arkansas, Nembhard hit 1 of 2 free throws for an 88-84 margin.

Black then missed a half-court attempt at the buzzer.

"It was just an incredible college basketball game. There were a lot of haymakers thrown out there in 40 minutes," Bluejays Coach Greg McDermott said in a postgame news conference. "Their poise for as young as they are is really incredible.

"We didn't go very deep on the bench tonight ... I felt like we kind of had to ride these guys and they did a great job.

"Some execution down the stretch to get Kalkbrenner some touches for some easy baskets, and then we executed at least the last play defensively the way we wanted.

"But that [Arkansas] team is winning a lot of games. I would like to think we're going to win a lot of games. They just kind of ran out of time. It was just an awesome basketball game against a very, very good opponent."

The Razorbacks will play in the Maui Invitational's third-place game at 9 tonight on ESPN 2 against the loser of Tuesday night's late game between No. 14 Arizona and No. 17 San Diego State.

Arkansas again played without freshman guard Nick Smith, a preseason first team All-SEC pick by the coaches and media, who has missed every game this season as he recovers from a right knee injury.

Council, a junior guard, had 24 points, 3 rebounds and 3 assists.

Razorbacks sophomore forward Trevon Brazile scored all 17 of his points in the second half before he fouled out with seven seconds left.

"We couldn't play any harder than what we played," Musselman said. "Creighton is a great basketball team. I don't know what else to say."

Black, who also scored 26 points in Arkansas' 80-54 victory over Louisville on Monday, hit 10 of 18 shots against Creighton.

"Anthony has been unbelievable," Musselman said. "We went to a middle pick-and-roll and got a lot of good looks to score 53 points in the second half, but you can't overcome what we saw."

Kalkbrenner, a 7-1 junior, had 21 points, 7 rebounds and 2 blocked shots. Scheierman, a senior transfer from South Dakota State, had 20 points.

"They're a great team," Nembhard said in a postgame news conference of the Razorbacks. "They got a lot of length.

"They're big. They've got a lot of size. They play really hard. They're just a good young team. It was a great matchup."

After Creighton took its largest lead of the game, 40-28, with 1:43 left in the first half on Alexander's driving basket, the Razorbacks scored the last six points of the half.

Black scored on a driving basket, then after a Creighton miss, Mahkel Mitchell scored on a rebound.

Mitchell blocked a shot by Kalkbrenner and on the other end Black made an alley-oop pass to Brazile for a dunk with 13 seconds left in the half that cut Arkansas' deficit to 40-34.

The Bluejays jumped out to a 19-10 lead on Nembhard's three-pointer.