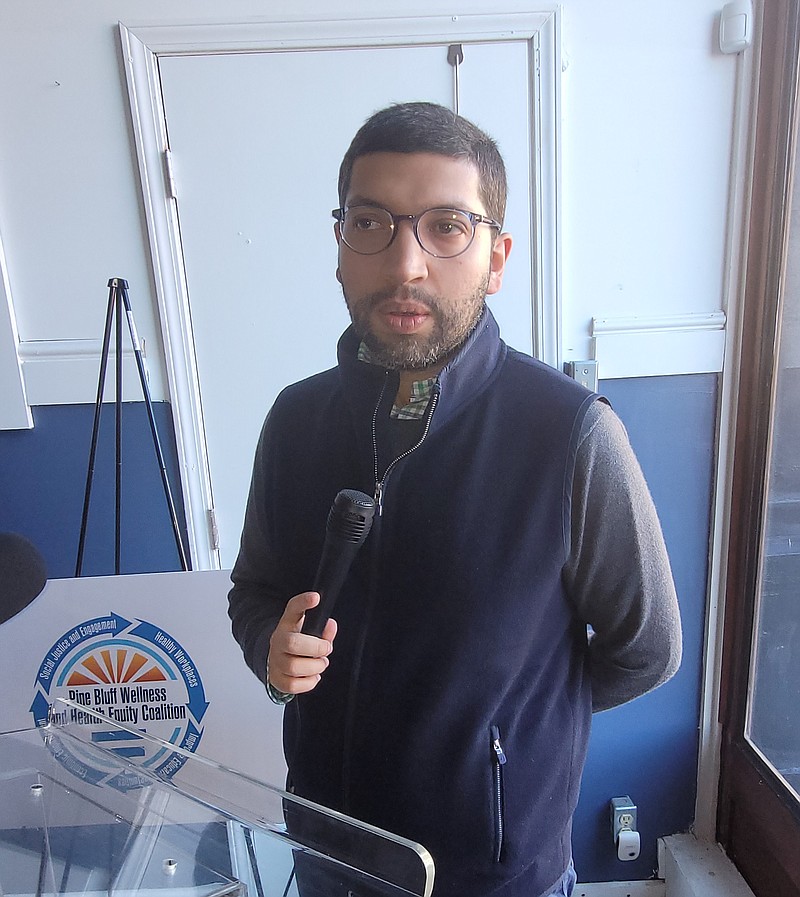 Dr. Brian Campbell, a hematologist and oncologist with the Jefferson Regional Medical Center Jones-Dunklin Cancer Center, discusses the health benefit of smokers who reduce their intake by five cigarettes a day. Campbell was among guest speakers during the observance of the Great American Smokeout Day at Indigo Blue Coffeehouse Nov. 17. (Special to The Commercial/Kim Jones Sneed)

A smoker who is experiencing respiratory or lung-related diseases will see a significant difference in their overall health if they reduce their intake by five cigarettes a day. This message was shared by Dr. Brian Campbell, a hematologist and oncologist with the Jefferson Regional Medical Center Jones-Dunklin Cancer Center in Pine Bluff.

He was among several guest speakers during the observance of the Great American Smokeout Day on Nov. 17. The event, which took place at Indigo Blue Coffeehouse at Pine Bluff, was presented under the theme of "A Judgment Free Zone."

"We see a lot of diseases that are reversible, like COPD and asthma," Campbell said during a press conference. "Patients who decrease their amount of smoking normally reduce their exacerbation rates. It's very, very important and patients will see a benefit early on."

According to Campbell, lung cancer is the leading cause of mortality due to smoking that causes more deaths than bone and breast cancer combined.

"More people will die from lung cancer," he said while stressing the need to begin smoking cessation as soon as possible.

Smokers in attendance were encouraged to make a pledge to go smoke-free or get a carbon monoxide reading. Free turkey sandwiches and chips were served with the idea of encouraging smokers to quit "cold turkey."

Dameon Bankston, who said he has been a smoker "off and on for 20 years," shared a personal testimonial.

"Smoking has its many triggers," he said.

He described those triggers as losing loved ones, becoming a young father and having grandchildren.

"We have seven kids and grandbabies. This kind of put a stress on me," Bankston said.

The group applauded as he announced that he had not smoked for 61 hours.

"I'm looking at getting additional help. Quitting cold turkey is not an option. You can try it but it causes anxiety. The withdrawal symptoms will cause you to say nasty things to people that you should not say," Bankston said as the group laughed.

Katherine Donald, executive director of the Coalition for a Tobacco Free Arkansas, agreed that it is difficult for smokers to quit abruptly.

"We do know that quitting cold turkey is not the proven method for most people. Only 3-7% of the smoking population can quit cold turkey. And I applaud those people!" Donald said. "In fact, research tells us that a person who tries to quit may be in the process seven, nine even up to 11 tries before they successfully quit. But the thing is if you fall off the wagon, get back on."

Individuals who are not tobacco users can be cheerleaders and supporters to those who try to quit.

"I took a look at the recent Arkansas Prevention Needs Assessment Survey, which is given to our sixth, eighth, 10th and 12th graders each year around the state," Wilkins said. "I was pleased to see that Jefferson County's combined 30-day cigarette use is not only below the state rate but has generally been falling since the 2018-2019 school year. We know that the risk and protective factors our children and youths face early in life have an impact on the decisions they make, and those decisions can have consequences throughout the lifespan, and for our families and communities."

Wilkins said Robinson and Jefferson County stand in support of the thousands across the county, state and nation on their journey toward a smoke-free life.

"We know it's an important step in promoting healthier outcomes and reducing cancer risks," Wilkins said. "We are so grateful for all the partners involved in this initiative, including our state and local prevention and treatment partners who, every day, are gathering data, building capacity and working on implementing solutions to address the issues we face with smoking and tobacco use."

Sponsors of the local observance included the Coalition for a Tobacco Free Arkansas, in partnership with the Pine Bluff Wellness and Health Equity Coalition and the University of Arkansas at Pine Bluff Minority Initiative Sub-Recipient Grant Office.

The inception of the Great American Smokeout stems from a 1970 event in Randolph, Mass. Arthur P. Mullaney, a high school guidance counselor, asked people to give up cigarettes for one day. He encouraged them to donate the money they would have spent on buying cigarettes to a high school scholarship fund. 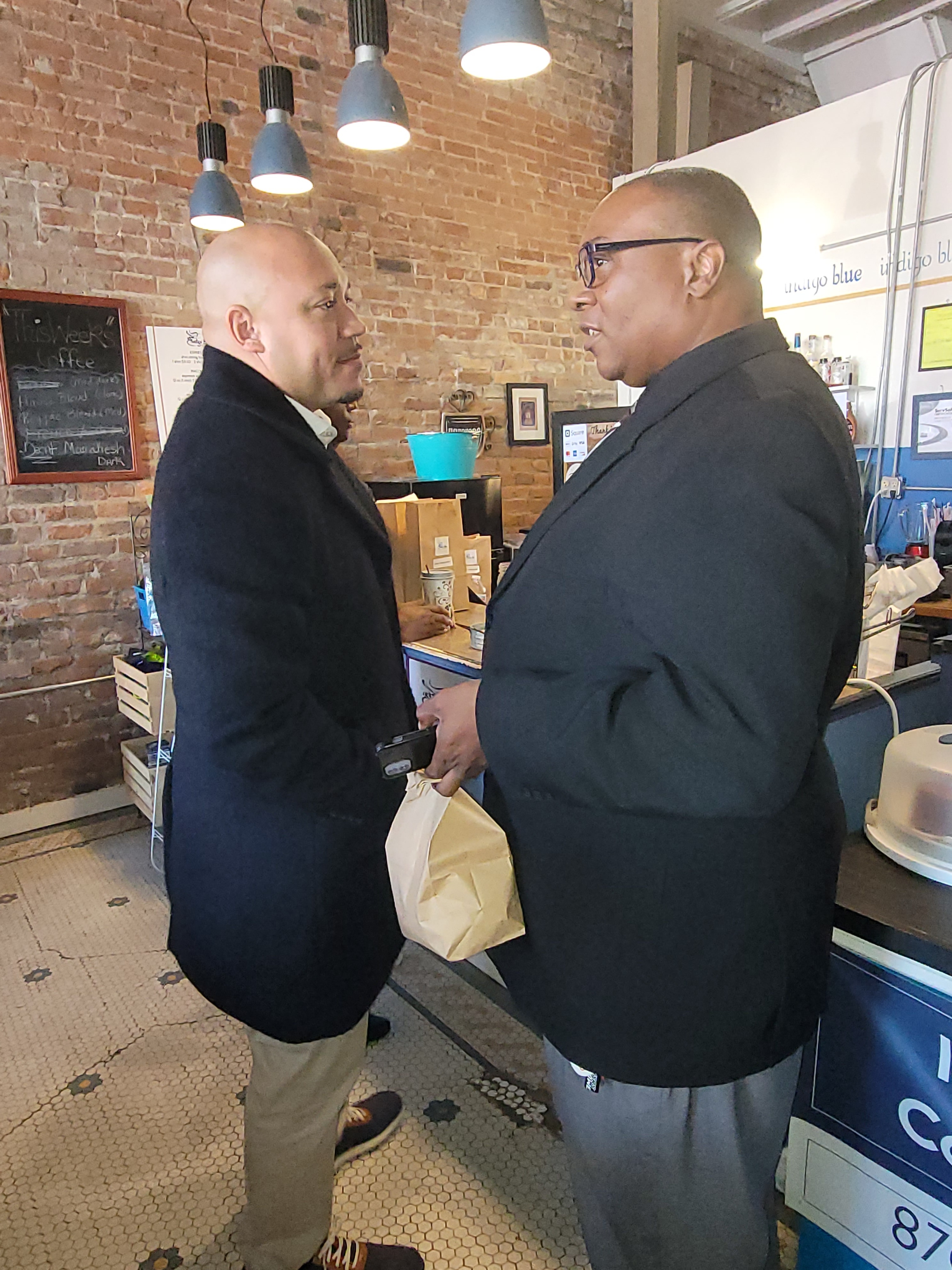