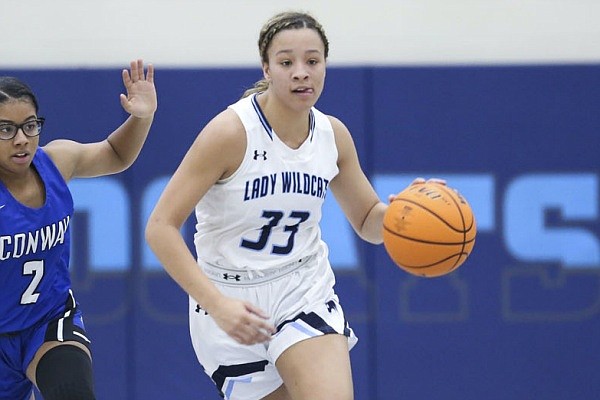 SPRINGDALE -- While a majority of high school basketball teams have already played a number of games, Springdale Har-Ber's girls had yet to take the floor for a regular-season game.

Those first-game jitters were prevalent for a while Tuesday night against Siloam Springs, but the Lady Wildcats finally smoothed things out and got their transition game untracked en route to a 54-30 victory in Wildcat Arena.

Har-Ber (1-0) closed out the first quarter with eight unanswered points for a 12-4 cushion, then proceeded to pull away from Siloam Springs (0-4) in the second half.

"The first game, they always have a few jitters," Jenkins said. "Even at home, where they should feel more comfortable, they just have to get some of it out. I mean, we haven't played against somebody else since June at team camp.

"It was a process of shaking those nerves out and settling into what we know we can do. We definitely have to take better care of the ball because we didn't do a good job of that."

Pacious McDaniel had Har-Ber's first six points and finished with a team-high 23, including two free throws that gave the Lady Wildcats a 6-4 cushion with 2 minutes left in the first quarter. It was a lead they never relinquished as Delaney Roller's bucket at Ella Luningham's two layups made it a 12-4 Har-Ber lead to end the first quarter.

That cushion grew to a 26-10 margin after McDaniel hit a three-point play with 1:45 before halftime.

"We did some of the things we wanted to do," Jenkins said. "They were excited and definitely ready to go, and I knew it was a matter of getting some of the rust off. They did that, so now they will settle in and maybe listen a little better in practice because of the thing coach has been preaching at you for the past couple of weeks came to light."

Siloam Springs did pull within 28-17 at halftime and was within single digits when four straight points by Brooke Smith closed the gap to 32-24 with 3:48 left in the third quarter. Har-Ber, however, closed out the third quarter with 13 unanswered points, and Roller's 3-pointer at the buzzer gave the Lady Wildcats a 47-26 cushion.

"We're playing good competition, and that was on purpose," said Siloam Springs coach Beau Tillery, whose team has suffered three of its four losses against 6A-West teams. "As much as it's frustrating right now, I think it's going to make us better in the long haul.

"Their length is frustrating, and their quickness gives us problems. They were just a little more physical than we are. I think when we handled the half-court pressure and full-court pressure and took our time to execute our offense, we did a good job."

Roller added 13 points for Har-Ber, while Brooke Ross had 13 for Siloam Springs.

Har-Ber used scoring runs in the second and third quarters to take control and pull away from Siloam Springs as the Wildcats won their home opener.

The Panthers (2-2) had a 16-11 lead early in the second quarter after Nathan Vachon hit a 3-pointers and Nathan Hawbaker added a bucket, but Har-Ber (3-0) scored 13 of the next 15 points and claimed a 24-18 halftime lead. The Wildcats then followed a Dalton Newman bucket to start the third quarter with 11 straight points and claimed a 35-20 cushion.