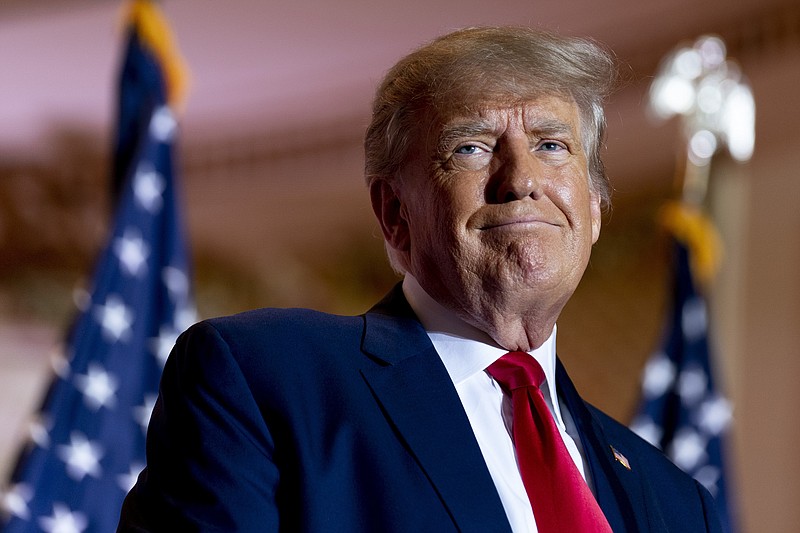 FILE - Former President Donald Trump announces he is running for president for the third time as he smiles while speaking at Mar-a-Lago in Palm Beach, Fla., Nov. 15, 2022. A federal appeals court is hearing arguments Tuesday on whether to shut down an independent review of the documents seized in an FBI search of former President Donald Trump’s Florida home. (AP Photo/Andrew Harnik, File)

WASHINGTON -- A federal appeals court questioned Tuesday whether former President Donald Trump was seeking special treatment in asking that the special master conduct an independent inspection of records taken in the Aug. 8 FBI search of his Florida estate.

"Other than the fact that this involves a former president, everything else about this is indistinguishable from any pre-indictment search warrant," said William Pryor, chief judge for the U.S. Court of Appeals for the 11th Circuit.

"We've got to be concerned about the precedent that we would create that would allow any target of a federal criminal investigation to go into a district court and to have a district court entertain this kind of petition ... and interfere with the executive branch's ongoing investigation," added Pryor, who was appointed by former President George W. Bush.

The special master in the Mar-a-Lago case, veteran New York Judge Raymond Dearie, was appointed in September at the Trump team's request. He was tasked with conducting an independent inspection of the roughly 13,000 documents seized in the search and filtering out from the criminal investigation any that might be covered by claims of attorney-client or executive privilege.

The Justice Department has sought an immediate end to a special master review process that it says has unnecessarily delayed its investigation into the presence of classified documents at Mar-a-Lago.

The Florida judge who appointed Dearie, Aileen Cannon, blocked federal prosecutors from using the seized records as part of their investigation during the course of Dearie's work.

A three-judge panel of the appeals court later restored the Justice Department's access to the roughly 100 documents with classification markings. But prosecutors say they want unfettered access to the much larger trove of unclassified records and have asked the court to end the process entirely.

Though the investigation is centered on the possible mishandling of classified records, the Justice Department says it also regards the unclassified documents recovered from Mar-a-Lago as relevant to the probe. That's because of the mingling with classified documents of personal records that prosecutors say could provide key evidence of who possessed or handled the records.

In court papers, the Justice Department stated that the only purpose for which it's been able to use the unclassified documents so far has been to engage in a "prolonged dispute" with the Trump team about their categorization.

It was not immediately clear when the three-judge panel, including Trump appointees Britt Grant and Andrew Brasher, might rule.

James Trusty, the Trump lawyer, described as "overblown" the Justice Department's arguments that its investigation had been slowed. He said the department already had access to the classified documents and he minimized the importance of the remaining materials, describing them as birthday cards, thank you notes, photographs and other personal items.

"It is not realistic for the government to complain that this has hobbled their ability to investigate," Trusty said.

He suggested that the search warrant had resulted in an overly broad seizure of materials, though Pryor noted, "I don't think it's necessarily the fault of the government if someone has intermingled classified documents and all kinds of other personal property."

Trusty denied that he was seeking special treatment for Trump but also urged the judges to consider the context of the case.

"This is a situation where a political rival has been subjected to a search warrant where thousands of personal materials have been taken," he said.

When Trusty at one point referred to the FBI search as a "raid," Grant chidingly asked him whether "raid is the right term for execution of a warrant." Trusty apologized for using what he acknowledged was a "loaded term."

The special master process has been playing out alongside a criminal investigation into the retention of the documents and possible obstruction.

Attorney General Merrick Garland last week named a veteran prosecutor, Jack Smith, to serve as special counsel and oversee the Mar-a-Lago investigation and key aspects of a separate investigation into efforts to overturn the results of the 2020 presidential election.