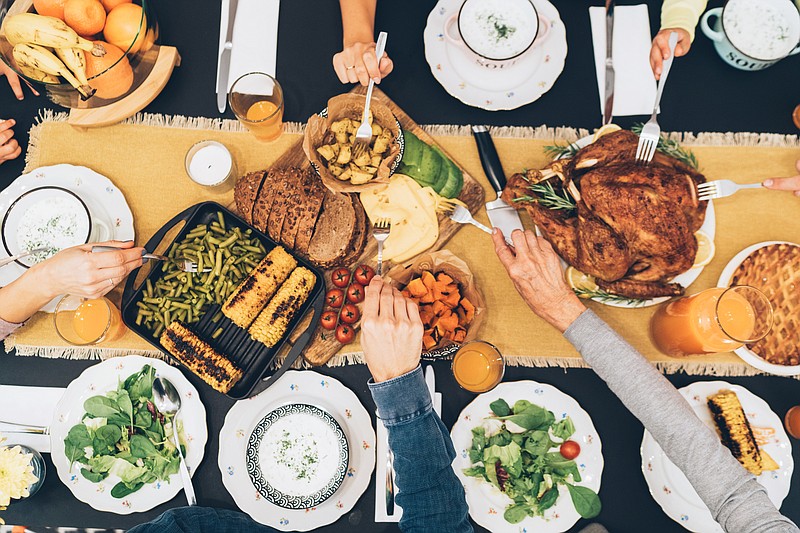 Growing up, my parents hosted our Armstrong family Thanksgiving dinner.

Dad was in charge of the turkey and dressing (a happy blend of cornbread and dried cubed bread to honor his Nebraska and Arkansas roots). Mom made salads or sides. My grandparents and aunts and uncles brought their traditional dishes.

My uncle Robert learned to make baked garlic cheese grits, which quickly became our family's all-holidays, any-occasion signature dish. My aunt Anne made her vinegar beans (green beans with bacon and apple cider vinegar) that all of us except her call Anne Beans. My grandmother, famous for her loaves of fresh-baked white bread she'd give to friends and strangers alike at church each Sunday, brought her wonderful bread.

We usually had some orange cranberry relish (plus the canned stuff for Mom and others who liked it), pea salad (cold green peas, white onion, cubed Cheddar and Miracle Whip), corn pudding (the only traditional dish I've never cared for), some manner of sweet potato casserole--a sacred duty I eventually took on--bunches of olives and pickles and such, and a variety of homemade pies.

We'd gather around the table, hold hands and sing the Wesleyan Grace together (there were four United Methodist ministers in my family). Grandpa would flip one of the nice plates in the air, then we'd all dig in. Later, we'd play touch football or take a walk, or just laze about the house watching the games or playing a board game together.

They're memories filled with tradition, love, laughter and unbutton-the-jeans-full bellies. It's why in 2005, when my fiancé Ben and I were trying to plan a simple, small wedding, we landed on Thanksgiving Day.

I'd done the big wedding the first time around, for a marriage that lasted no longer than the honeymoon in Belize where my former new husband declared that after four years together, he'd made a mistake marrying me. I'd been heartbroken and humiliated. I was sure I'd never be able to trust in love again.

But then I met Ben. He was the first person I went out with, a year post-divorce. And from the start, he was the easiest, most interesting person to be around. He had a huge barrel-chested laugh and a giant heart ready to share with someone.

Our first not-quite-blind date (his roommate John match-made us) was in late October. On Christmas he told me he loved me. On St. Patrick's Day we were engaged. And on Thanksgiving Day--exactly a year, a month, and a day after we'd met in person--we were married.

I hadn't wanted to repeat the big wedding, and frankly, we didn't have the funds for it. So we brainstormed with my dad, then minister at Western Hills UMC in Little Rock. We asked if he'd marry us, at the church, on Thanksgiving Day. Our guests? We invited both our families--Ben's mom and four brothers and their fams, and the dozen or so in my Armstrong clan. It was Thanksgiving, so everyone else had plans.

Because it was Thanksgiving, we instructed our families to come as casual as they would to any Thanksgiving meal. I wore a new dress, Ben wore a suit, but everyone else was there in comfortable jeans and sweaters.

Dad surprised us when it came time for the vows. We had such a small group of attendees, he invited everyone up to the altar area to surround us with their love as we exchanged our vows. It was touching and special, and unlike any other wedding I'd seen.

Afterwards, we held our reception in Western Hills' fellowship hall, which many years ago was a country club and still had good bones. One of Dad's congregants, a caterer, offered us her dishware and chafing dishes. We set up on several round tables with a buffet line in the hallway. My sister and I went to Kroger Thanksgiving morning to find some sort of table-dressing supplies. We ended up with autumn leaves and candles and Ferrero Rocher gold-wrapped chocolates.

And my family cooked up our traditional dishes in much larger portions, so that after we were wed, both families sat down to our traditional Thanksgiving dinner, together.

We were married on Nov. 24, 2005. One of my attorney brothers-in-law tried to argue that choosing Thanksgiving meant that Ben only had to get me an anniversary present once every seven years when Thanksgiving fell on the 24th, our true Thanksiversary.

I vetoed that idea on the spot.

I've always loved Thanksgiving. It's my favorite holiday. But for the past 17 years, it's also been inextricably linked to overwhelming, flood-level gratitude for this funny, smart, caring man I married, and all the joys he's brought into my life.

This year is one of our "true" Thanksiversaries. But the love that sprang for it lasts all year, every year. Our wedding is and always will be my favorite Thanksgiving memory.

Those cheese grits, though. They're a close second.

Jenny Armstrong Boulden is a writer for Arkansas Blue Cross and Blue Shield.