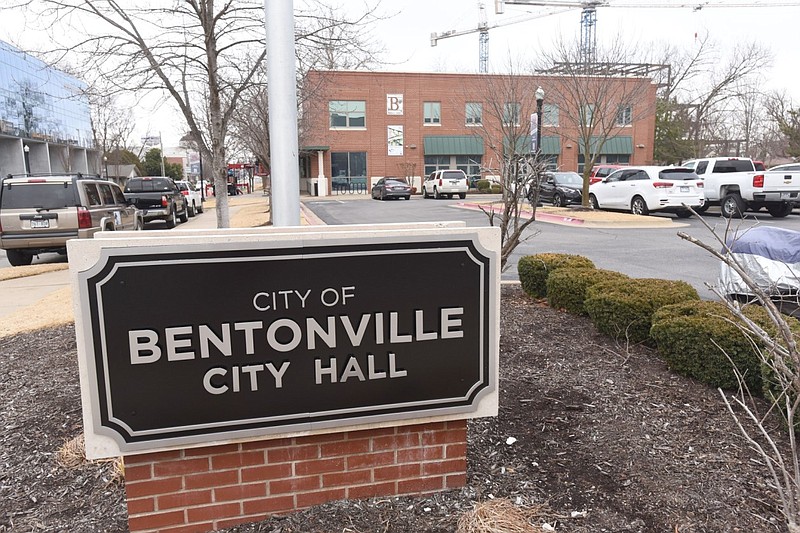 A sign is posted at Bentonville City Hall at 305 S.W. A St. in this Dec. 29, 2020 file photo. At the time, the city was preparing to move City Hall from its location near the Bentonville Square to the Southwest A Street location. (NWA Democrat-Gazette file photo)

There is a strong focus on personnel and technology in the budget to meet the needs and quality standards of a growing city, Mayor Stephanie Orman said in a letter that kicked off the budget discussion.

Capital expenditures in the general fund total $17.1 million, according to budget documents.

Overall, the general fund budget shows a projected net of $356,159.

Some budget highlights, which include department operations and maintenance, include:

• A 6% merit raise for city employees. In comparison, Benton County approved a 5% pay increase for employees during its budget approval last week made up of a 2% cost of living increase and a 3% merit raise with an overall cap at 7%.

The budget shows more than 30 position additions or upgrades, with most coming from police and fire operations.

"The guiding principles of public safety, fiscal sustainability, quality of life and economic vitality continue to guide budget recommendations," Orman said. "The city remains financially sound and pragmatic in our mission to serve our citizens as we carry on a reputation of being a good steward of our community's tax dollars."

Budget development was a collaborative effort with detailed input from every department and city leadership, Orman said.

In other action Tuesday, the City Council unanimously approved:

• A $75,000 budget adjustment for Police Department fuel based on increased costs this year. The amount will cover the remaining fuel expenses for November and December.

• A $45,000 agreement with Volkert Inc. for property acquisition services for city sidewalk improvements.

• An $8,500 budget adjustment to cover public notification (newspaper publication) expenses for the rest of the year.

• Changes to section 8.7 of the city personnel policy manual.

The Bentonville City Council on Tuesday night adopted a resolution to recognize Sgt. Michael Meadors on his retirement from the Police Department, effective Oct. 31. Meadors has more than 20 years of law enforcement service including 12 years with Bentonville.