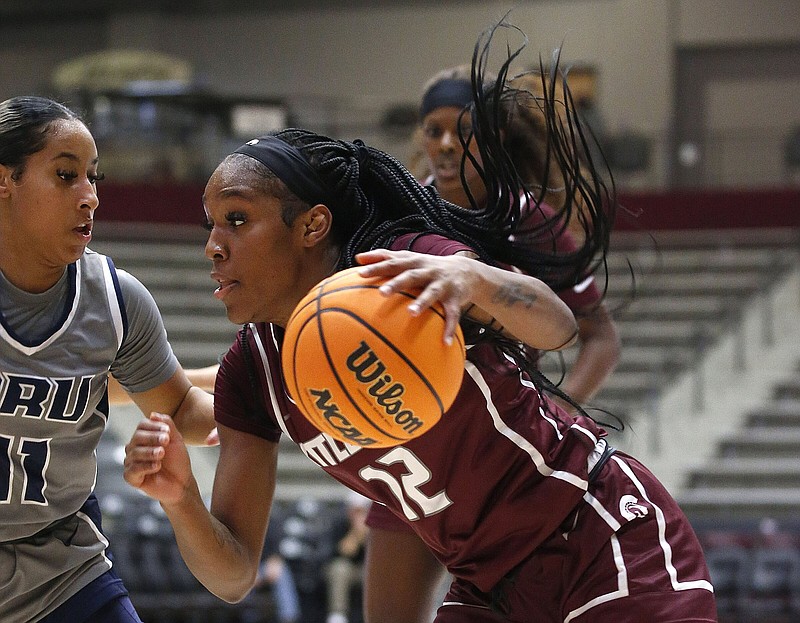 For 40 minutes, the Oral Roberts Golden Eagles were the better of two teams in transition on the day before Thanksgiving.

Senior point guard Hannah Cooper took control of her team and the game to lead the Oral Roberts women to a 74-62 victory over the University of Arkansas at Little Rock at the Stephens Center in Little Rock on Wednesday.

Cooper's 22 points and 8 assists led Oral Roberts (1-6) and impressed at least three other participants in the game played before a crowd of 1,531, including UALR Coach Joe Foley.

"All my guards trust me, and I think we're starting to build that trust a lot more," Cooper said. "We know who can score, and we understand each other a lot better now, and I think that carried over in this game."

Kelsi Musick is in her first season as Oral Roberts' head coach and said she depends on Cooper's leadership.

"She's got the capability to take over," she said. "With our style of play, with our offense and the dribble-drive, it really does fit her style of play and her God-given talent. She's embracing it, and that's why she's been able to excel."

Cooper was on the court for 38 minutes, 12 seconds.

"Faith is a freshman, and you know how that is," Foley said. "We just have to mature, and that's going to take some games."

Free throws by senior forward Angelique Francis and Abiola, a rebound layup by Abiola, and a driving layup by junior guard Tia Harvey were key to UALR's 10-2 run that overcame the Golden Eagles' 42-32 lead after Cooper's steal and layup with 6:23 left in the third quarter.

"Their true motion is extremely hard to guard," Musick said. "We implemented a zone that we've only been running for a couple of days. My girls played hard against it, but what [Foley] has done here is amazing."

Harvey and Francis, both starters against Oral Roberts, are the only players currently on UALR's roster who played under Foley last season.

"We got a lot of new kids, and they're not real confident in what they're doing in our offense right now," Foley said. "That carries over to the defense quite a bit. You know, it's just going to take a while."

Visa issues have kept junior forward Sali Kourouma in her native nation of Mali this semester, but Foley said he is hopeful she returns soon. Kourouma was UALR's leading scorer last season.

"Hopefully, we get her back next semester, but we lost a lot of scoring from last year, so we don't really know who to go to yet," Foley said.

"We're not a good three-point shooting team by any means, but they went to the zone, and against the zone, you have to hit a few of those," Foley said. "Hopefully, we will."

Lee said Foley has maintained steady themes in practice as UALR prepares for its first season as a member of the Ohio Valley Conference. She said he repeated at least parts of those during timeouts against Oral Roberts

"He talks about how we have to get on their dominant hand because they can't go both ways," she said. "He said that today, that we weren't doing that."

"She could go with both hands," she said. "When you cut off one hand, she would counter with the other, and that made her really hard to guard."

Musick said her team's win over UALR was significant.