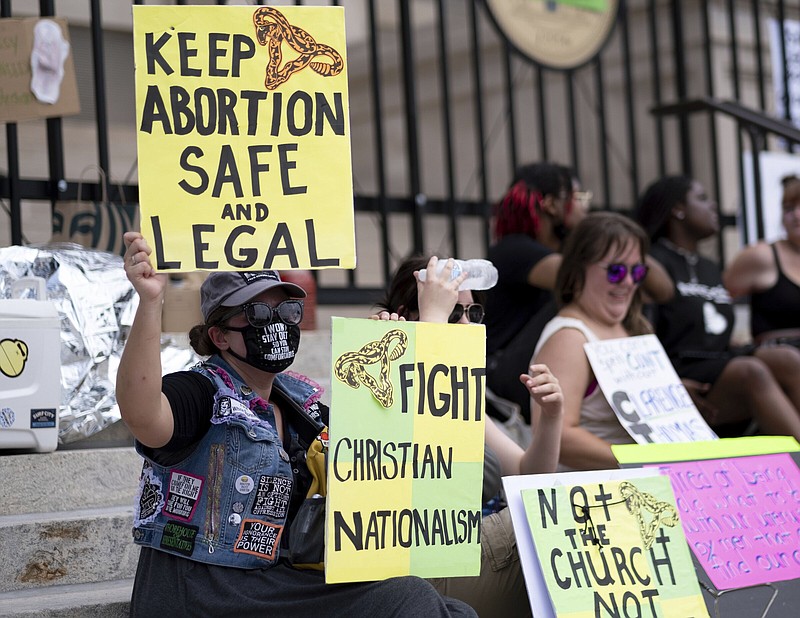 A small group, including Stephanie Batchelor (left), sits on the steps of the Georgia state Capitol protesting the overturning of Roe v. Wade in June. (AP File/Ben Gray)

ATLANTA — Georgia’s 2019 abortion law that restricts the procedure once a doctor can detect fetal cardiac activity will be back in effect during the legal process, the state Supreme Court ordered on Wednesday.

The ruling was unanimous with the exception of Justices Nels S.D. Peterson, who was disqualified, and Andrew Pin-son, who did not participate.

Attorneys representing Gov. Brian Kemp had asked the Georgia Supreme Court to reverse a Superior Court ruling released last week that blocked enforcement of the state’s anti-abortion law, which typically bars the procedure in most cases about six weeks into a pregnancy and before many know they are pregnant.

Fulton Superior Court Judge Robert McBurney last week ordered the state to no longer enforce the 2019 law. The law had been in effect in Georgia since July.

The state has not yet filed the appeal seeking the permanent overturning of the Fulton Court ruling. Kara Richardson, spokeswoman for Attorney General Chris Carr, said they were pleased with the order, but declined to comment further, citing the pending appeal.

Providers spent the past week performing abortions up to about 22 weeks of pregnancy, the state’s restriction before the governor signed the 2019 law. Feminist Women’s Health Center Director Kwajelyn Jackson, whose group was among those who filed the lawsuit challenging the law, said she was disappointed in the Supreme Court’s order.

“But we are grateful to our staff and providers who worked really hard over the past week to care for as many patients as we could,” she said. “We know that our patients deserve more and are hopeful that when we go back to court we will be vindicated.” Jackson said there were no abortions scheduled for Wednesday, but patients where fetal cardiac activity could already be detected were scheduled to come in for the procedure on Saturday.

“We will have to call patients who were scheduled for Saturday and disappoint them again,” Jackson said.

Attorneys for the state had told the Supreme Court that it is in the public interest not only to overturn McBurney’s ruling, but to block it while the court considers the case.

“The harm to the state is significant and irreparable,” attorneys wrote in the appeal filed with the court. “Unborn children are at risk every day that the injunction continues.” It’s unclear when the Supreme Court will make a decision concerning the Fulton County ruling.

Attorneys representing abortion rights activists and providers last month argued that when the law passed in 2019, Roe v. Wade — the 1973 U.S. Supreme Court ruling that guaranteed a right to an abortion until a fetus was viable outside the mother’s body — was the law of the land and state law does not allow the Legislature to enact statutes that violate the law.

A ruling by the 11th U.S. Circuit Court of Appeals in July allowed Georgia’s 2019 abortion law to be enforced. The U.S. Supreme Court’s June decision to overturn Roe

McBurney said that just because the Dobbs decision overturned the nearly 50-year-old Roe decision, it did not retroactively make the 2019 passage of Georgia’s abortion law legal.

In their appeal, attorneys for the state said it doesn’t matter whether the law was not constitutional when it passed the General Assembly in 2019 as it is now in line with the law as established by the Dobbs decision.