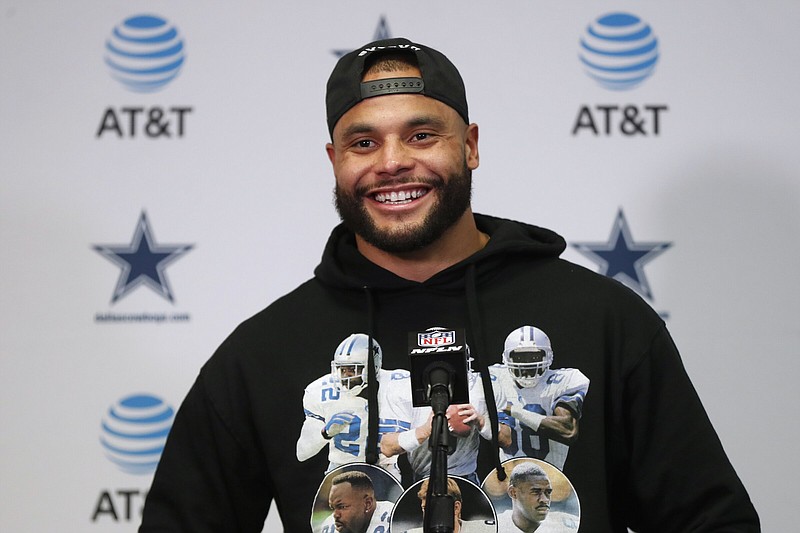 Quarterback Dak Prescott and the Dallas Cowboys look to complete the season sweep of the New York Giants today at AT&T Stadium in Arlington, Texas. The Cowboys won the first meeting 23-16 in Week 3. (AP/Bruce Kluckhohn)

ARLINGTON, Texas -- Dak Prescott and the Dallas Cowboys channeled the anger from a collapse one week into the biggest road rout in club history the next.

Now they're thinking about building on all the things that went right while the opponent tries to figure out what went wrong.

Not much else is similar for this pair of playoff contenders, the Cowboys are healthy and appearing primed to get on a roll, the Giants sputtering and dealing with injuries.

Dallas blew a 14-point lead entering the fourth quarter for the first time in franchise history in an overtime loss at Green Bay before one of its most dominant performances in a long time in a 40-3 victory at Minnesota.

Prescott is finding a rhythm after missing five games with a fractured thumb on his throwing hand, surrounded by a mostly healthy roster with plenty of playmakers on defense, too.

"I think Coach [Mike] McCarthy said it best," Prescott said. "Take a picture of what it felt like, of what it looked like when we were at our best. And when you're not, remind yourself or do the things that are necessary to get back to that."

The Giants just gave up season highs in points and turnovers (three) in a 31-18 loss to Detroit that dropped them into a tie with the Cowboys.

Since Dallas won 23-16 at New York in Week 3, the Giants would essentially fall two games behind the defending NFC East champions with another loss to them.

This is where the short week could come in handy for New York. It's just the second Thanksgiving meeting out of 122 overall in the storied rivalry.

"I think it makes it easier because we have no choice, but to quickly move on to the next opponent," Giants defensive end Leonard Williams said. "Regardless of win or lose, every week we talk about flushing the last game and moving on to the next one."

New York quarterback Daniel Jones has four rushing touchdowns, more than in any of his first three seasons. He probably doesn't want to be reminded of one he didn't get last season.

Jones returns to the field where he was taken off on a cart last year after stumbling and almost falling from a hit by Dallas linebacker Jabril Cox.

The helmet-to-helmet contact came near a pylon with Jones trying to get across the goal line.

That play didn't come up in Jones' meeting with reporters, but injuries at receiver and in the offensive line did.

"It certainly is a challenge," said Jones, who is making his Thanksgiving debut. "But I think it's also a great opportunity for us to show who we are, show what we can do, our toughness."

Jones seemingly has been playing a game of musical chairs with his wide receivers and tight ends all season.

Sterling Shepard and rookie Wan'Dale Robinson are out for the season with ACL injuries. Veteran Kenny Golladay has been in and out of the doghouse.

(13) 20.4 POINTS 16.7 (1) WHAT TO WATCH The 122nd meeting between the NFC East rivals is just the second on Thanksgiving. Dallas won the other meeting 30-3 in 1992. The Cowboys have won 10 of the past 11 meetings since the end of the Giants’ three-game winning streak. The last two of those New York victories were in Dallas QB Dak Prescott’s rookie year in 2016. He has won all nine of his starts against the Giants since. 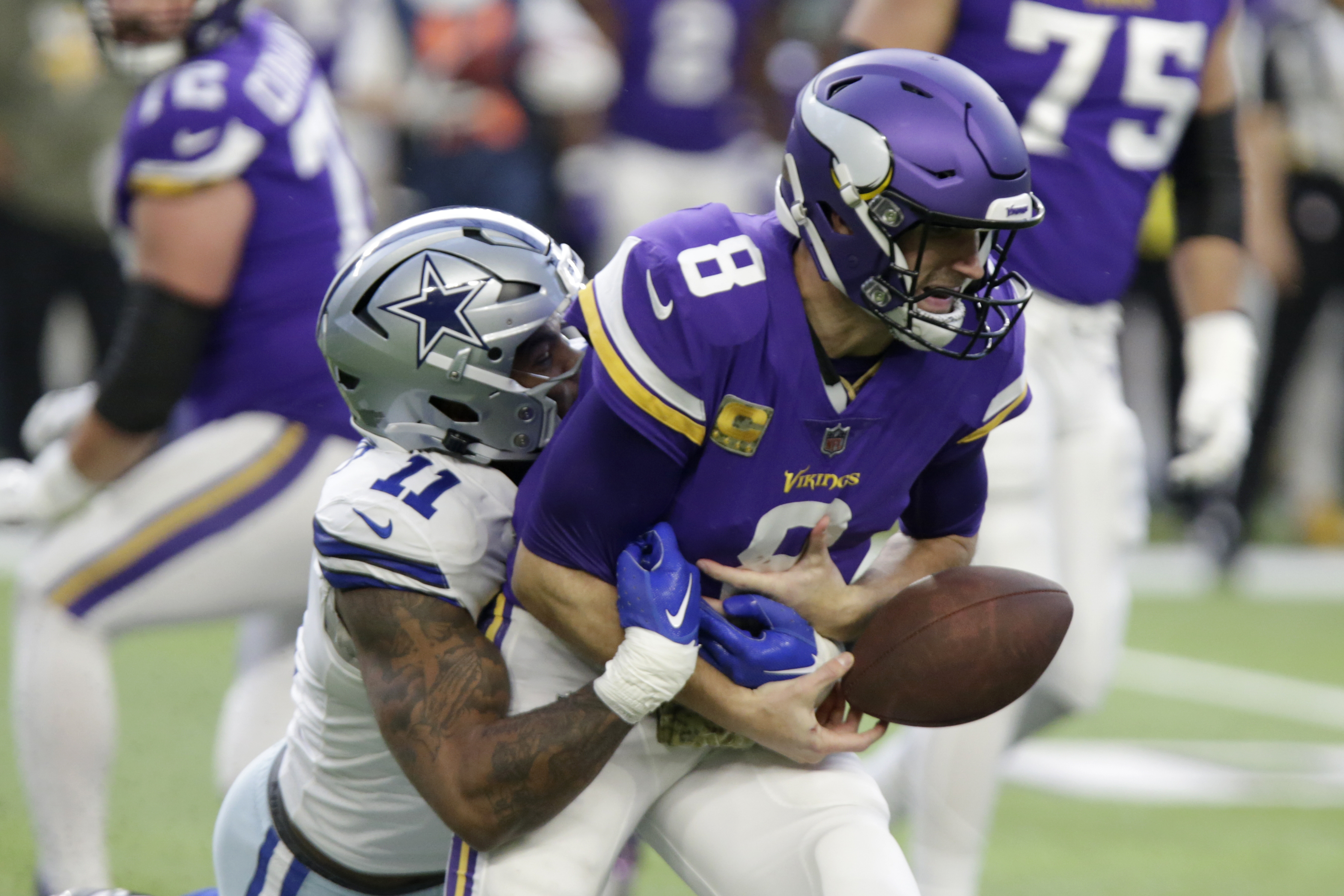 Minnesota Vikings quarterback Kirk Cousins (8) fumbles the ball as he is tackled by Dallas Cowboys linebacker Micah Parsons (11) during the first half of an NFL football game, Sunday, Nov. 20, 2022, in Minneapolis. (AP Photo/Andy Clayton-King) 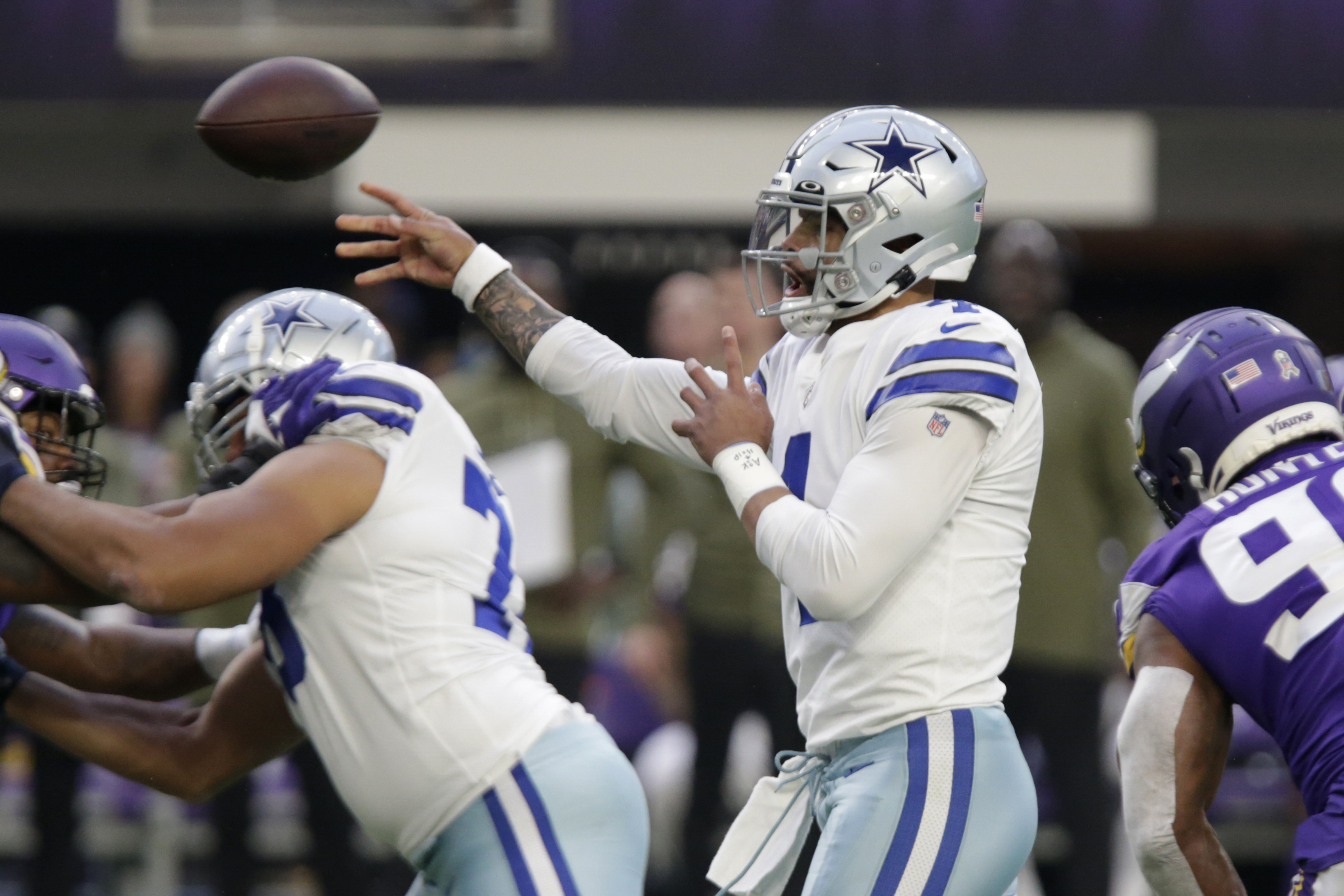 Dallas Cowboys quarterback Dak Prescott throws a pass during the first half of an NFL football game against the Minnesota Vikings, Sunday, Nov. 20, 2022, in Minneapolis. (AP Photo/Andy Clayton-King) 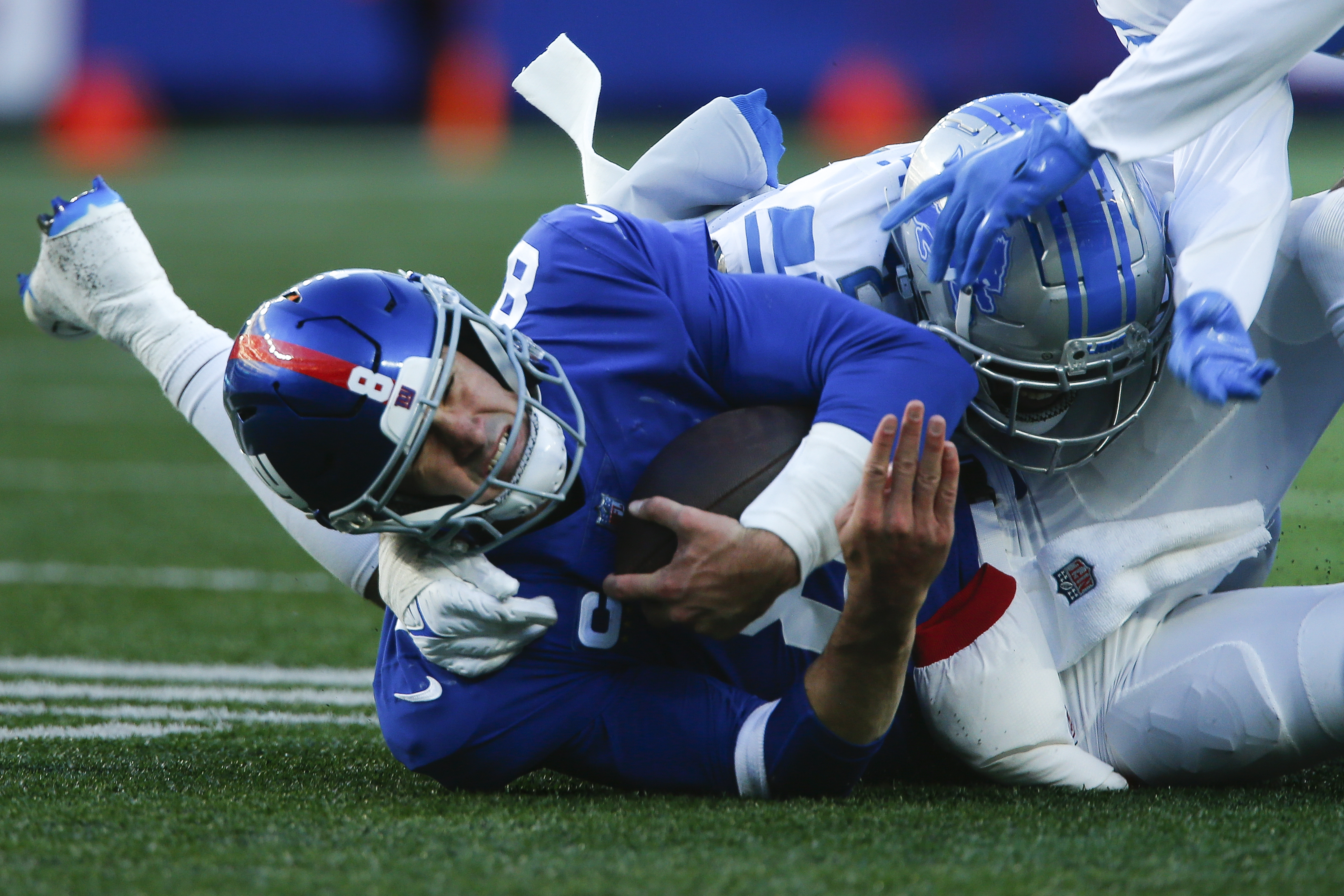 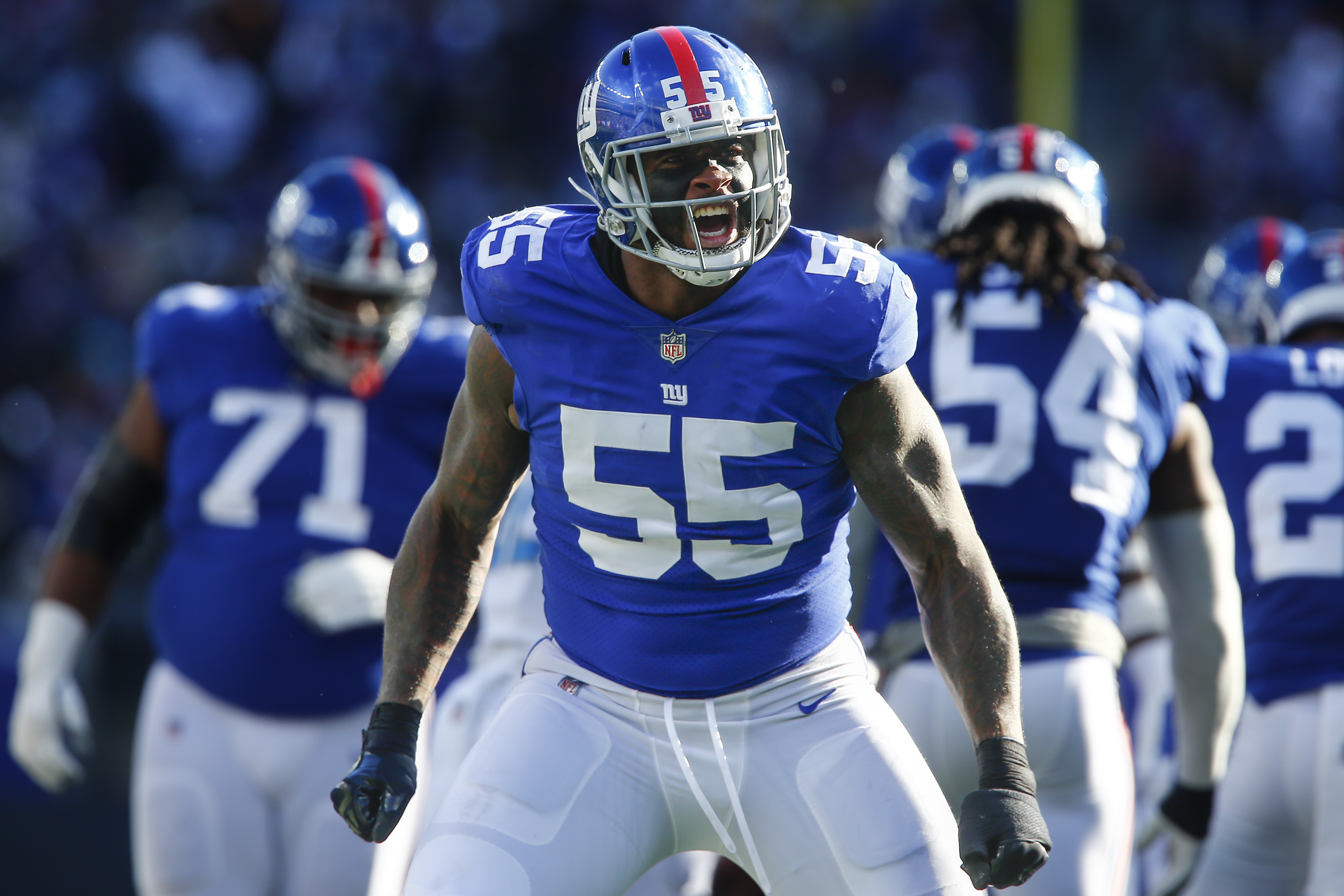 New York Giants linebacker Jihad Ward (55) reacts after making a stop during the first half of an NFL football game against the Detroit Lions, Sunday, Nov. 20, 2022, in East Rutherford, N.J. (AP Photo/John Munson) 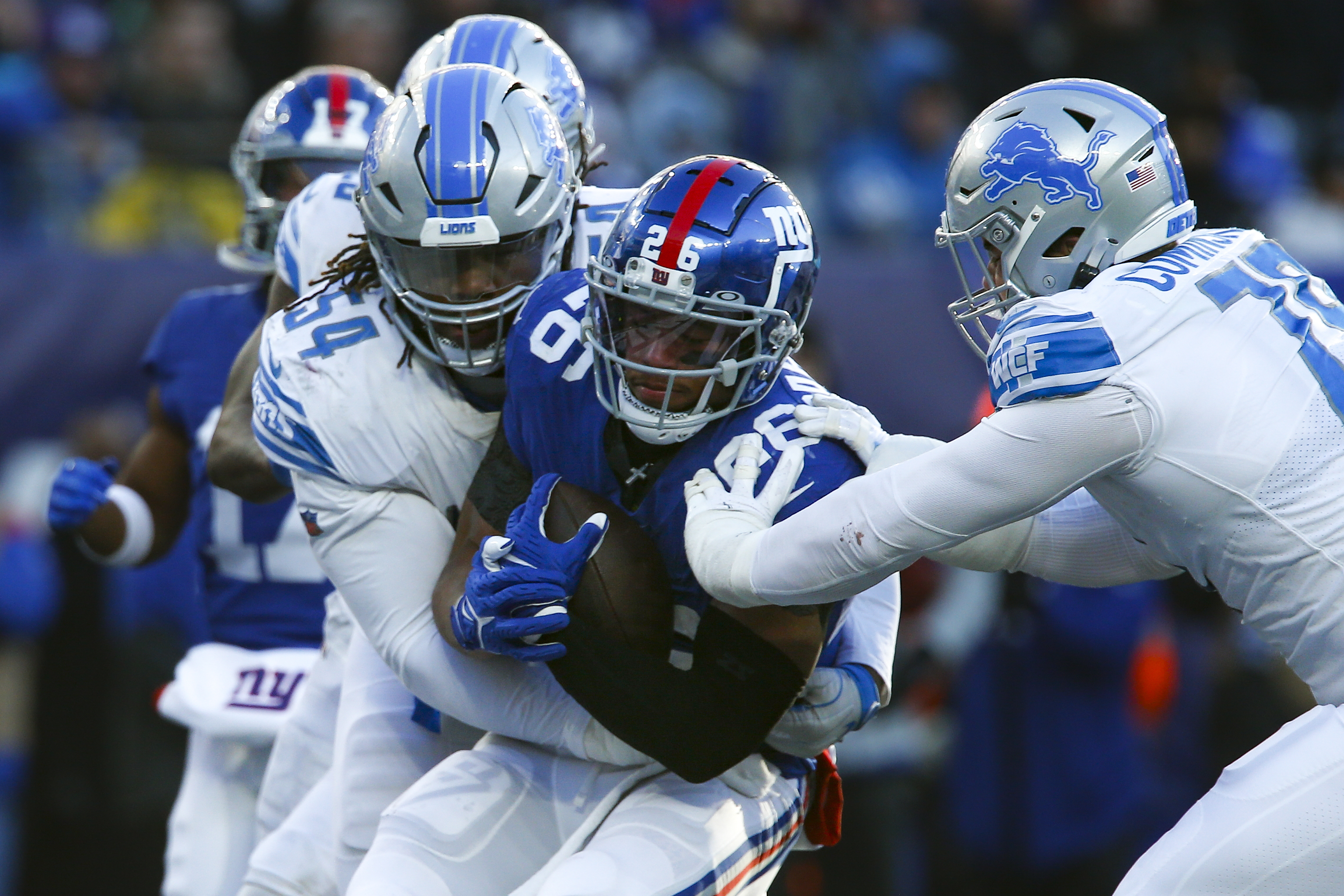