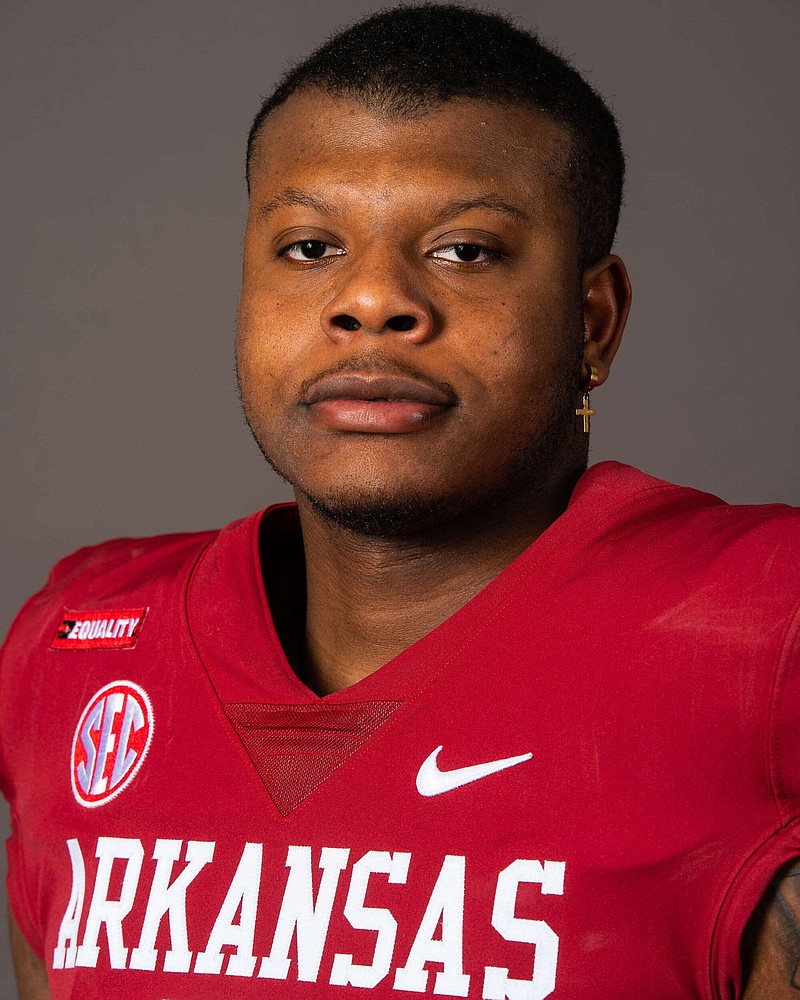 FAYETTEVILLE -- The University of Arkansas football team found out the full value of a "healthy" KJ Jefferson in its just-concluded three-game stretch of home games.

The junior quarterback, back on the upswing from a shoulder injury he suffered in the second half of a 41-27 win at Auburn on Oct 29, will return to the site of his first major statement game on Friday when the Razorbacks face Missouri in the Battle Line Rivalry.

Jefferson had four touchdowns and 306 total yards in a 50-48 loss to the Tigers at Faurot Field on Dec. 5, 2020, in a spot start behind Feleipe Franks, his first since an ill-fated appearance at No. 1 LSU in 2019 as a true freshman.

"I mean, ooh, that was a minute ago," Jefferson recalled on Tuesday. "It was pretty cool. It was during covid so it wasn't that many people there.

"But overall though, just me being able to start that game with Feleipe on the sideline, helping me out with different plays and different signals and calling stuff out to me. It was pretty fun to be out there and start that game, knowing it's an SEC game, a big rivalry game and also it's a trophy game."

Jefferson was mum on whether Friday's game could be his last in the regular season for the Razorbacks, saying he hasn't considered his plans for 2023.

"I'm worried about Missouri and going out and making sure we get that win and keeping that trophy here. So I'm not worried about the future. I'm in the present right now."

The self-assured team leader, feeling good enough to bypass a Novocaine shot last week, dropped deep-ball touchdowns in to Matt Landers and Ketron Jackson, and also hit Landers with a pin-point slant pass for an 8-yard score as the Razorbacks jumped all over No. 14 Ole Miss.

"Man, it's nice to have KJ back," a jubilant Coach Sam Pittman said in his opening postgame remarks."He looked pretty good, didn't he?

"We weren't too clean on the first two ... scoring drives, but he made us clean because of his athleticism."

Offensive tackle Dalton Wagner touted Jefferson's return as the key to a hot start, the resurgence of the running game, that accounted for a season-high 335 yards behind 232 from Raheim Sanders, and the team's overall good vibe.

"I feel the same," he said. "I'm pretty good. Just trying to finish the season out strong, the right way."

Missouri coaches noted Jefferson's presence as being a game changer for the Hogs.

Baker was linebackers coach at LSU in 2021 when Jefferson made one of his great escapes from a would-be sack to hit Dominique Johnson for a critical 43-yard touchdown pass to forge a 10-10 tie in the third quarter.

"You know he always seems to be able to get out of the pocket and break tackles."

"The quarterback is the engine that makes them go," he said. "Obviously this will be the third time that we've played against him. Golly, I hope he's graduating or going pro or something. Holy cow he's an unbelievable player."

Jefferson has been on a wild health ride over the last couple of months. He sat out a 40-17 loss to Mississippi State while in concussion protocols, then bounced back with a career-best 367 passing yards, 5 touchdowns and 399 total yards in a 52-35 rout at BYU.

The following week Jefferson engineered a win at Auburn with 279 total yards and 3 touchdowns of responsibility to help snap a six-game losing streak to the Tigers.

However, he took a hit in the second half of that game that injured his right clavicle, preventing him from practicing much the following week as Arkansas started its three-game homestead.

An ailing Jefferson took a shot for the pain and was simply not himself in a 21-19 loss to Liberty, though he heated up toward the end.

Jefferson and the Razorbacks elected to let his sore throwing shoulder rest and recover during the week of the LSU game and Arkansas put on a strong defensive showing in that 13-10 loss.

Now the Razorbacks seem to have recovered the statistical balance coordinator Kendal Briles prefers. Arkansas is 19th in total offense with 465.5 yards per game heading into the regular season finale. The Razorbacks average 233.5 rushing yards per game to rank 8th in the country and 232 passing yards to rank 65th.