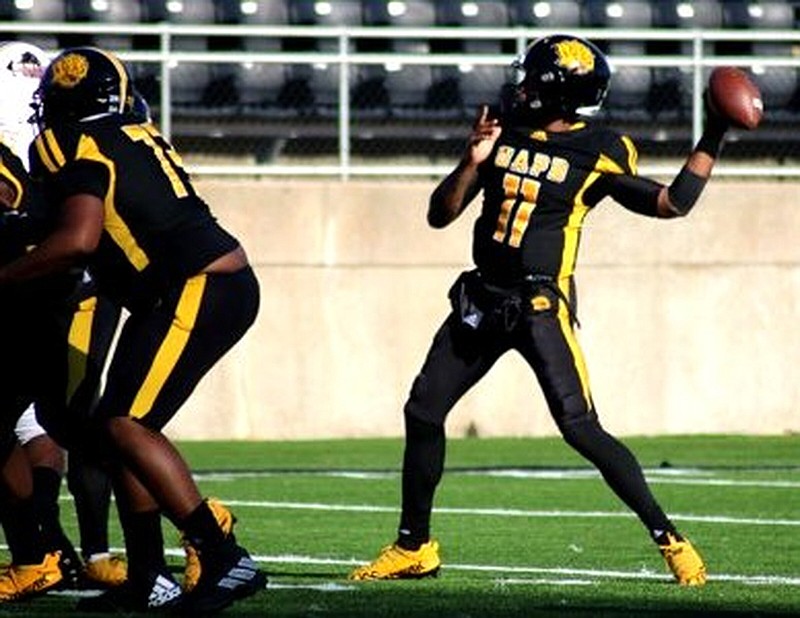 UAPB quarterback Skyler Perry drops back for a pass against Prairie View A&M on Nov. 12. (Special to The Commercial/Jamie Hooks)

In five seasons, Skyler Perry has played under three head coaches, started the majority of his 43 games in a Golden Lion uniform, was named a Southwestern Athletic Conference Impact Player of the Year and played in a SWAC championship game.

“It kind of hasn’t touched me yet,” the quarterback said after a loss to Prairie View A&M University nearly two weeks ago. “It’s been on the back end of my mind, just thinking about it as a whole.” Among the many things Perry has to be thankful for is the scholarship granted to him out of Edna Karr High School in New Orleans. Otherwise, he was signed to Texas Wesleyan University, a National Association of Intercollegiate Athletics school in Fort Worth.

“When [then-assistant head coach Doc Gamble] came down there personally and offered me a full scholarship, it was like, ‘why not?’” Perry said. “I was a one-year starter in high school. I didn’t have that many scholarships on the table, and I’m a kid coming from poverty just trying to make a way.” It also didn’t hurt Perry that he had a former Karr teammate on the Lions’ roster who persuaded him to give Pine Bluff life a try.

“I spend a lot of my time out here in Pine Bluff, and I’m well-connected with the community,” the New Orleans native said. “Pine Bluff will always be a second home for me.” Today isn’t a day for Perry and the University of Arkansas at Pine Bluff football team just to celebrate over a helping of Thanksgiving food. They are the guests, though, at Alabama State University’s Turkey Day Classic starting at 2 p.m.

Today, Perry closes a long, productive career with his 44th and final game, and one last opportunity to help the Lions prove they have their man at the helm for the future in Don Treadwell.

“Coach Treadwell’s a real good guy, always in high spirits,” Perry said. “He’s kind of like me, you know what I’m saying?

Always in high spirits and wants everyone to be the same way and have a good spirit about him. He’s a great person to be as a coach and an all-around person.” If Perry were to cast a vote on a head coach, he said he would give Treadwell his.

Treadwell, also the offensive coordinator, took over for the fired Gamble last month, and the 62-year-old’s positive demeanor has shone through in weekly conversations with members of the press who regularly cover the SWAC.

So, talking about his quarterback and sophomore running back Kayvon Britten — who needs 97 rushing yards to reach 1,000 for the season — brought out more of Treadwell’s aura of calmness.

“In my experience, if you have a leader who is talented and embraces the role of leadership, Skyler is one, and his positive energy permeates the whole team because he’s the same way every day,” Treadwell said of Perry.

“He doesn’t take days off in terms of the leadership qualities given to him. That’s a role he has earned, and we’re going to miss that.” Treadwell could also brag about senior left tackle Mark Evans II, who was recently invited to the NFL Players Association Collegiate Bowl, scheduled for Jan. 28 in Pasadena, Calif.

Evans is a Football Championship Subdivision All-American who has started in 9 of 10 games this season.

The Lions have been in festive atmospheres since Treadwell became interim coach, playing in Florida A&M University’s and Grambling State University’s homecomings and hosting senior day against Prairie View.

Yet, they’re 0-3 under Treadwell and need a win to avoid losing their ninth in a row, which would be the program’s longest skid in 36 years.

And, then, there’s the challenge of spoiling the Hornets’ big season-ender with first-year Coach Eddie Robinson Jr., another New Orleans native not related to the similarly named Grambling State coaching icon who won 408 games.

Alabama State has won the last five meetings against UAPB. The Lions last defeated the Hornets in 2012.

Despite the struggles of the past two seasons (UAPB is trying to avoid back-to-back 2-9 records), the left-handed Perry can walk away with career numbers many quarterbacks don’t get to amass.

He’s put to good use a fifth year of eligibility, which the NCAA granted all student athletes whose 2020-21 athletic year was impacted by the covid-19 pandemic.

UAPB played five spring games that season (a home game at Alabama State was stopped before halftime due to lightning and is not counted) and nearly won its first SWAC championship in nine years.

How does one put that into words? Treadwell wasn’t sure.

“All of us who have had the privilege of working with him will sit back and reflect, if you will.” Pe r r y m i ss e d two starts this year, one after a non-throwing hand injury and another after his throwing shoulder was hurt.

But he’s come back each time, only wishing he had more to give and maybe change the Lions’ fortunes for the better.

“Not trying to do too much, but I always feel like you can do more,” said Perry, the father of a 3-year-old daughter.

“I’m always going to put everything on the field.” Still, Perry is thankful for the path taken from the Big Easy.

“It went so fast,” he said. “I still remember my first day arriving in Pine Bluff.

I didn’t take any visits or things like that. Faith paid off for me greatly.”