Kiffin: Not No. 1 guy at Auburn 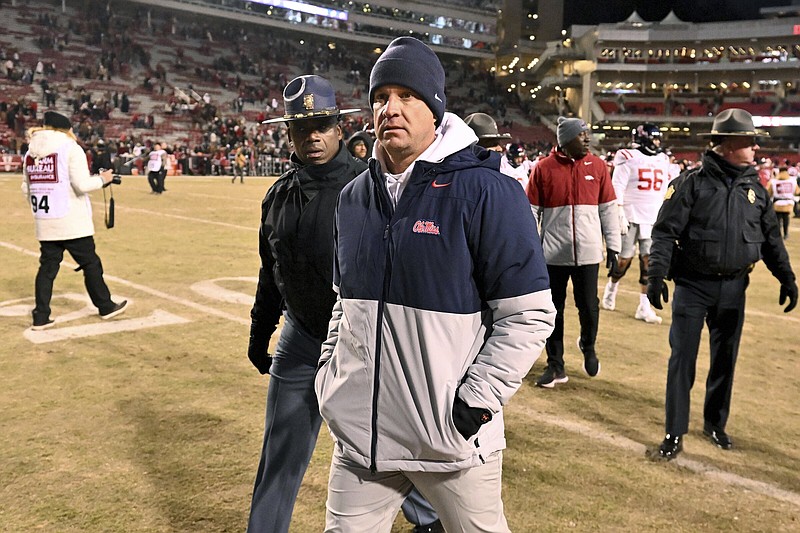 Mississippi coach Lane Kiffin walks back to the locker room after his loss to Arkansas during an NCAA college football game Saturday, Nov. 19, 2022, in Fayetteville, Ark. (AP Photo/Michael Woods)

After the University of Arkansas beat Ole Miss 41-27, Rebels Coach Lane Kiffin again was asked about speculation that he's the No. 1 candidate to be Auburn's next coach.

"I don't know that stuff out there -- No. 1 stuff," Kiffin said. "Maybe if they watched the first half I wouldn't be No. 1 anymore then."

The Razorbacks led 35-6 at halftime and scored a touchdown on their first possession of the third quarter to extend their lead to 42-6.

While Kiffin fell to 1-2 against Arkansas, his overall record in three years at Ole Miss is 23-11, including 18-6 since 2021 and 8-3 this season with a No. 20 ranking in the latest College Football Playoff poll.

"Very happy here and appreciative of the leadership here," Kiffin said. "I love being here. There's a lot of people coming back [next season], a lot of good guys coming back. Very excited about the future."

The SEC Network broadcasting crew of Tom Hart, Jordan Rodgers and Cole Cubelic discussed during the Arkansas-Ole Miss game which Rebels might follow Kiffin to Auburn if he switches jobs.

That prompted more questions for Kiffin about the Auburn job when he met with the media in Oxford this week.

"I mean, I don't know what else to say," Kiffin said. "I'm extremely happy here..

When it was speculated during the 1998 season that Ole Miss Coach Tommy Tuberville would leave to take the Auburn job, the Arkansas native said, "They'll have to carry me out of here in a pine box."

A few days later Tuberville -- now a U.S. senator for the state of Alabama -- was hired at Auburn.

When speculation continued to swirl during the 2006 season that Nick Saban would leave the Miami Dolphins to take the Alabama job, he became frustrated.

"I guess I have to say it -- I'm not going to be the Alabama coach," Saban said.

After the season he resigned at Miami and is now in his 16th season as Alabama's coach.

Kiffin got a raise after last season to $7.25 million and there are reports Ole Miss has offered another salary increase.

"I've been here three years and been fortunate enough to have three different contracts," Kiffin said. "So I don't know why all of a sudden a fourth contract makes people feel better."

Kiffin said in answer to a question that players don't ask him about speculation he'll leave for another job.

"They know how we do things here," Kiffin said. "The pro mindset of preparing each day to get better and win."

Kiffin said that on Monday, but he met with the players on Tuesday to tell them he hasn't been offered another job, according to a report by ESPN.com's Chris Low.

"Kiffin as a rule doesn't respond to coaching rumors, but sources told ESPN that he felt as if he owed it to his players and their parents to formally address the situation," Low wrote, after WCBI-TV in Columbus, Miss., reported Kiffin would resign after the Mississippi State game and take the Auburn job.

"He told the players his focus was on Mississippi State and nothing else and that any reports out there about his accepting another offer were totally false," Low wrote, citing sources.

Tennessee is a 13 1/2-point favorite for its game at Vanderbilt on Saturday, but ESPN analyst Kirk Herbstreit said he's going with the Commodores.

"Give me Vandy," Herbstreit said to host Rece Davis Tuesday night when the latest College Football Playoff rankings were released on ESPN. "I'm claiming Vandy right now, before you are even going to get close to that, Rece."

Davis wanted to know if Herbstreit meant he was taking Vanderbilt and the points or picking the Commodores to win.

While it's a bold prediction, there is some logic to it.

Vanderbilt (5-6) stopped its SEC losing streak with a 24-21 victory at Kentucky and then beat Florida 31-24 at home last week.

Tennessee (9–2) is coming off a 63-38 loss at South Carolina in which starting quarterback Hendon Herndon suffered a season-ending knee injury,

The loss dropped the Vols from No. 5 to No. 10 in the poll and ended any hope of being included in the playoffs while Vanderbilt has the motivation of playing for bowl eligibility.

But maybe Herbstreit, a former Ohio State quarterback who lives in Nashville, Tenn., just wanted to support the hometown team.

Arkansas' 42-27 victory over Ole Miss was the first SEC game and second involving FBS teams to have three players who rushed for 200 or more yards according to AL.com.

The first FBS game with three players who rushed for 200 or more yards was Middle Tennessee's 77-56 victory over Florida Atlantic on Nov. 26, 2016, AL.com reported.

In that game MTSU got 213 rushing yards from I'Tavius Mathers and 207 from Richie James and FAU's Devin Singletary ran for 235.

If No. 1 Georgia (11-0) beats Georgia Tech on Saturday in Sanford Stadium, the Bulldogs will finish the regular season undefeated for the sixth time and second consecutive year.

Steve Spurrier's teams went 14-10 against Tennessee when he coached at Duke, Florida and South Carolina, and he's known for needling the Vols.

After South Carolina beat Tennessee 63-38 last week, Gene Sapakoff of the Charleston Post and Courier, reached out to get Spurrier's reaction.

"I almost felt sorry for Tennessee," said Spurrier, who is 77 and works as an ambassador for the Florida athletic department. "Someone told me Tennessee is probably headed for the Citrus Bowl now. I guess that's kind of a mean thing to say."

The Vols played in the Citrus Bowl three times in a four-year span from 1993-96 when Tennessee finished second to Florida in the SEC East each year.

"You can't spell Citrus without U-T," Spurrier used to quip.

Forbes' 79-yard return was his third touchdown of the season. He also scored on returns against Kentucky (59 yards) and Texas A&M (33 yards).

Forbes tied a Mississippi State record with his sixth interception this season. His 14 career interceptions are two shy of the school record of 16 shared by Walt Harris (1992-95) and Johnathan Banks (2009-12).

Tennessee senior quarterback Hendon Hooker has played his last game for the Vols.

Hooker tore the anterior cruciate ligament in his left knee at South Carolina and is done for the season. He wasn't hit on the play, but as he rolled out his foot appeared to get stuck in the turf as he lost the ball and went down and had to be helped off the field.

A transfer from Virginia Tech, Hooker became a starter for the Vols last year and this season led them back to national prominence, including victories over Alabama and LSU.

Hooker passed for 3,135 yards and 27 touchdowns this season with 2 interceptions and rushed for 430 yards and 5 touchdowns.

"He's got an unbelievable legacy that he's built here, and he's built it along with his teammates," Vol Coach Josh Heupel said Monday at his weekly news conference. "He's been a huge part of setting some solid cornerstone pieces to what this program is and what it's going to be in the future."

Heupel said Hooker deserves to be a finalist for the Heisman Trophy.

"Nobody [was] playing at a higher [level] ... and you can see that with the way we've played and the numbers he's put up," Heupel said.

Last season Hooker passed for 2,945 yards and 31 touchdowns with 3 interceptions and rushed for 616 yards and 5 touchdowns.

Joe Milton, a transfer from Michigan who was Tennessee's starting quarterback to open last season before Hooker took over, will start at Vanderbilt on Saturday

Stoops has signed an amended contract that will boost his annual salary from $6.35 million to $8.6 million and extend the deal from 2028 to 2031.

The Wildcats, ranked as high as No. 7 this season after a 4-0 start, are 6-5 going into Saturday's game against Louisville, but Stoops has the record for victories for a Kentucky coach and a 65-58 overall mark in his 10th season.

It's been an impressive run for Stoops considering the Wildcats were 2-10 in 2012 the season before he was hired.

Kentucky has won as many as 10 games four times since Bear Bryant led the Wildcats to an 11-1 record in 1950.

Alabama has a 290-54-3 record at Bryant-Denny Stadium, but Auburn has a winning record in the Crimson Tide's home at 7-6.

The Tide have won five in row at home over the Tigers going into Saturday's 87th Iron Bowl and lead the overall series 48-37-1.

It had been an underwhelming season for South Carolina junior quarterback Spencer Rattler -- a transfer from Oklahoma -- until he set a Gamecocks' record with six touchdown passes against Tennessee.

Rattler came into the game with eight touchdown passes on the season, but he broke the record of five in a game first set by Tommy Suggs in South Carolina's 49-28 victory over Virginia in 1968.

Others to have matched Suggs' record with five touchdown passes are Jeff Grantz (vs. Clemson in 1975), Steve Tanneyhill (vs. Louisiana Tech and Vanderbilt in 1995), Sevelle Newton (vs. Florida Atlantic in 2006), Dylan Thompson (vs. Auburn in 2014) and Jake Bentley (vs. Clemson in 2018).

Rattler completed 30 of 37 passes for 438 yards against the Vols without an interception.

Gibbs, a transfer from Georgia Tech, has been an impact newcomer for the Crimson Tide and will look to continue his impressive season against Auburn on Saturday in his first Iron Bowl.

Along with rushing 119 times for 774 yards and 6 touchdowns, Gibbs has a team-high 40 receptions for 370 yards and 3 touchdowns.

Gibbs' three-year totals with Georgia Tech and Alabama are 351 carries for 1,980 yards and 14 touchdowns and 99 receptions for 1,138 yards and 8 touchdowns.

The Egg Bowl is an underrated rivalry when it comes to two programs and fan bases that basically hate each other.

Ole Miss Coach Lane Kiffin is looking to improve to 3-0 against Mississippi State, but a bigger storyline is whether this will be his last game as the Rebels' coach before he takes the Auburn job?

It should be a high-scoring, wild, close game with Kiffin and Leach being two of the nation's top play-callers.

Florida at No. 16 Florida State

Georgia Tech at No. 1 Georgia

South Carolina at No. 8 Clemson

Auburn at No. 7 Alabama

No. 10 Tennessee at Vanderbilt

27 -- Shutouts by Alabama, with a 34-0 victory over Austin Peay, since 2007 when Nick Saban became the Crimson Tide's coach.

63 -- Points South Carolina scored against Tennessee, the most ever for the Gamecocks' against a top-5 team. The previous high was 35 points in multiple games.

"Hopefully we can, like, I don't know if this is bad, but piss in their cornflakes. That's what we want to do."

"Seems like there's not a lot of love in the relationship, I guess, is a nice way of putting it."

-- Ole Miss Coach Lane Kiffin on how the Rebels and Mississippi State Bulldogs feel about each other.

"I told them last week that we're going to do more of these celebrations. They responded."

-- Vanderbilt Coach Clark Lea after the Commodores beat Florida 31-24 for back-to-back victories after winning at Kentucky 24-21 the previous week. 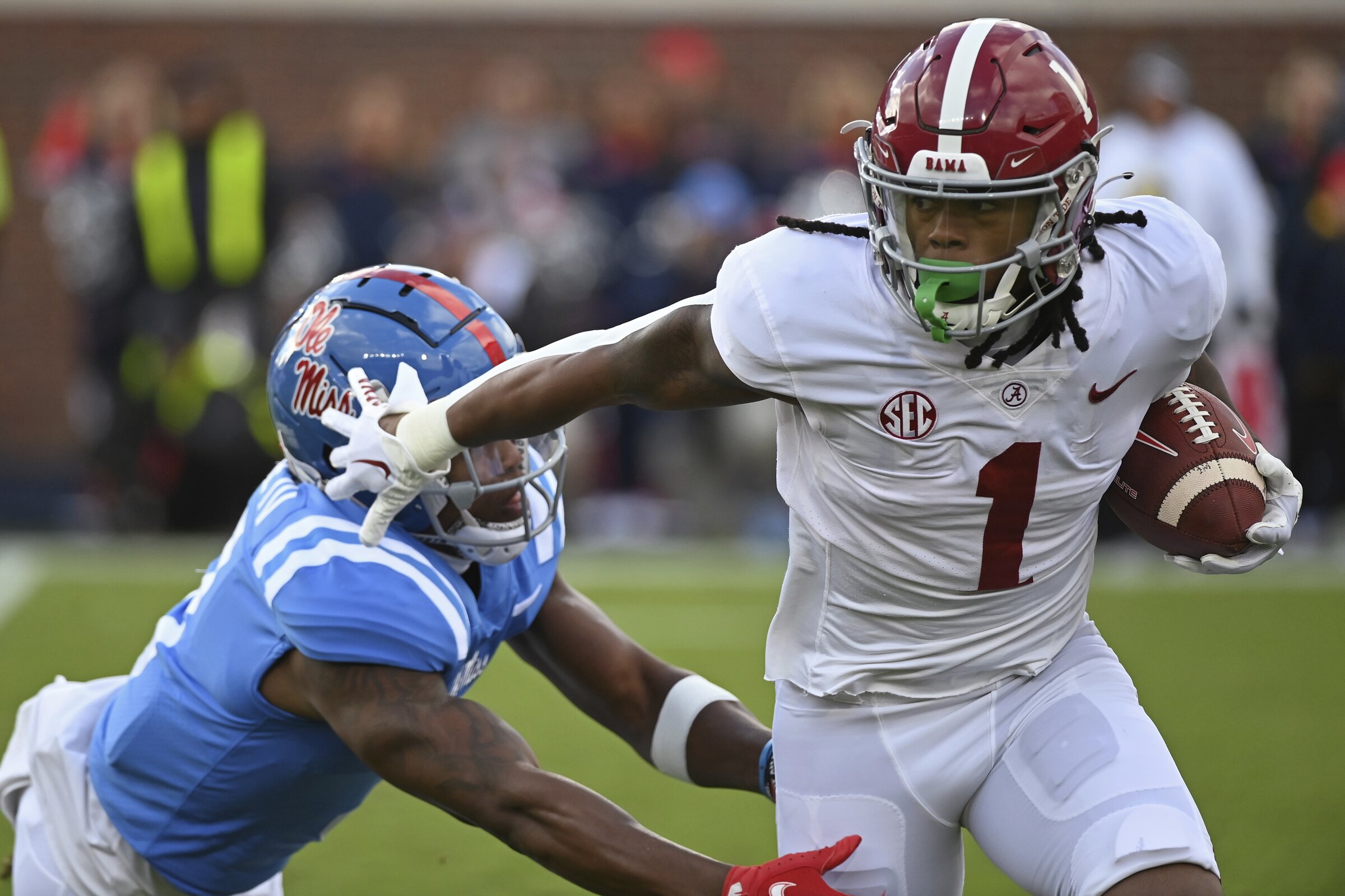 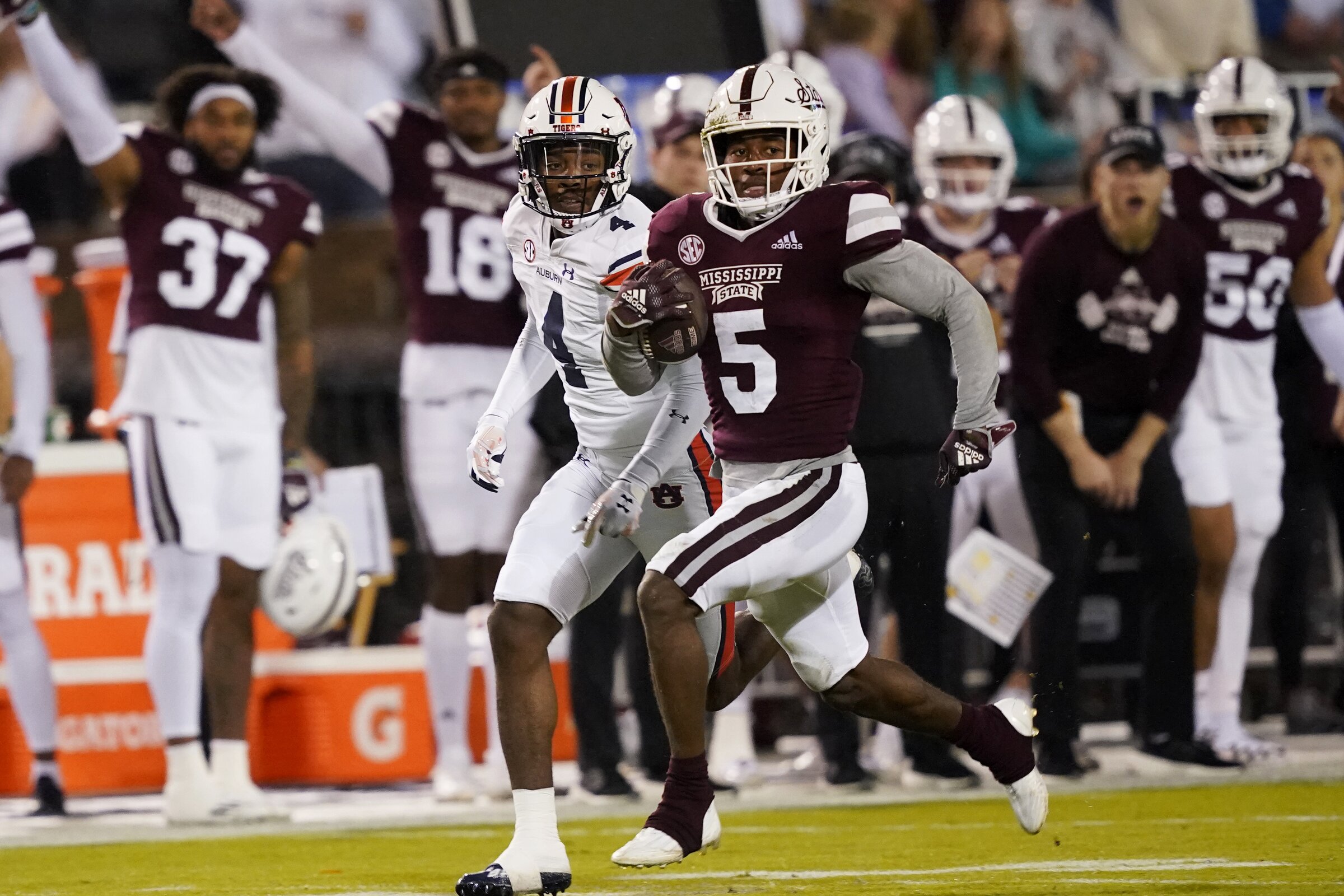 Print Headline: Kiffin: Not No. 1 guy at Auburn