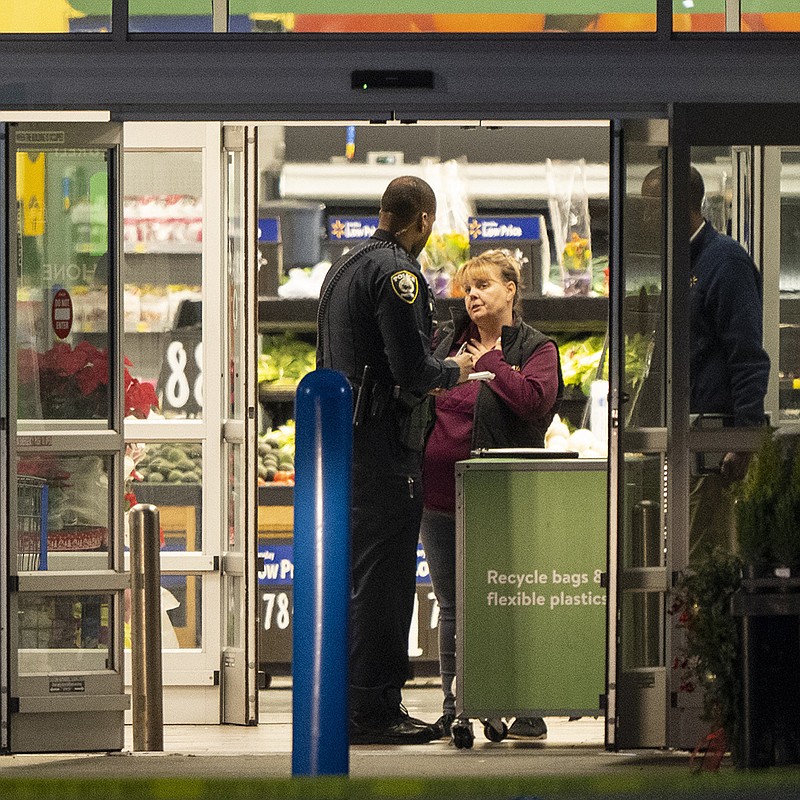 A Walmart employee speaks with law enforcement officials Wednesday as they investigate the mass shooting at a Walmart in Chesapeake, Va. More photos at arkansasonline.com/1124chesapeake/. (AP/Alex Brandon)

CHESAPEAKE, Va. -- A Walmart manager pulled out a handgun before an employee meeting and began firing wildly around the break room of a Virginia store, killing six people in the nation's second high-profile mass shooting in four days, police and witnesses said Wednesday.

The gunman was dead when officers arrived late Tuesday at the store in Chesapeake, Virginia's second-largest city. Authorities said he apparently shot himself. Police were trying to determine a motive. One employee described watching "bodies drop" as the assailant fired haphazardly, without saying a word.

"He was just shooting all throughout the room. It didn't matter who he hit. He didn't say anything. He didn't look at anybody in any specific type of way," said Briana Tyler, a Walmart employee.

Six people were wounded in the shooting, which happened just after 10 p.m. as shoppers were stocking up ahead of the Thanksgiving holiday. Police said they believe about 50 people were in the store at the time.

The gunman was identified as Andre Bing, 31, an overnight team leader who had been a Walmart employee since 2010. Police said he had one handgun and several magazines of ammunition.

Tyler said the overnight stocking team of 15 to 20 people had just gathered in the break room to go over the morning plan. She said the meeting was about to start, and one team leader said: "All right guys, we have a light night ahead of us." Then Bing turned around and opened fire on the staff.

At first, Tyler doubted the shooting was real, thinking that it was an active shooter drill.

"It was all happening so fast," she said, adding: "It is by the grace of God that a bullet missed me. I saw the smoke leaving the gun, and I literally watched bodies drop. It was crazy."

Police said three of the dead, including Bing, were found in the break room. One of the slain victims was found near the front of the store. Three others were taken to hospitals where they died.

Tyler, who started working at Walmart two months ago and had worked with Bing just a night earlier, said she never had a negative encounter with him, but others told her he was "the manager to look out for." She said Bing had a history of writing people up for no reason.

"He just liked to pick, honestly. I think he just looked for little things ... because he had the authority. That's just the type of person that he was. That's what a lot of people said about him," she said.

Employee Jessie Wilczewski told Norfolk television station WAVY that she hid under the table, and Bing looked and pointed his gun at her. He told her to go home, and she left.

Police said the dead included a 16-year-old boy whose name was being withheld because of his age. The other victims were identified as Brian Pendleton, 38; Kellie Pyle, 52; Lorenzo Gamble, 43; and Randy Blevins, 70, who were all from Chesapeake; and Tyneka Johnson, 38, of nearby Portsmouth.

It was not immediately clear whether they were workers or shoppers.

Local hospitals said they were treating five people, including two in critical condition. Two of the slain victims died at one of the hospitals, according to officials.

Chief Mark Solesky of the Chesapeake Police Department said the gunman was believed to have acted alone. "We have reason to believe that there's no risk to the public at this time," he said. He added that he had no indication that the gunman was known to police before the shooting. "There is no clear motive at this time."

A SWAT team has executed a search warrant at the gunman's home, Solesky said. He said the FBI was also involved with the investigation and helping to process the scene.

Donya Prioleau was in the store's break room when the gunman, whom she identified as the manager in a Facebook post, walked in and shot three of her colleagues. Like Prioleau, many Walmart employees who were at the store when the shooting unfolded belonged to the overnight stocking team, she said.

"We're really good friends," Prioleau told The Washington Post in a phone interview. "We're family because you spend most of the night together. What happened last night was awful to see."

"I cannot unsee what happened in that breakroom," Prioleau, who was not injured, wrote in a Facebook post.

"None of us deserve to witness that," she said, adding, "I just watched three of my friends killed in front of me."

Jeromy Basham, a manager at a solar company, was at the store gathering supplies ahead of a Thanksgiving luncheon for his employees. He was in the middle of deciding which tablecloths to get when he first heard the shots.

At first he thought an employee might have accidentally knocked over metal shelving with a forklift.

He and others around him ran to a nearby emergency door that led them to the parking lot. Some sought shelter behind big shipping containers. Basham and others hid behind some trees and metal racks in front of the building.

From there, he saw police rushing into the store with helmets and guns drawn. Soon after, authorities started to bring out those who were shot.

Basham spotted one body lying on the ground near a disabled parking space across from the main door as a person administered CPR. He said he saw another body being wheeled out in a shopping cart by two people. A third body was taken past him on a stretcher. "None of them moved," Basham said. People wailed and cried around him.

If he had not taken so much time choosing a tablecloth for his company's Thanksgiving lunch, he probably would have been in the grocery section where the shooting began, he said.

"It could have been me shot," Basham said Wednesday morning. "I haven't slept really since it happened. All of it has just been hitting me. A friend asked me if I was OK this morning, and I thought I was until I heard that question, and I'm not."

The attack was the second time in a little more than a week that Virginia has experienced a major shooting. Three University of Virginia football players were fatally shot on a charter bus as they returned to campus from a field trip on Nov. 13. Two other students were wounded.

The assault at the Walmart came days after a person opened fire at a gay nightclub in Colorado Springs, killing five people and wounding 17. Last spring, the country was shaken by the deaths of 21 when a gunman stormed an elementary school in Uvalde, Texas.

Tuesday night's shooting also brought back memories of another attack at a Walmart in 2019, when a gunman who targeted Mexicans opened fire at a store in El Paso, Texas, and killed 22 people.

A database run by The Associated Press, USA Today and Northeastern University that tracks every mass killing in America going back to 2006 shows that the U.S. has now had 40 mass killings so far in 2022. That compares with 45 for all of 2019, the highest year in the database, which defines a mass killing as at least four people killed, not including the killer.

According to the database, more than a quarter of the mass killings have occurred since Oct. 21, spanning eight states and claiming 51 lives. Nine of those 11 incidents were shootings.

Notably, the database does not include the recent shooting at the University of Virginia because that attack did not meet the threshold of four dead, not including the shooter.

President Joe Biden tweeted that he and the first lady were grieving for the victims' families. "We mourn for those who will have empty seats at their Thanksgiving table because of these tragic events -- we must take greater action."

Kimberly Shupe, mother of Walmart employee Jalon Jones, told reporters her 24-year-old son was shot in the back. She said he was in good condition and talking Wednesday, after initially being placed on a ventilator.

Shupe said she learned of the shooting from a friend, who went to a family reunification center to find out Jones' whereabouts.

"If he's not answering his phone, he's not answering text messages and there's a shooting at his job, you just kind of put two and two together," Shupe said. "It was shock at first, but ultimately, I just kept thinking, he's going to be all right."

Walmart said in a statement that it was working with law enforcement.

"While details of the tragic incident in our Chesapeake, Virginia store are still emerging, authorities have confirmed multiple fatalities," Walmart's statement read. "We are focused on doing everything we can to support our associates and their families at this time."

.In the aftermath of the El Paso shooting, the company made a decision in September 2019 to discontinue sales of certain kinds of ammunition and asked that customers no longer openly carry firearms in stores.

It stopped selling handgun ammunition as well as short-barrel rifle ammunition, such as the .223-caliber and 5.56-caliber used in military style weapons.

The company stopped selling handguns in the mid-1990s in every state but Alaska, where sales continued until 2019. The changes marked a complete exit from that business and allowed Walmart to focus on hunting rifles and related ammunition only.

Many of its stores are in rural areas where hunters depend on Walmart to get their equipment.

Tyler's grandfather, Richard Tate, said he dropped his granddaughter off for her 10 p.m. shift, then parked the car and went in to buy some dish soap.

When he first heard the shots, he thought it could be balloons popping. But he soon saw other customers and employees fleeing, and he ran too.

Tate reached his car and called his granddaughter. 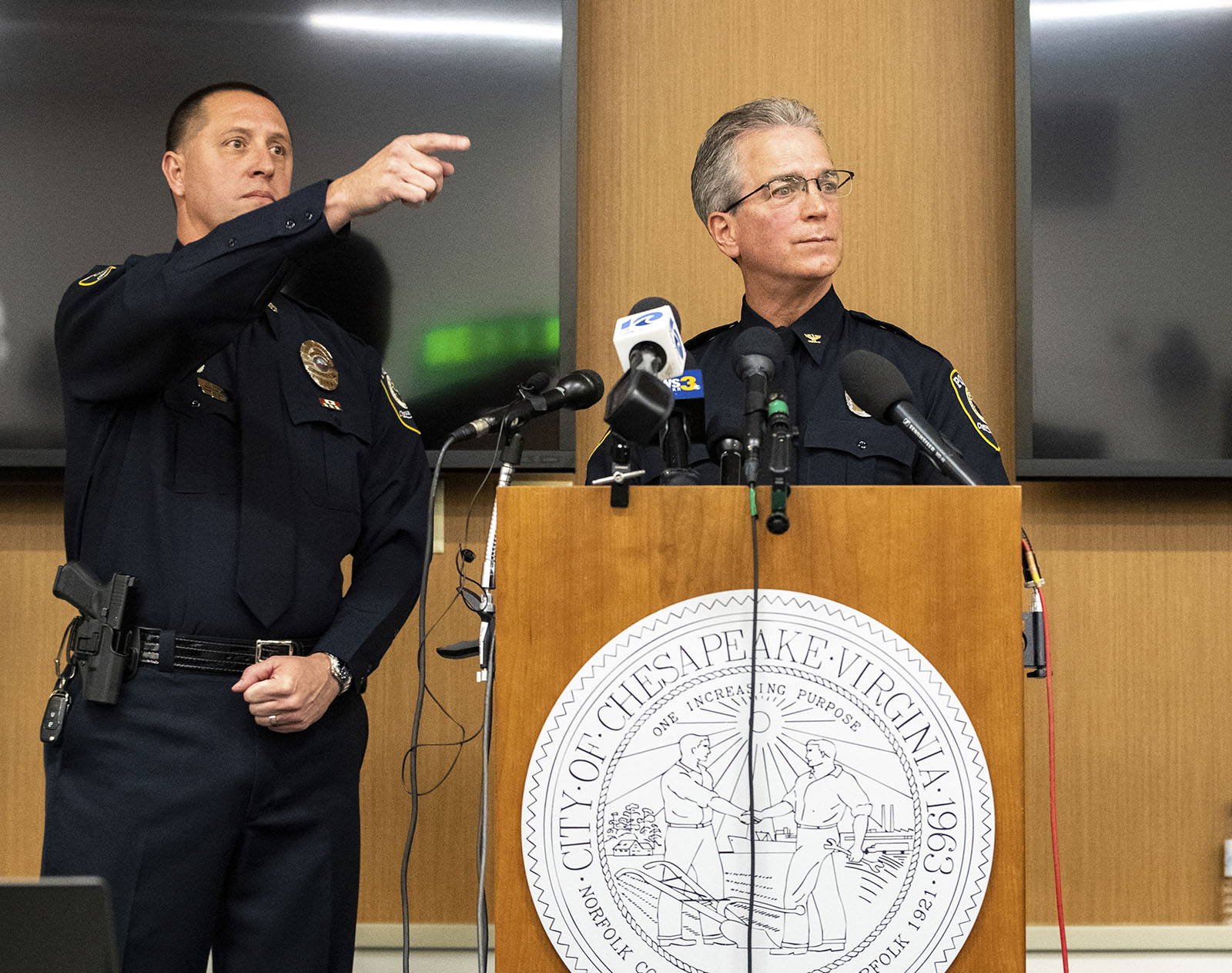 Chesapeake Police Chief Mark Solesky (right) said at a briefing Wednesday that there was no clear motive for the deadly Walmart shooting and that the gunman, identified as Andre Bing, was not known to the police previously. (AP/The Virginian-Pilot/Mike Caudill)