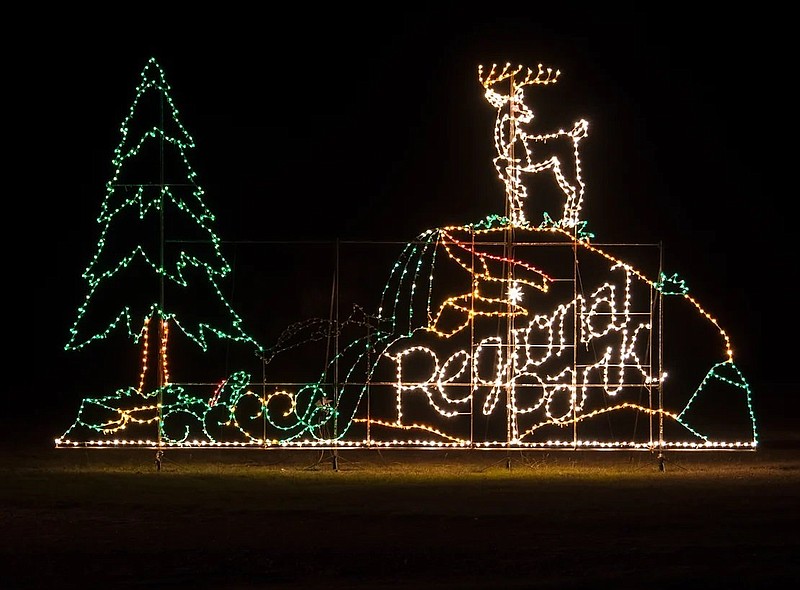 The Enchanted Land of Lights & Legends at Regional Park, shown in this file photo, will feature some 260 holiday light displays. (Special to The Commercial/ExplorePineBluff.com)

The one thing the Enchanted Land of Lights & Legends needs to get going is the one thing it doesn't have: electricity.

The 1.3-mile holiday light drive-thru in Regional Park was set to open on Tuesday, but renovations to the electrical circuitry in the area aren't quite ready for prime time, said Kerry Battles, executive director of the Pine Bluff Festival Association. Now the opening date is a hoped-for Monday.

"We were dealing with a total reconstruction of the electrical infrastructure in that area," Battles said. "It just was not completed in time so we ultimately had to postpone the start. We did not have the ability to plug anything up at this time. So I had to make the call to postpone the opening."

The numerous electrical boxes and outlets that line the road where the holiday lights are located were damaged by flood water in 2019. The repair work has included putting the boxes on taller stands so there's less chance of a repeat, Battles said.

At this point in the process, city officials are waiting on Entergy to look over the work that's been done and then restore power. Setting up a time for the electric provider can take days, Battles said, and is complicated by the Thanksgiving holiday when most people are off for one or more days.

"All fingers and toes crossed, we will be open next Monday," Battles said.

This year's exhibit includes about 260 displays, and will be the first year since 2019 that covid has not been a factor. The drive-thru is said to be the largest of its kind in the state, and attracts visitors in cars and tour buses from far outside Pine Bluff.

Driving through the park is free, although visitors are encouraged to make a donation at the end.

Battles said his workers 'jazzed up a few" of the exhibits this year, including the city of Pine Bluff's, which now sports LED lights.

"That's going to be nice," he said. "Well, I say it's going to look nice. We'll have to add some electricity to see exactly how nice it does look."