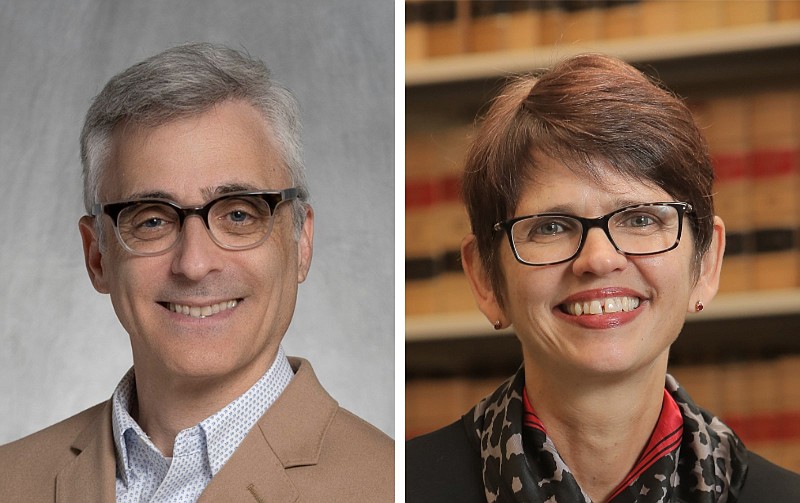 A University of Arkansas at Little Rock law professor's claim that he was improperly denied a named professorship despite being the best-qualified faculty member for the position has taken another step toward being considered by the five members of the Arkansas State Claims Commission.

The university and counsel can now refile the motion to dismiss in response to the revised complaint, admit liability, or move on to allowing the commissioners to review all documents from both sides.

The commissioners can then, based on evidence, either dismiss the complaint or set it for a hearing, where both parties would argue their case, similar to a civil court case, and the commissioners would ultimately rule in favor of one side or the other, according to the Claims Commission. The next hearing docket -- and last of this calendar year -- is Dec. 15-16.

Steinbuch said that his failure to receive the Arkansas Bar Foundation Professorship -- which comes with a $10,250 stipend annually for four years -- was "at least an abuse of discretion" by Dean Theresa Beiner of the University of Arkansas at Little Rock William H. Bowen School of Law. He seeks an award of $10,250, payment for his attorney fees, and "all other just and proper relief."

The complaint was first filed with the Claims Commission in September, but Mindy Pipkin, associate general counsel for UALR, filed a motion to dismiss the claim earlier this month. Steinbuch and Corbitt filed a response to that motion to dismiss Monday, as well as the revised complaint.

The motion to dismiss calls Steinbuch's claim "insufficient" and states that "administrative decisions of state agencies are not reviewable."

"Additionally, the Commission does not have the jurisdictional authority to make an award for a claim or action that a court would dismiss as a matter of law, [so] this Commission should adhere to its jurisdictional limitations and reject Steinbuch's request," according to the motion to dismiss. No employment contract "entitling Steinbuch to a discretionary named professorship" exists, either.

Beiner, who originally joined the Bowen School of Law in 1994 and became dean in 2018, "did not employ the required donor selection criteria for the position, and improperly adopted a series of her own created substantive criteria, including arbitrarily limiting the time period of accomplishments considered to five years, which obviously benefits candidates without a long history of accomplishments," according to Steinbuch's initial claim.

"Named Professorships are designed to reflect a career of accomplishments, which inevitably includes recent years, but are not designed to only consider recent accomplishments at the expense of also considering" the full records of candidates.

"Beiner filled the one Named Professorship she advertised with an applicant," Lindsey Gustafson -- who has been a member of the faculty since 1998 and was appointed Associate Dean for Academic Affairs in 2020 -- "who at minimum demonstrably and significantly didn't fulfill the requirements of the Arkansas Bar Foundation Professorship as well as Steinbuch did, if she [did] at all, which does not appear the case," according to the claim. "Had the rules been properly applied, Steinbuch would have received the Named Professorship and the accompanying $10,250, which he seeks in damages."

"The core of the complaint, really, is breach of contract," Steinbuch said Tuesday. "I have an employment manual," which includes the rules for named professorships and standards for them, "and there are very specific requirements for the Arkansas Bar Foundation Professorship, but the dean clearly violated those rules" in this case.

In his application for the Arkansas Bar Foundation Professorship -- which emphasizes excellence in teaching and in scholarship in Arkansas law, as well as "significant contributions to serving the Bench and Bar of Arkansas" -- Steinbuch cited qualifications such as receiving the Faculty Excellence Award in Public Service, being the only Fulbright Scholar in teaching on the faculty, routinely advising on and drafting legislation for state legislators, and litigating public-interest lawsuits for free as a practicing attorney in Arkansas.

"I've published numerous things on Arkansas law, and I'm the sole author of the definitive treatise on the [state Freedom of Information Act], which has been cited by the Arkansas Supreme Court in virtually every FOIA case," he said. "I've done continuing education on FOIA and other legal issues, and I routinely appear in court to clarify the law."

Steinbuch, who joined the law school faculty in 2005, also claims Beiner -- who announced earlier this fall she will step down from the dean role effective July 1, 2023, and return to a faculty position -- unilaterally extended the named professorship she holds, the Nadine Baum Distinguished Professor of Law, for a fifth year.

Named professorships in the law school are four-year terms for the holders, although the dean can extend them beyond four years if "development activities generate sufficient additional Named Professorships," or if specific terms of a donor in creating a named professorship differ, according to the complaint.

"It's remarkably striking to me that the university seems unfazed by the dean unilaterally extending the term of her own named professorship," given the "conflict of interest," Steinbuch said. "She can't do that for anybody, [least of all] herself."

Carrie Phillips, UALR's chief communications and marketing officer, said Tuesday the university would offer no further comments at this time, noting "we are unable to comment on pending litigation."

Also in his filing, Steinbuch said he's being discriminated against because of his past conflicts with his superiors regarding naming a named professorship after former President Bill Clinton, as well as Steinbuch's longstanding practice of having guest lecturers for his classes when he observes Jewish holidays.

Though the motion to dismiss paints Steinbuch as "a serial complainer," he's been "a serial winner on his complaints against Beiner" in the two aforementioned matters, as Beiner was "twice reversed for her improper conduct" -- by UALR Chancellor Christina Drale in the President Clinton named professorship case, and by a university panel in the guest lecturers on Jewish holidays case -- after Steinbuch complained, according to the response to the motion to dismiss.

The motion to dismiss states that the Claims Commission should strike sections of the complaint about the Clinton professorship renaming and Steinbuch's use of guest speakers on Jewish holidays, because they "have no bearing on the present claim."

"Motive is always relevant," he said. "I have exposed the dean's wrongdoing, and then I wasn't given this named professorship."

The response to the motion to dismiss also asserts that Beiner does not have "unfettered discretion" in awarding named professorships, but, rather, that "she's bound by the rules for the awarding of the Named Professorship."

In their motion to dismiss, "they say the dean has 'discretion,' but that discretion was abused," Steinbuch said.