PREP FOOTBALL: Robinson RB glad to be back 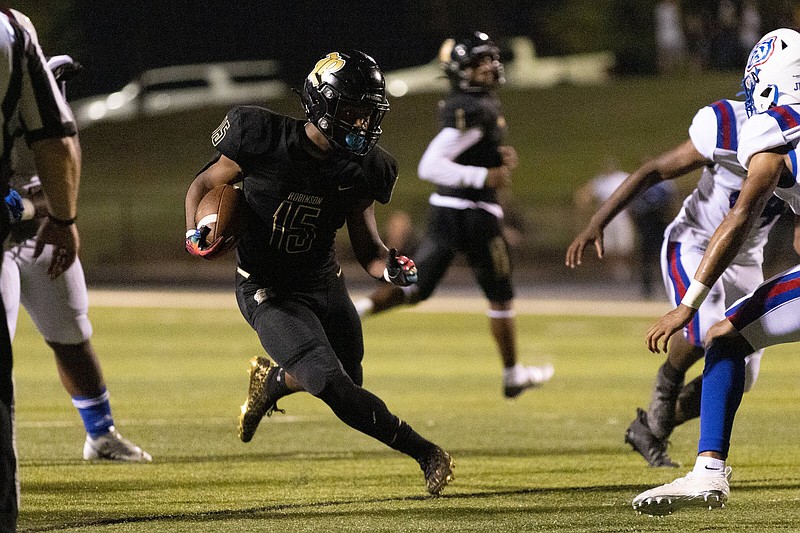 Joe T. Robinson running back Noah Freeman was given a timetable of four to six weeks to return to the field after breaking a bone in his leg in the Senators’ Oct. 7 victory over Maumelle, but Freeman said he wanted to get back as soon as possible. “I was really determined to come back within the four weeks because I didn’t want to sit out for six,” Freeman said. “So I just drank a lot of milk, ate some protein and got back out there.” (Democrat-Gazette file photo)

The Joe T. Robinson senior was nearing four weeks of recovery from a broken left fibula and the state playoffs were fast approaching.

Freeman initially "tweaked" his leg in an Oct. 7 win over Maumelle. The following Tuesday at practice he felt a pop and was told soon after that he had broken a bone.

The initial timetable doctors gave Freeman was four to six weeks, but with it being his senior season and the Senators vying for a state title, Freeman had to get back as soon as possible.

"I was really determined to come back within the four weeks because I didn't want to sit out for six. So I just drank a lot of milk, ate some protein and got back out there," Freeman said.

Freeman rejoined practice ahead of Robinson's No. 4 game against Pine Bluff. He wasn't featured in that game but returned a week later in Robinson's playoff opener against Magnolia.

Freeman rushed four times for 11 yards while on a workload restriction from Coach Todd Eskola.

Last week against Batesville, Freeman started to look like his old self. He carried 11 times for 130 yards and 1 touchdown.

"[I'm] feeling like my old self again," Freeman said. "The cuts felt amazing. Running felt amazing. I feel faster than I was before. It felt great. I'm just happy to be back."

Freeman wasn't the lone absence from Robinson's roster during that time. In fact, he wasn't even the only running back injured.

The Senators' top four running backs all went down with injuries at some point this season. In Robinson's Oct. 21 win over Mills, all four were out, leaving fifth-string Malik Okuneye and wide receiver Brandon Greil to fill in.

Greil, an Arkansas State University commitment, has provided a spark as a Wildcat quarterback for Robinson, particularly in the Mills game. He rushed for 81 yards and a touchdown to lead the Senators to a 29-28 conference-clinching win.

"When I got hurt, Coach Eskola told the players, somebody has to step up," Freeman said. "I feel like [Greil] really stepped up in my absence. He's put the team on his back at times. BG is a great athlete, probably the best athlete in the state and definitely the best athlete on our team. He just stepped up and I'm proud of him. Every time I tell him that I'm proud of him."

Now with Freeman back to full health, No. 1 seed Robinson hosts fellow No. 1 seed Little Rock Parkview with a spot in the Class 5A state title game on the line.

It will be the first meeting between the schools with both rounding out their first year in 5A.

Robinson spent last season in Class 4A, winning the state title on the way out. Parkview's enrollment number bumped it down from Class 6A where it went 10-3 in 2021.

A game against Parkview is one Freeman said he's been hoping to have for years.

"I'm very excited," Freeman said. "It's a game that me and my friends talked about when we were back in ninth grade. We always want to play Parkview. We got it this year. ... So I'm excited. We just need to go out there with our heads screwed on right, don't let the atmosphere get to us and I think we'll win."

Pulaski Academy has been fortunate to not have to deal with too many injuries this season. But the ones that the Bruins have had to face have been to crucial players at crucial positions.

Linebacker Hunt Harrison has played with a cast on his left forearm and hand to protect a broken bone in his wrist for nearly the entire season.

Sophomore backup Brandon Cobb has stepped in and passed for 1,182 yards and 11 touchdowns in his place.

This Friday, in a Class 6A semifinal against Little Rock Catholic, the Bruins are fully healthy and aiming to advance to the title game in their first year in the classification.

Pocahontas' season came to an end last week. And with it came the final game of one of the most storied individual careers in state history.

Quarterback Connor Baker finished his career as the state's all-time leader in rushing touchdowns with 100. His 6,156 rushing yards are the seventh-most in state history.

Pocahontas lost 49-7 to Joe T. Robinson, the No. 3-ranked team in Class 5A, last Friday in Little Rock.

While Connor Baker ended his season atop the state record books, East Poinsett County's Dennis Gaines is still playing to place his name atop a pair of lists.

Gaines has rushed for 3,034 yards and 43 touchdowns thus far for the Warriors. Neither of those would set a state record, but if Gaines maintains his pace, he'll hold the records for both in a single season.

Craig Jackson set the single-season state record for rushing touchdowns with 45 for Carlisle in 1995.

Cecil Langston holds the record for rushing yards in a season. He rushed for 3,211 yards in 2015 for Rivercrest.

East Poinsett plays at Hazen on Friday night in the Class 2A semifinals.

Print Headline: Robinson RB glad to be back