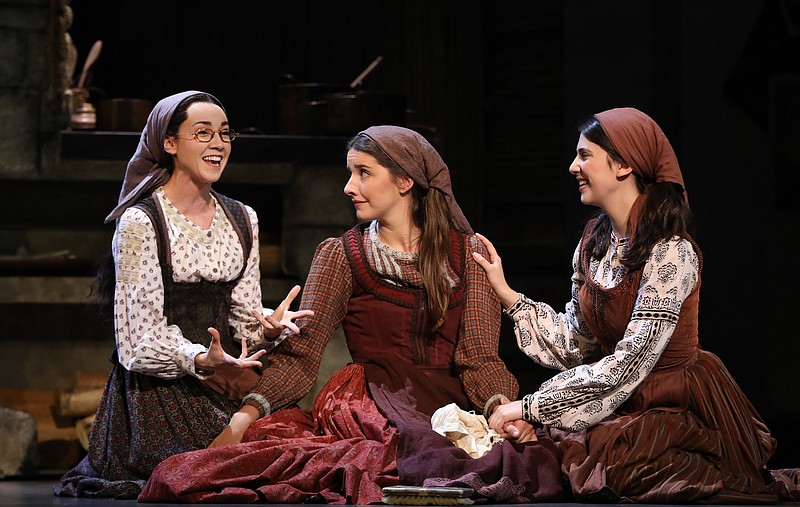 Tevye's three eldest daughters — (played, on an earlier leg of the tour, from left, by Natalie Anne Powers, Mel Weyn and Ruthy Froch) speculate on the type of husbands the matchmaker will find them in "Matchmaker, Matchmaker." The current touring production puts an extra emphasis on just how scary that prospect might end up. (Photo by Joan Marcus)

EDITOR'S NOTE: The national tour of "Fiddler on the Roof" originally was to have been onstage at Little Rock's Robinson Center in January; an outbreak of covid-19 in the cast forced the postponement of those shows until this weekend. This story originally ran online in January.

As with its resilient characters, the national tour of "Fiddler on the Roof" bends with adversity but doesn't break.

After a pandemic-induced interruption, the tour's third season got underway in September 2021.

Maite Uzal, who plays Golde, wife of Tevye the Dairyman, the show's central character, has been with the tour since Day 1, a total (as of mid-December, when the tour was stopping for a week in Columbus, Ohio) 550 performances.

There's been some turnover in the cast — "new actors came on between season 1 and season 2, and again prior to the third season," she says. "It's always good to work with new people, as well as continue to develop relationships. It's all good." 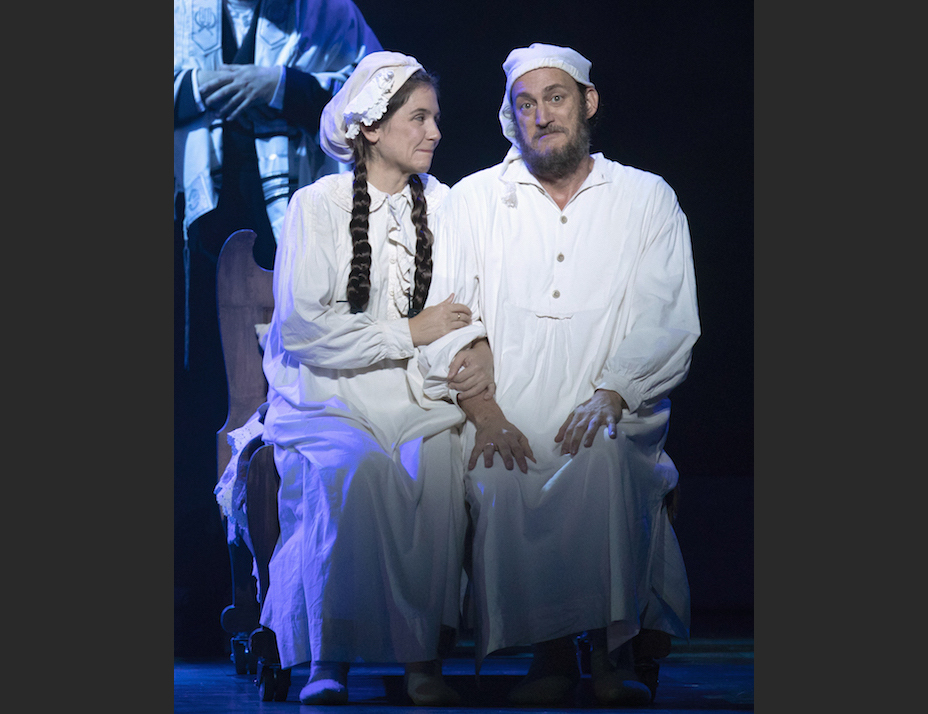 Maite Uzal as Golde and Yehezkel Lazarov as Tevye "confront" the issue of who will marry their daughter Tzeitel — Lazar Wolf the butcher or Motel the tailor. (Photo by Joan Marcus)  The tour is currently a mix of full-week visits, two-week visits, weekend stopovers (including the one this weekend at Little Rock's Robinson Center Performance Hall, where it will take the stage Friday, twice on Saturday and once on Sunday) and even some one- and two-nighters.

At each venue, Uzal explains, the crew loads in, usually overnight; a company meeting in the morning goes over any necessary cuts — set pieces that don't fit, whether any costume changes need to be adjusted, whether there are spacing issues for dancers and actors.

Uzal credits major changes to the show itself to the work of Israeli choreographer Hofesh Shechter, whom she praises as applying "a new pair of eyes" to the choreography by the legendary Jerome Robbins that most productions have followed since its Broadway debut in 1964.

Uzal calls particular attention to the staging and presentation of one number in particular.

"For those who are really, really familiar with the show, what stands out is 'Matchmaker,'" she says. This production, she explains, "has shifted more focus onto the text. Rather than reveling on being a young, excited girl," dreaming of a handsome husband, "they realize that they'll soon be married to a person they haven't chosen." That gives a new, real force to the lyrics, "Up to this minute I misunderstood that I could get stuck for good" and "It's not that I'm sentimental — it's just that I'm terrified." 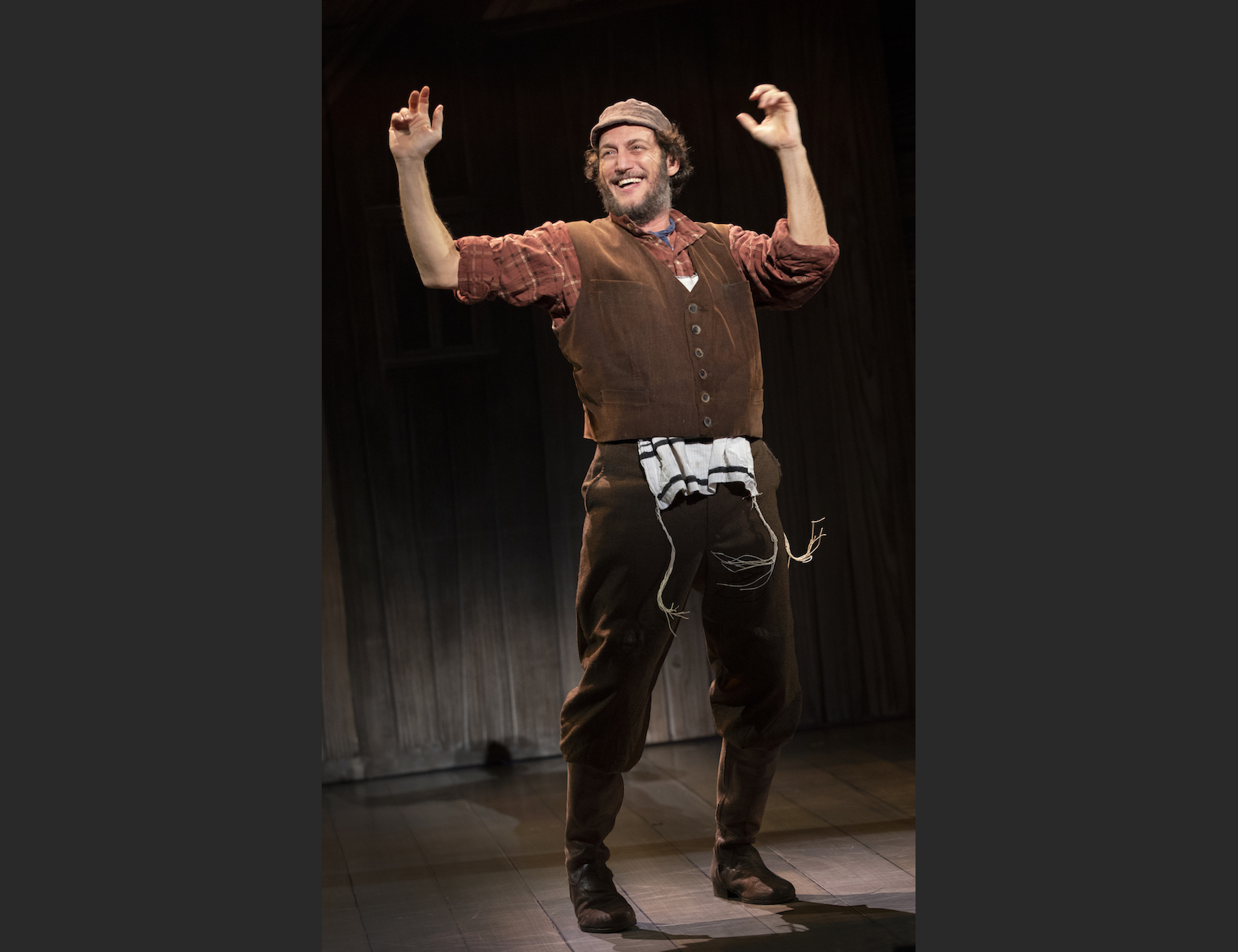 Yehezkel Lazarov plays Tevye in the national tour production of “Fiddler on the Roof.” (Photo by Joan Marcus)  "The swing of the waltz is so beautiful, and you want to sway along," she adds, "but if you dig into the lyrics, you understand the reality of an arranged marriage. Hopefully without losing all the other wonderful things about the song."

Though it might not be entirely obvious in her short program biography, the Hispanic actress has a strong background in musical theater: She graduated from the Musical Theatre Conservatory Program at the American Musical and Dramatic Academy in New York City, and among other credits has five productions of "In the Heights" under her belt (playing, variously, Camila, Daniela and Abuela Claudia).

Also, "I've done lots of classical theater," including among her New York credits understudying the role of Linda Loman in "Death of a Salesman" and as Marina, understudying Mrs. Voynitskaya, in "Uncle Vanya."

In "Fiddler," Golde gets a couple of "focus" numbers — "Sabbath Prayer" and "Do You Love Me," both duets with Tevye, as well as a few solo moments (in "Anatevka" and "Sunrise, Sunset"), "and I always sing with the ensemble," Uzal says. "So I do a fair amount of singing, but mostly, musically, the spotlight is not on me. It's not like I have a big solo. Aside from Tevye, the show is pretty much spread out" among the cast. 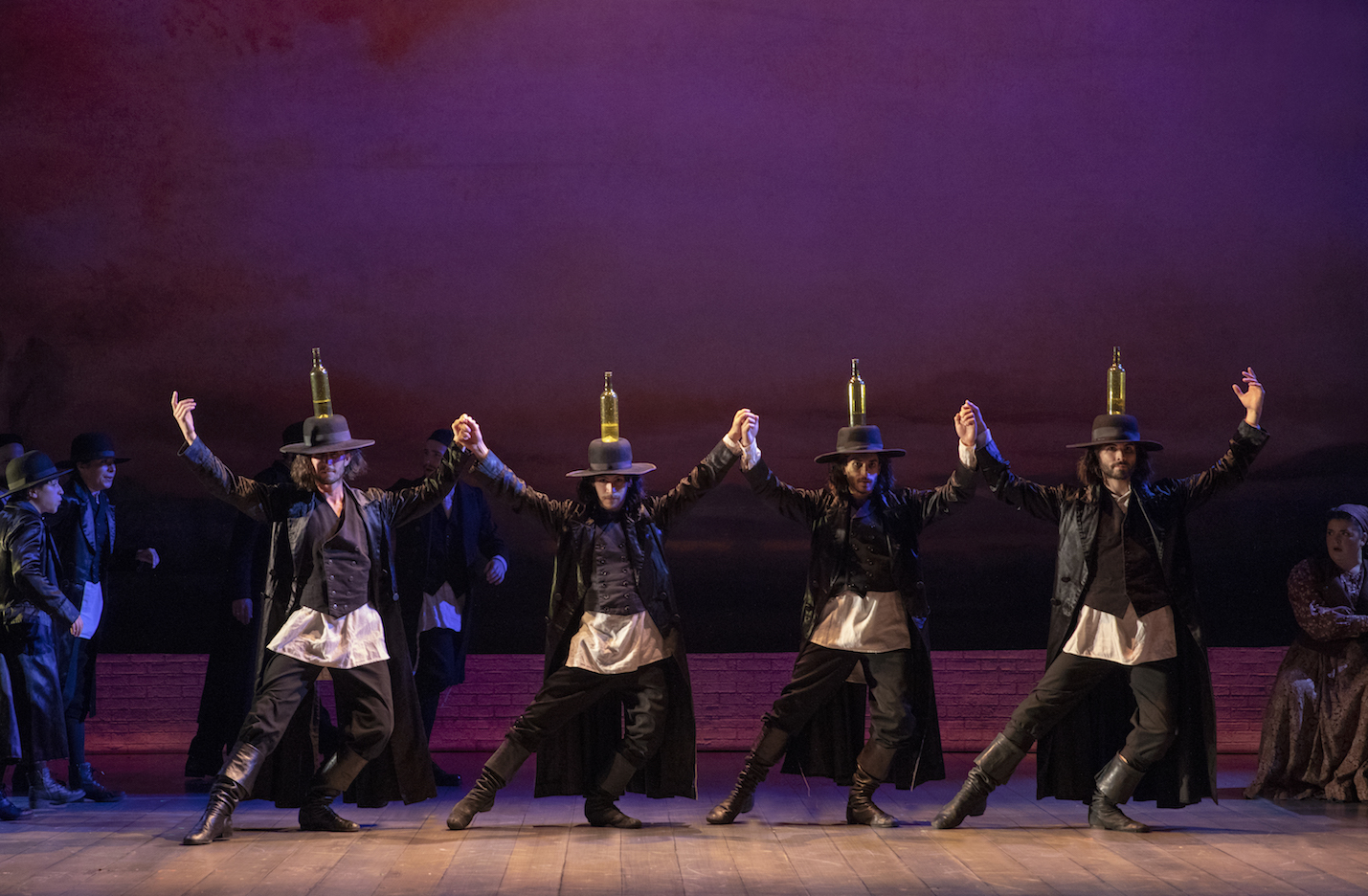 Four Jewish men commemorate a wedding with a bottle dance. (Photo by Joan Marcus)  "Oh my goodness," says Uzal. "[The actor who plays] Tevye has to be a titan onstage. Atlas. That's the titan."

That actor, Israeli theater and film star Yehezkel Lazarov, plays the poor dairyman in a little shtetl (segregated village) in a corner of 19th-century Russia, perhaps not far from Kyiv, and which is in constant peril of tsar-inspired pogroms against Jews.

He has five daughters, three of whom are at or nearing marriageable age. The eldest, Tzeitel (Kelly Gabrielle Murphy), rejects her father's choice of a much older husband (Andrew Hendrick as Lazar Wolf) in favor of her childhood friend, mousy tailor Motel (Daniel Kushner). The next-eldest, Hodel (Ruthy Froch), falls for an itinerant student, scholar and revolutionary named Perchik (Solomon Reynolds), whom she insists she will marry with or without her father's permission. And the middle child, Chava (Noa Luz Barenblat), commits what in her community's eyes is the unforgivable sin of falling in love with a non-Jew (Jack O'Brien as Fyedka).

After nearly 60 years since it took Broadway by storm (with Zero Mostel as Atlas — er, Tevye), the show's appeal has not lessened, Uzal says.

"This is a show that is appealing to everybody, every single person, regardless of age or background," she says. "The book and the music are so brilliant. It's an honor to be part of a production that reaches so many people and touches so many souls."

‘Fiddler on the Roof’