The end of the road: UA parents have logged miles, memories 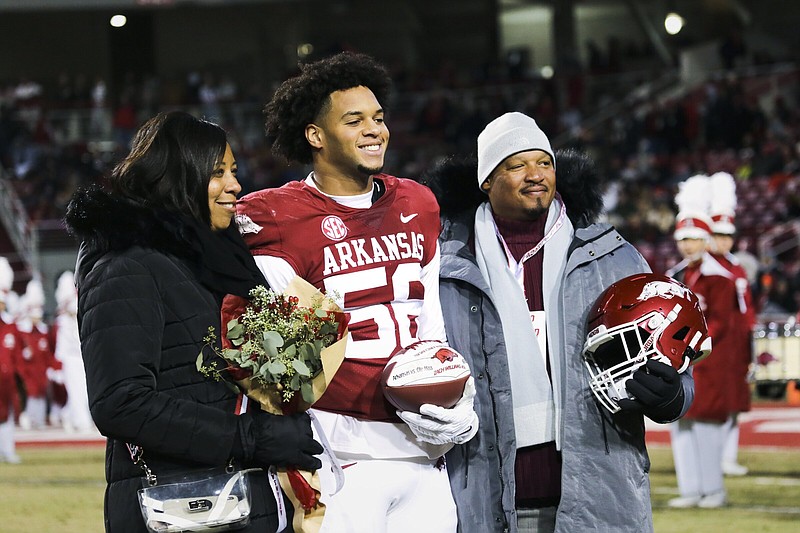 Arkansas defensive lineman Zach Williams (center) takes part in senior night activities last Saturday in Fayetteville with his mother Keli and his father Rickey, a former Razorback. Friday’s game at Missouri will be just one of a long list of road trips for the Williams and other Razorback parents. (NWA Democrat-Gazette/Charlie Kaijo)

Football parents of University of Arkansas seniors will be wrapping up their last regular-season game on Friday at Missouri, but the memories and friendships will forever live on.

"I did my part, and when it got to her part, and just listening to the things she said, I started tearing up," Jeff said. "Football has been a part of our family's life for 18 years, and for it to seemly be coming to an end, it's a big deal."

Laurie estimates the cost of attending every game in Bumper's five seasons to be the equivalent of the cost of her son's five years of scholarships.

"It's something you look forward to every weekend starting in August to December," Jeff said.

The Pool family, along with Chad Broussard, hosted a tailgate in Lot 44 the last five years, and it eventually grew to about 80 people, including parents of offensive linemen Brady Latham and Patrick Kutas and linebacker Drew Sanders.

"They just have embraced Arkansas and Arkansas fans," Laurie said of the Sanders'.

Arkansas fan Ross Pope, who lives in Trenton, Tenn., became a regular at the tailgate thanks to a chance meeting with Laurie after last year's heartbreaking loss at Ole Miss while she and five others were waiting on a ride.

"A guy walks up with a cooler on his shoulder, and he had an Arkansas sweatshirt on, and I was like, 'Excuse me sir, is there anyway we can buy a beer from you?' " Laurie said. "I was like we just need a beer."

Six beers later, the Pools gained a friend and an addition to the tailgates.

"He actually gets to our spot before we're there," Laurie said.

The beautiful setting of Provo, Utah, and the people of BYU made the road trip the favorite of Jeff and Laurie.

"Every time Bumper would make a tackle everyone around me would clap and we're sitting in the opposing section," Jeff said.

Last year's Ole Miss game was quite different from BYU.

"Fans were throwing whiskey bottles at us. Cussing us," Jeff said. "Ole Miss is the only one that puts the opposing player parents next to the student section."

It was revealed earlier in the season that Bumper has been hampered by a hip injury. On Monday, Arkansas Coach Sam Pittman said he may not play in the last two games.

Jeff said Bumper's career has exceeded what he had hoped.

"If we could have written a script five years ago, we wouldn't have gotten anywhere close to the joy that our family has had over the past five years," Jeff said. "The hospitality that's been given to us, getting to watch Bumper grow, not only as a football player but as a person."

The team enduring back-to-back 2-10 seasons and other trying times during Bumper's five seasons made the highs that much better.

"The low points throughout these years have made high points and the wins so much greater," Laurie said. "That's life. Coming back and fighting hard."

Rickey and Keli Williams have attended every game but the Texas A&M contest in 2019 when Zach was out with an injury.

"It's been the fastest four years ever," Keli said. "I still remember the day we packed him up and took him to the Hill."

Zach Williams, who was a 4-star recruit out of Joe T. Robinson, could come back for a fifth season because of the covid-19 pandemic.

"I'm proud for how far he's come," Keli said. "He's been through adversity. A different position coach every single year. He had to unlearn and then learn, and he adapted to the best of his ability."

Rickey, who was an All-Southwest Conference linebacker at Arkansas, cherished seeing his son's first home game.

Both Williams agreed that the LSU fans in Baton Rouge during Zach's freshman season provided entertainment.

"They were throwing beer at Razorback fans," Keli said. "I've never seen anything like it. They were battling on the field and these fans were battling in the stands."

The unruly Tiger fans were orderly while giving themselves up.

"The funniest thing about it was, the cops really didn't have to make it up to the steps," Rickey said. "The officers started walking to them and they automatically surrendered themselves."

Unpleasant fans aren't just on the road. A Cincinnati fan was being obnoxious toward the Razorback players. The fan calmed down after Rickey verbally intervened. Offensive lineman Beaux Limmer's parents Susan and David Limmer approved of Rickey's actions.

"Beaux Limmer's mom came up to me at the next game and said David is your biggest fan. He knows he doesn't have a problem when you're around," Rickey said laughing.

The BYU trip was also the Williams' favorite road trip.

"The people were so nice," Keli said. "You almost feel bad that you're competing against each other. They're bringing you Cougar Tails [maple doughnuts], they bring you ice cream."

Zach, who's third on the team in sacks with 4.5, is usually low-key and reserved with his emotions while being self-critical of his play.

"Lately when I see him get sacks and he actually celebrates a little, that makes me smile because he's actually out there having fun," Keli said. "That's a cherished moment for me."

Rickey's most memorable moment was the Liberty game when he was named the Hogs' honorary captain.

"To step on the same field my son was going to play on, it nearly brought me to tears," Rickey said. "The university did a wonderful job in treating me so well and making sure I got a chance to see him before the game."

The Strombergs have traveled 36,402 adventurous miles to watch Ricky, who signed with the Hogs from Tulsa Union.

One of the their joys has been visiting opponents' stadiums.

"They're just the most beautiful places," said Scott, who said his and Diane's favorite road trip was BYU. "We appreciate the history."

Scott's favorite experience as a parent was last year's 40-21 victory over Texas in Fayetteville.

"After the game Ricky coming up and saying, 'We just beat the crap out of Texas'," Scott recalled.

Diane likes to take pictures during games and shot a special moment as Ricky, his teammates and fans stormed the field after the game.

"He goes out to congratulate his teammates and the opposing team and then he gets all excited with the game, he's out there skipping like a little kid," Diane said. "Just the joy on his face and I zoomed in and it's just for all of us to have."

Scott's side of the family used the Texas A&M game in Arlington as a gathering.

"My brother has a lake house over there, so it's family reunion," Scott said.

Their miles traveled have had challenges. While coming back from the last year's Ole Miss game, poor reception led to a delay in receiving a text from Christy and Bob Latham, parents of offensive lineman Brady Latham. The end result had the Strombergs sitting in traffic for five hours on Interstate 40 between Memphis and Little Rock.

"The Lathams were behind us and they were texting 'Hey, you need to get off at such and such exit because there's a crash up ahead,' " Diane said. "The moment the text came we had passed that exit."

In addition to the Lathams, they have also formed a special friendship with safety Myles Slusher's parents. One of their more heartfelt relationships began prior to the 2019 Missouri game in Little Rock, when they met a faithful elderly Tiger fan at their hotel and have stayed in touch with him since.

"Scott starts a conversation and lo and behold we found out that was the first Missouri game he's attending without his wife because he lost her to cancer," Diane said.

The Strombergs tailgated with him the following year in Columbia and plan to visit him on Friday.

While driving back from a road game at Alabama, Diane noticed a giant white cross in Jasper, Ala., which proved timely with the Razorbacks about to leave for Fayetteville.

"As I saw it, Ricky texted me because he doesn't like to fly he said, 'Hey mom, will you say a prayer for me because the plane will be leaving,' " she said. "I took a picture of the cross and sent it to him."

Ricky, who could also return for another year because of the pandemic, expresses his appreciation for his parents often.

"He's come off the field many of times and has told us privately how much it meant to him that we were there," Diane said. 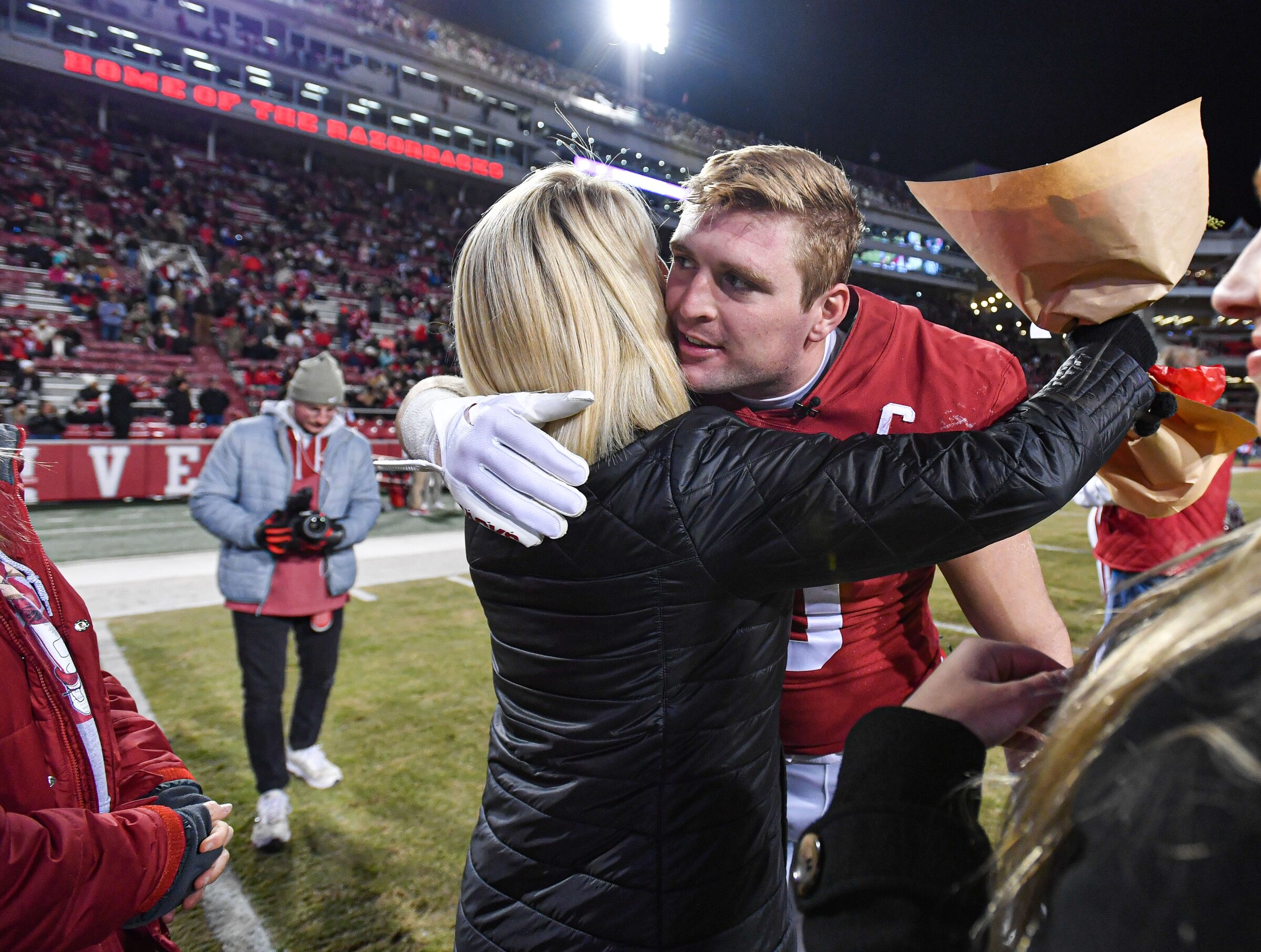 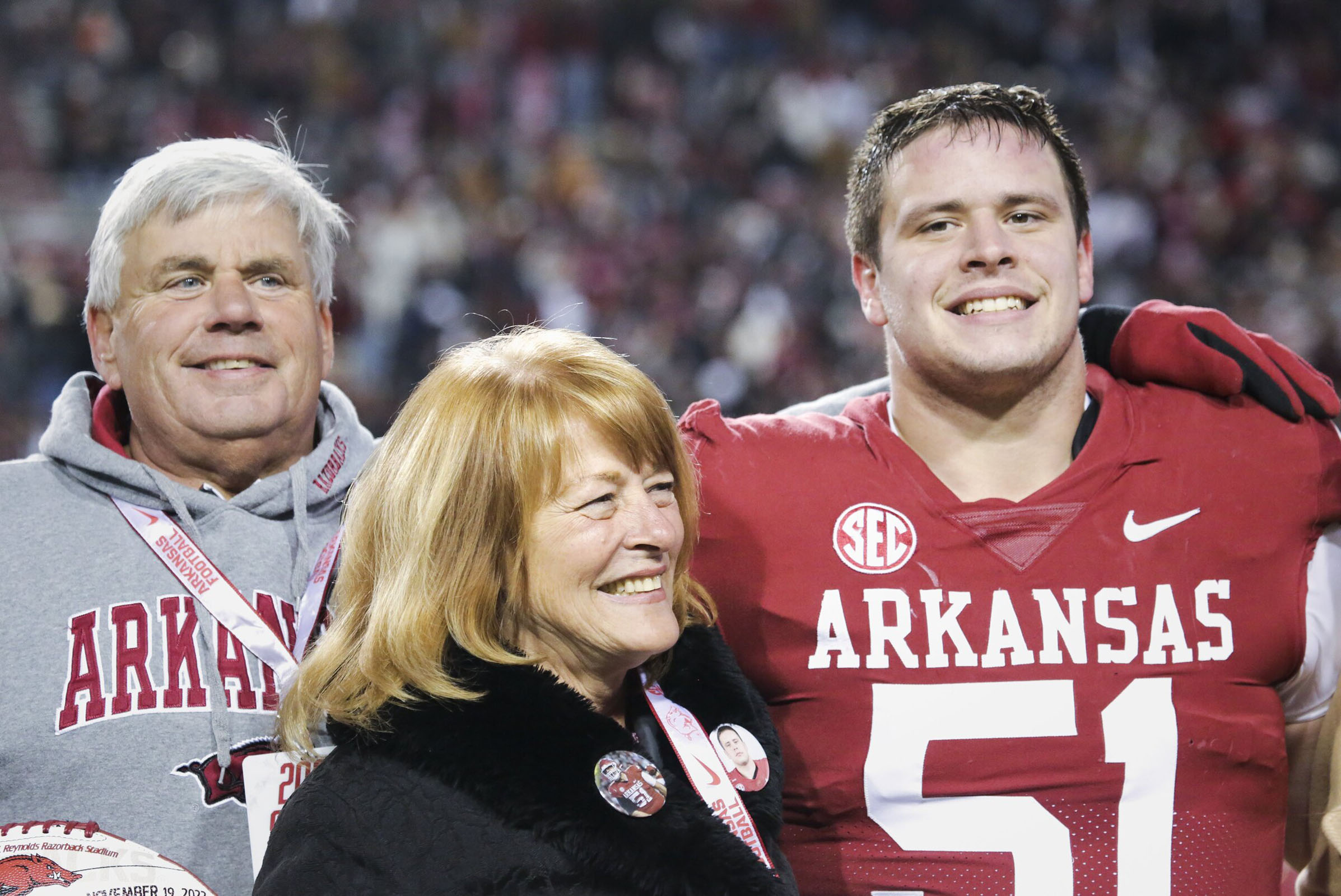 Scott Stromberg (left) and his wife Diane (middle) have traveled 36,402 miles to watch their son, Arkansas offensive lineman Ricky Stromberg, and Scott said one of their joys has been visiting opponents’ stadiums. “They’re just the most beautiful places,” Stromberg said. “We appreciate the history.” (NWA Democrat-Gazette/Charlie Kaijo)

Print Headline: The end of the road