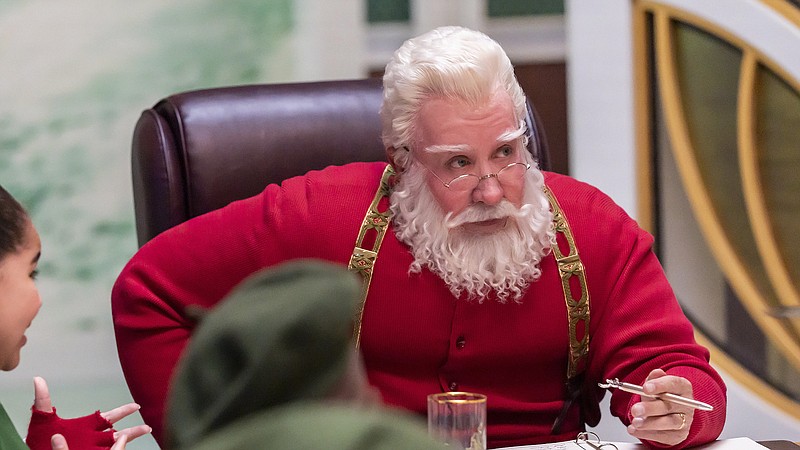 "The Santa Clause" is coming to town for a fourth installment of the Tim Allen franchise. But now it is a six-episode television series, "The Santa Clauses," which premiered Nov. 16 on Disney+. Following the much-derided "The Santa Clause 3: The Escape Clause," one could call it something of a recovery, and though it's thin in characterization and obvious in the emotional beats — sort of the point in a work like this, anyway — it's a respectable, fairly amusing holiday entertainment for anyone who would like to start their Christmas now.

For those fresh to this epic, which first came down the cultural chimney in 1994 with "The Santa Clause" — the contractual "clause" being the pun the whole series is built on — Allen plays Scott Calvin, a distracted, divorced dad who startles Santa on his roof one Christmas Eve. Santa slips, falls and dissolves, leaving only the suit and a card instructing the finder to put it on; this turns him into the actual new Santa.

In the second film, Scott acquires a wife, Carol (Elizabeth Mitchell), another legal obligation. As the Disney+ series begins, they've got a couple of teenage kids Sandra (Elizabeth Allen-Dick) and Cal ( Austin Kane), and Scott/Santa, who is as old as Tim Allen, is slowing down. He's losing weight no matter how much junk he eats, his magic has become unreliable and, realizing that the last 28 years have been more about him than his family, he's considering retirement.

Carol, who can barely remember her own name, is in the grip of a long-delayed identity crisis, having "left a great job to be the nameless, faceless woman behind a larger-than-life man." The kids, meanwhile, have grown curious about ordinary human life.

Like old ornaments hung on a new tree, the TV series echoes and calls back to the movies (including a couple of clips). Eric Lloyd makes an appearance as Scott's son Charlie, from his first marriage, whom Scott tries to interest in the job; David Krumholtz, absent from "The Santa Clause 3," returns as now-former head elf Bernard. New Santa candidate Simon Choksi (Kal Penn), is, like Scott in his previous life, a single father in the toy business who's too busy for his child Grace (Rupali Redd) who he obviously loves.

As in the second and third films, the North Pole will be taken over by a figure who doesn't have its best interests at heart, and, as in those and countless other Santa-themed films, Christmas itself will be threatened.

As always, elves matter. (That they are played by children — who are not playing children — takes some getting used to.) Prime among them are all-business elf-in-charge Betty (Matilda Lawler, so great in "Station Eleven" and invaluable here), who declares, "I don't make the rules. I just enforce them with steadfast intensity." She's married to the antic Noel (Devin Bright), insanely, unhealthily devoted to Santa, with whom he rides shotgun on Christmas Eve.

Created by Jack Burditt, who created the Allen sitcom "Last Man Standing," "The Santa Clauses" functions as both a tribute to and an affectionate critique of the franchise, retconning its weird premise, commenting on the male-dominated milieu of its predecessors. The jokes range from low to ... less low, from obvious to obscure.

Because Scott and Bernard are older (there is an explanation for Bernard aging), there are humorous references to acid reflux and a hiatal hernia. Scott steps in reindeer poo, an elf vomits glitter, Santa's name is misspelled as "Satan." There is the usual confection-ication of swearing ("Son of a biscotti!" "For the love of Mike & Ike!"). Betty remarks that Santa is into NFTs — "nutty fudge cakes." There is an angel dust joke, of all things, and a dig at the "Star Wars" Christmas special. There are many jokes built on elves being centuries old.

With Penn taking on the series' more manic attitudes, Allen gets to be nicely relaxed here, and I found it a relief to see him in his own skin during the family's sketchy sojourn in Chicago. There and elsewhere, the kids' characters could be better developed, especially since their needs and desires are supposedly central to the story. At the same time character development matters less than plot here, even as the big question — "Will Christmas happen?" — isn't really a question at all.

As to who will be the next Santa, it's not hard to see where the show is going — some big clues are planted early on, and one never really expects Simon to work out. He thinks in terms of "corporate synergy," refers to Christmas lists as "orders" and responds to an elf asking "What's a union?" by exclaiming, "Oh, man, I love this place!" Of course, he will have a lesson to learn, because learning lessons is a Christmas-movie tradition. The conclusion of the series sort of buries everyone's concerns except Scott's, but homilies about magic and believing trump domestic problems, and there is nothing a group hug can't make moot. And the elves will be happy.