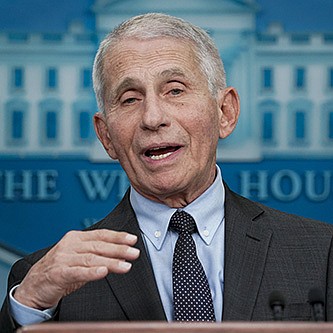 In his final White House briefing Tuesday, Dr. Anthony Fauci urged Americans to get the updated booster “for your own safety, for that of your family.” (AP/Patrick Semansky)

For the first time, a majority of Americans dying from the coronavirus received at least the primary series of the vaccine.

Fifty-eight percent of coronavirus deaths in August were people who were vaccinated or boosted, according to an analysis conducted for The Washington Post’s Health 202 newsletter by Cynthia Cox, vice president at the Kaiser Family Foundation.

It’s a continuation of a troubling trend that has emerged over the past year. As vaccination rates have increased and new variants appeared, the share of deaths of people who were vaccinated has been steadily rising. In September 2021, vaccinated people made up just 23% of coronavirus fatalities. In January and February this year, it was up to 42%, according to articles by Fenit Nirappil and Dan Keating of The Washington Post.

“We can no longer say this is a pandemic of the unvaccinated,” Cox told The Washington Post.

Being unvaccinated is still a major risk factor for dying from covid-19. But efficacy wanes over time, and an analysis out last week from the Centers for Disease Control and Prevention highlights the need to get regular booster shots to keep one’s risk of death from the coronavirus low, especially for the elderly.

Anthony Fauci, the nation’s preeminent infectious disease expert, used his last White House briefing Tuesday ahead of his December retirement to urge Americans to get the recently authorized omicron-specific boosters.

“The final message I give you from this podium is that please, for your own safety, for that of your family, get your updated covid-19 shot as soon as you’re eligible,” he said.

White House press secretary Karine Jean-Pierre tweeted: “Dr. Fauci is a pillar of the public health community. From HIV and AIDS to Ebola to COVID, he has kept the American public informed and prepared through multiple crises. It was an honor having him in the briefing room to remind Americans on the importance of getting vaccinated.” Cox, like many experts, says she’s not surprised by the ratio shift. There are a few reasons: At this point in the pandemic, a large majority of Americans have received at least their primary series of coronavirus vaccines, so it makes sense that vaccinated people are making up a greater share of fatalities.

Individuals at greatest risk of dying from a coronavirus infection, such as the elderly, are also more likely to have received the shots.

Vaccines lose potency against the virus over time and variants arise that are better able to resist the vaccines, so continued boosters are needed to continue to prevent illness and death.

The BA.5 omicron subvariant became dominant in July and consistently accounted for the majority of new coronavirus infections across the United States until earlier this month. The highly transmissible strain fueled a surge of new infections, reinfections and hospitalizations throughout the summer.

It’s still true that vaccinated groups are at a lower risk of dying from a covid-19 infection than the unvaccinated when the data is adjusted for age. An analysis released by the CDC last week underscores the protection that additional booster shots offer against severe illness and death as immunity wanes.

Records from August, when the highly contagious BA.5 variant reached its peak, show: That month, unvaccinated people aged 6 months and older died at about six times the rate of those who had received their primary series of shots.

People with one booster dose were even better protected. Unvaccinated people over the age of 5 had about eight times the risk of dying from a coronavirus infection than those who received a booster shot.

Among individuals who were eligible to receive additional booster shots, the gap is even more striking. Unvaccinated people 50 and up had 12 times the risk of dying from covid-19 than adults the same age with two or more booster doses.

David French, senior editor for the Dispatch, tweeted: “One of the saddest phenomena of the online right is the absolute fury at those of us who supported COVID vaccines and continue to support COVID vaccines. The death toll of vaccine refusal is simply staggering and heartbreaking.” He pointed out that 100% vaccination could have prevented 300,000 deaths between January 1, 2021, and April 30, 2022.

Americans’ uptake of the latest booster shots continues to be slow.

About 35 million people have received the updated boosters that became available to people 12 and over in September and to children as young as 5 last month. That’s a little over 10% of the U.S. population, amid concern that cooler weather will bring a surge of covid cases as people move indoors and respiratory infections spread.

Wednesday, the White House announced a six-week push ahead of the holidays aimed at increasing booster uptake among senior citizens, people in racial minorities and those who live in rural areas, all of which have disproportionately suffered severe disease and death during the coronavirus pandemic, Frances Stead Sellers and Ariana Eunjung Cha of The Washington Post write.

Senior officials said the Biden administration would direct some of its remaining resources to fight the pandemic into a $475 million campaign to support community health centers and organizations working to get the elderly and people with disabilities boosted.

The administration’s push coincided with the release of a CDC study offering the first evidence that the bivalent boosters are better at preventing symptomatic infection against newly circulating variants than earlier doses.

“I feel very confident that if people continue to get vaccinated at good numbers, if people get boosted, we can absolutely have a very safe and healthy holiday season,” Ashish Jha, White House coronavirus czar, said Wednesday.