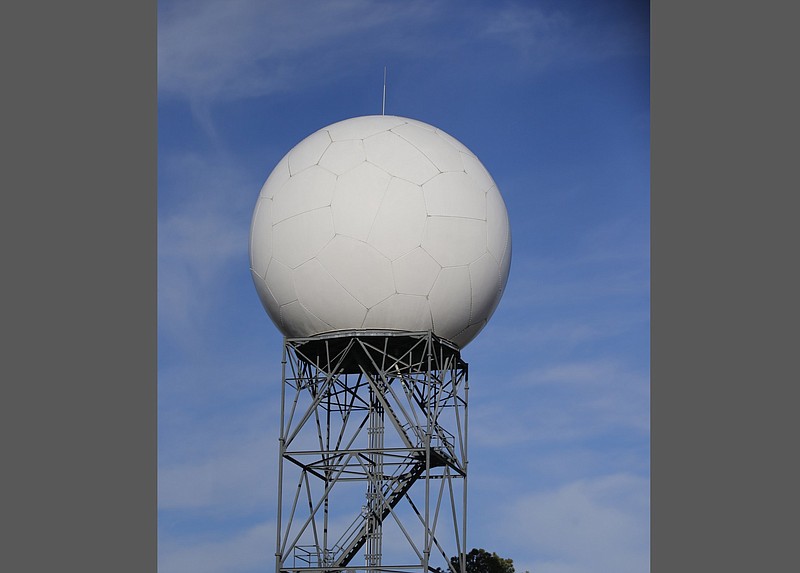 The National Weather Service Radar across from the North Little Rock Airport, seen here on Wednesday, Nov. 23, 2022, will be offline for two weeks starting on Monday as it undergoes critical upgrades. (Arkansas Democrat-Gazette/Thomas Metthe)

KLZK, a WSR-88D radar operated by the National Weather Service, will be offline as it undergoes critical upgrades.

Located at the North Little Rock Airport and first erected in the early 1990s, the pedestal the radar dish sits on will be replaced for the first time in an effort to extend the radar’s lifespan.

“Basically, there’s a big dish inside the dome of the radar and that dish is sitting on top of a pedestal and that pedestal rotates,” said Willie Gilmore, a meteorologist with the National Weather Service in Little Rock. “Pretty much 24/7/365, that dish is spinning.” The WSR-88D radars were originally designed to last 25 years.

The refurbishing is the third step in a four-step project to renovate all 159 radars that are part of the NWS’ network across the country.

The eight-year project, NEXRAD Service Life Extension Program (SLEP), is a $135-million program by the NWS, the U.S. Air Force and the Federal Aviation Administration with a goal to extend the life of the WSR-88Ds into the 2030s. The project is scheduled to be complete in 2023.

“I think it’s two to four [dishes being renovated] at a time throughout the country every few weeks until they all have been replaced with the upgraded or refurbished systems,” said Gilmore, who has been with the Little Rock branch of the NWS since 2009.

Central Arkansas won’t be without radar coverage during the two-week window that KLZK is down. In its place, the WSR-88Ds in Springfield, Mo. (KSGF); Milling-ton, Tenn. (KNQA); Brandon, Miss. (KDGX); Shreveport, La. (KSHV) and in Fort Smith (KSRX) will step in.

It’s not a entirely unusual situation for the Little Rock NWS.

The radar has been taken offline because of lightning strikes, forcing Little Rock to rely on other radars.

“We also have other tools that we utilize, such as high resolution satellite data that we can use to compensate,” Gilmore said. “We always have eyes out there, we just won’t have our local radar for up to two weeks.” Even with the neighboring radars in place, there could be blinds spots.

“The biggest thing that we may run into is, as the radar beam goes out across the land, the Earth curves,” Gilmore said. “As that happens, the radar beam gets higher and higher off the ground the further out you get. The further away from the radar you are, the higher in the atmosphere it sees. There is that potential that we may not be able to see some near-ground features.” Instances like this are why the NWS utilizes its storm spotters network.

“We use those on a day-today basis,” Gilmore said. “We always try to use everything we have at our disposable to get our mission accomplished.”