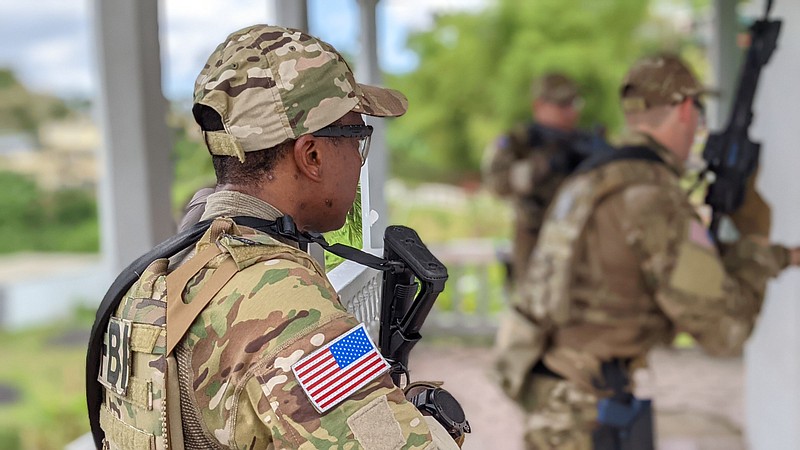 SWAT participates in a close-quarters battle training during SWAT New Operator Training School, or NOTS, in San Juan, Puerto Rico, in May 2021. Members of law enforcement prepare for various scenarios through such trainings. (Special to The Commercial)

"Run. If you can't, hide, but if you have to, be prepared to fight for your life."

Those words made a chilling impression on Kathy Richards of Pine Bluff, who sat through an active shooter class last spring at the University of Arkansas at Pine Bluff.

Richards thought the information presented that day was so useful to the general public, she approached the FBI speaker, asking if she would consider returning to the area to do additional presentations.

The speaker agreed and on Dec. 3 at 10 a.m., an FBI special agent will be presenting a class at Bethany Chapel Missionary Baptist Church, 1923 S. Olive St., in Pine Bluff.

It is free and open to the public.

According to the FBI, most mass attackers use firearms.

Richards said she learned a number of tactics to survive such an incident during the class.

"The shooter's tactic is to kill as many as possible in a short period of time. Your first instinct is to hide, but you become a sitting duck. Instead, the FBI agent recommended running," Richards said.

Hagan agreed, saying anyone in this type of situation should "first run," but if unable to, "hide;" but "be prepared to defend yourself. To fight."

The presentation also shares survival tips such as noting where exits are when entering a store or other building. It's called situational awareness, Hagan said.

"Given the problems [mass shooting events around the country], I think we all should consider attending it," Richards said.

So far this year, there have been more than 600 people killed in mass shootings around the country. According to a story in The Washington Post, "Not a single week in 2022 has passed without at least four mass shootings." And, Richards said, it could happen here.

In fact, the nation's first mass school shooting happened in Jonesboro on March 24, 1998, more than a year before the April 20, 1999, shooting at Columbine High School in Colorado.

Just this week, the nation has seen even more mass shootings.

The Associated Press reported that a Walmart employee shot and killed six people before taking his own life on Nov. 22 at Chesapeake, Va. Six people were also wounded. On Nov. 19, five people were shot and killed and 17 wounded in an attack at Club Q in Colorado Springs, Colo. The list goes on and on.

Since announcing the Pine Bluff class at Bethany Chapel, they've had so many registration requests that the church staff decided to hold the program in the sanctuary.

Richards said in addition to the general public, they had inquiries from the Pine Bluff mayor's office, the public and a number of area churches who plan to bring members of their congregations.