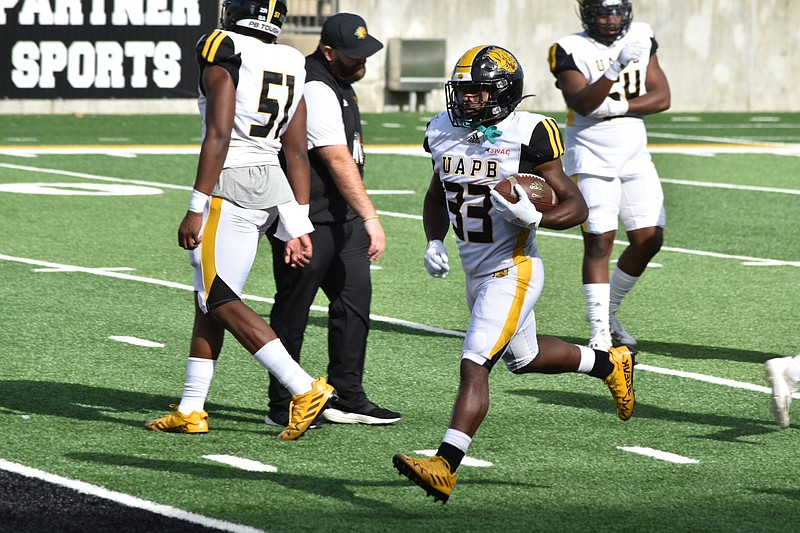 MONTGOMERY, Ala. -- The Golden Lions won't soon forget this Thanksgiving, and for that they should be thankful.

Sophomore Kayvon Britten broke the 1,000-yard rushing mark for the season and scored on a 14-yard run with 49 seconds left Thursday to push the University of Arkansas at Pine Bluff football team to a 19-14 win over Alabama State University in the Hornets' 98th annual Turkey Day Classic.

UAPB (3-8, 1-7 SWAC) ended the season by breaking an eight-game slide, which was tied for the longest by the program since dropping 17 in a row from 1985-86 and handed interim Coach Don Treadwell his first victory in four tries.

"I am so proud of our young men," Treadwell said. "They have hung in there and finished strong. They have kept fighting every step of the way. Our whole theme for the last four games was to finish strong. What better way to finish strong than on Thanksgiving Day."

Britten rushed for 160 yards and 3 touchdowns on 28 carries, finishing the season with 1,063 yards. Thursday's game was his third-best rushing performance of the season, following a career-high 277 yards vs. Alabama A&M University and 237 against Lane College.

"All credit to my o-line," Britten said. "They did a big job this year. I love them boys."

UAPB led 13-0 at halftime and refused to let another double-digit lead slip away this time. Britten helped give the Lions a great start, rushing for touchdowns of 7 and 11 yards as part of his 74 first-half yards on 15 carries.

Quarterback Perry, playing in his 44th and final college game, completed 14 of 29 passes for 113 yards with an interception. He was knocked out as he tried to slide on an 11-yard carry with 9:37 left in the game.

Perry only complained of a minor headache after the game.

"They ruled me out with a concussion," he said. "I'm sad it happened during my last game, but it's the game we play and the risk we take. But to see my guys fight for me, knowing those guys are always behind me 1,000 percent, I feel so appreciated for that. And for Thanksgiving, what better way to go out for my last game."

Alabama State (6-5, 4-4), which already had a winning record in Coach Eddie Robinson Jr.'s first season at the helm, surged to a 14-13 lead thanks to two third-quarter touchdown runs by Jacory Merritt (3 and 50 yards). Merritt had 91 yards on 17 carries.

The Hornets failed to extend the lead after Nathanial Eichner missed a 31-yard field goal early in the fourth quarter. They possibly could have put the game away about 12 minutes later, but Jamarion Henderson -- who had made his third interception of the season Thursday -- recovered a fumble off a bad pitch at the Lions' 28 with 2:30 to go.

Chancellor Edwards completed his next three passes for a total of 29 yards, and Britten broke a 23-yard run to the Hornets' 20. Three plays later, Britten rushed into the end zone with his arms extended in joy and UAPB's first fourth-quarter lead since blowing out North American University 76-3.

Alabama State was called for holding on a failed UAPB pass attempt for the extra two points, but Britten was then stopped on a rush.

On the Hornets' last drive, Dematrius Davis threw two incompletions and then completed a 22-yard strike to Kisean Johnson. Darius Edmonds dropped a pass in the red zone, and Davis then completed a pass to Ja'Won Howell for 8 yards with 2 seconds left.

Colton Adams had 17 tackles and Irshaad Davis 10 for Alabama State.

"This was a true testament to all three phases playing well together," Treadwell said. "The defense gave us energy. The offense gave our defense some energy. That's what you want when you talk about a complete-game win."

Syncere Jones recovered a muffed punt at the Hornets' 16, and Britten covered those yards in three runs to put UAPB on the board with 7:02 left in the first quarter.

Henderson ended a Hornets threat on the next drive with an interception.

Alabama State's Santo Dunn ran 37 yards down to the Lions' 20 early in the third quarter. Three plays later, Merritt put the Hornets on the board.

But Britten had yet to add to UAPB history.

He made a 16-yard carry on the Lions' next drive to put him over the 1,000-yard mark, the first for the team since Taeyler Porter had back-to-back such seasons in 2018-19.

Merritt capitalized with a 50-yard weave into the end zone at the 5:17 mark of the third quarter. Eichner's extra point gave the Hornets the lead.

"I just believe in Coach [Jake] Bahr," Henderson said of the linebackers coach. "He set me up in practice and tells me it's going to come in the game, and I swear, every time it comes. He's an amazing coach."

The season is over for both teams. UAPB now must decide on a permanent replacement for the fired Doc Gamble, but for now, turkey in Pine Bluff likely couldn't be more satisfying for the Golden Lions.

"I think most people will at least save some leftovers for us tonight and we will celebrate it tomorrow," Treadwell said. 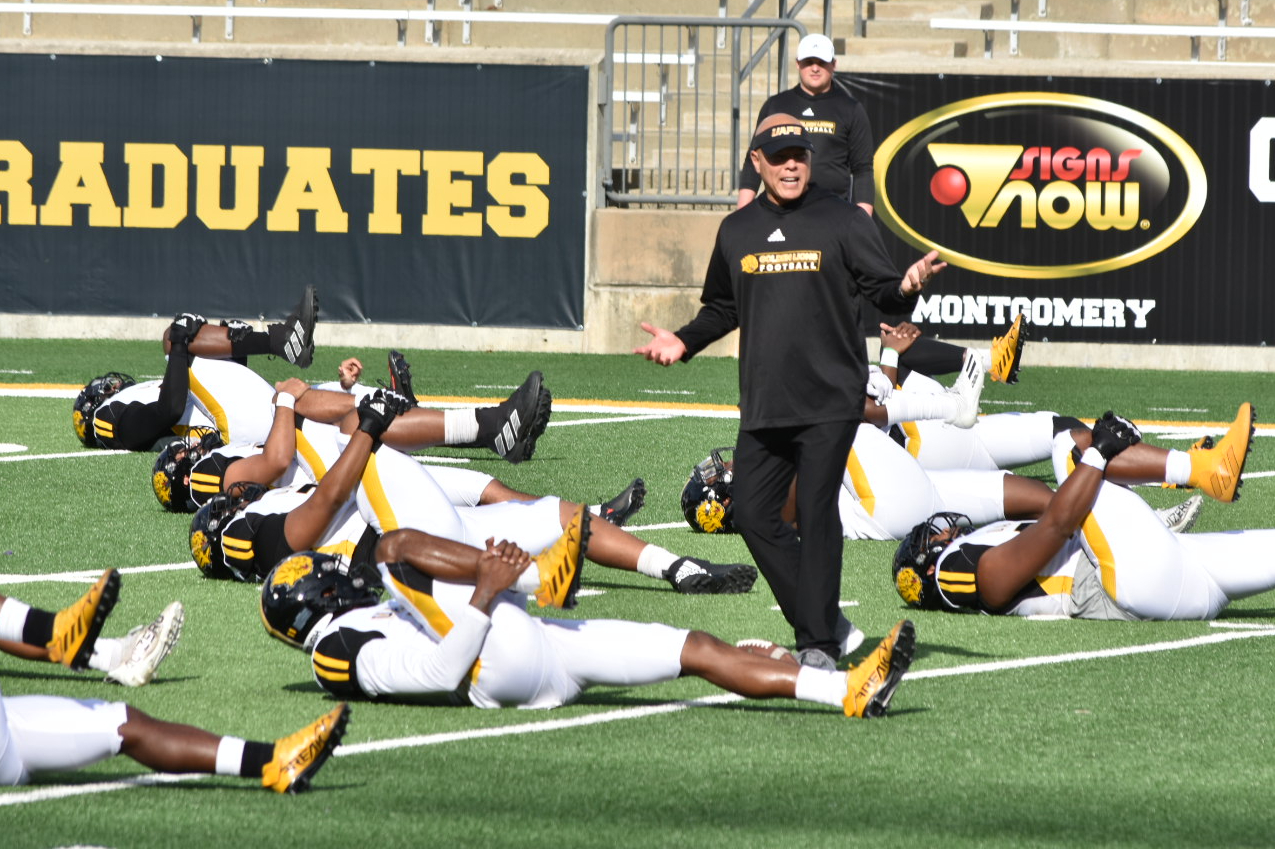 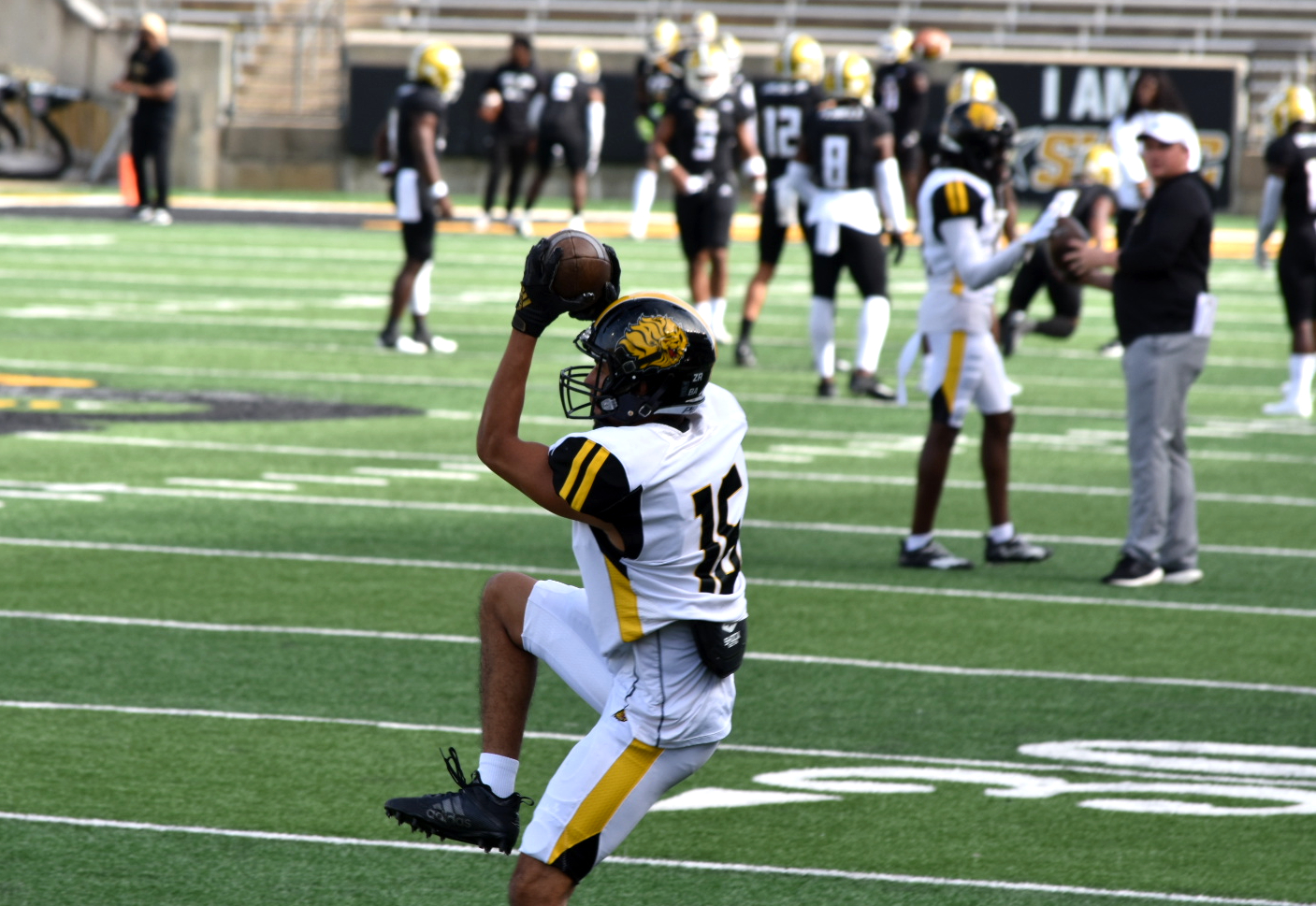