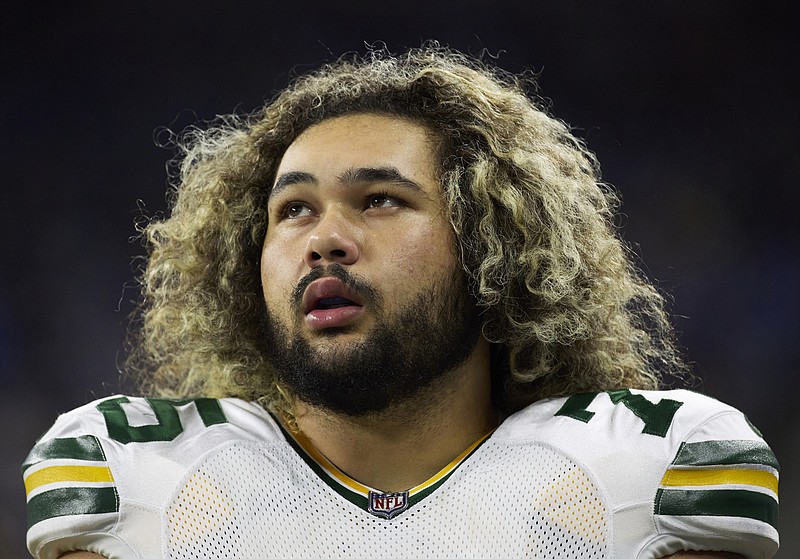 Green Bay Packers rookie offensive lineman Sean Rhyan has been suspended without pay for six games for violating the NFL's policy on performance-enhancing substances. The penalty means the third-round draft pick out of UCLA must sit out the rest of the regular season. NFL officials announced the suspension Friday. The Packers said they wouldn't have any comment on the matter because of the confidentiality of the process. Rhyan has participated in only one play this season and for no offensive snaps. He was active and appeared in one special-teams play on Nov. 6 in a 15-9 loss at Detroit.

No ACL tear for Miller

Tests on Buffalo Bills star pass rusher Von Miller's injured right knee showed no tear to the anterior cruciate ligament, a person with direct knowledge of the injury told The Associated Press. Coach Sean McDermott has already ruled Miller out of next week's game against the New England Patriots. The person who detailed Miller's test results spoke to The AP on the condition of anonymity because the team has not revealed that information. ESPN first reported the test results on Miller. McDermott on Friday declined to discuss the severity or nature of the injury sustained in a 28-25 win over the Detroit Lions on Thanksgiving.

Ravens' tackle out vs. Jags

Baltimore tackle Ronnie Stanley has been ruled out of Sunday's game at Jacksonville with an ankle injury. Stanley was not able to practice this week after he was injured in last weekend's victory over Carolina. The Ravens also ruled cornerback Jalyn Armour-Davis (hip) out for the game. Running back Gus Edwards (hamstring/knee) is questionable after he was a full participant in practice Thursday and Friday. Coach John Harbaugh said he's optimistic that Edwards will be able to play for the first time this month. Baltimore is trying for its fifth consecutive victory.

Australia had to fight back twice to reach its first Davis Cup final in 19 years after beating Croatia 2-1 on Friday. Lleyton Hewitt's team recovered from losing the first singles. Then the Australian doubles pair battled back from a set down in the decider. Australia won its 28th and last title in 2003. It has finally got back to the final. Borna Coric put Croatia ahead by beating Thanasi Kokkinakis 6-4, 6-3, but Alex de Minaur leveled after defeating Marin Cilic 6-2, 6-2 to send it to the doubles.

The Nashville Predators postponed home games scheduled for Friday and today because of a water main break that soaked their downtown arena. Hours after the Predators decided they couldn't play Friday's game against the Colorado Avalanche, the team announced it also postponed today's game against the Columbus Blue Jackets. Makeup dates for the two games will be announced later. The NHL said the water main break that occurred Friday morning "significantly impacted the event level" of Bridgestone Arena. Team locker rooms and the ice surface are on the event level. Predators President and CEO Sean Henry told reporters that the water in the event level ranged from 3 inches to 3 feet.

The Pittsburgh Pirates have further addressed their offensive shortage at first base by signing Carlos Santana to a one-year, $6.7 million deal pending the passing of a physical, a source confirmed to the Pittsburgh Post-Gazette on Friday night. Santana, 36, has played for Cleveland, Philadelphia, Kansas City and Seattle during his MLB career that totals 13 years and 1,784 games. Last year, Santana split time between the Royals and Mariners, hitting .202 with a .692 OPS in 131 games.

Dan Bradbury will take a one-shot clubhouse lead into the weekend after second-round play at the Joburg Open again ended early because of thunderstorms and then fading light on Friday. The Englishman shot a 5-under 66 a day after his 63 equaled the course record at Houghton Golf Club. Bradbury mixed three bogeys with six birdies and an eagle on the par-5 fifth before play was suspended for nearly three hours because of thunder and lightning. Play resumed in the afternoon but was later suspended because of fading light. Round two was set to restart at 6:30 a.m. local time today. Casey Jarvis was a shot off the lead with four holes left in his second round. The 19-year-old South African made seven consecutive birdies and was 8 under on the day when play was halted.

Tiger Woods and 13-year-old son Charlie are returning to the PNC Championship with hopes of doing one better than last year. The 20-team field is for winners of majors or The Players Championship and a child or parent. This will be the third time Woods plays. A year ago, he and Charlie finished one shot behind John Daly (Dardanelle, Arkansas Razorbacks) and his son. The 36-hole event, televised by NBC, is Dec. 17-18 at the Ritz-Carlton Golf Club Orlando. Woods has not competed since he missed the cut in the British Open at St. Andrews in July. He is playing next week in his Hero World Challenge in the Bahamas, a 72-hole event against a 20-man field of the world's top players. He also has a made-for-TV exhibition on Dec. 10 with Rory McIlroy as his partner against Justin Thomas and Jordan Spieth.

Canada took the top two spots in the first women's monobob World Cup race of the season Friday, while Olympic champion Kaillie Humphries of the U.S. won the bronze. Bianca Ribi finished her two runs in 1 minute, 50.89 seconds for her first win on the top women's circuit. She was 0.27 seconds faster than fellow Canadian slider Cynthia Appiah, and Humphries had the fastest time in the second heat to finish third, 0.29 seconds off the pace. First-run leader Laura Nolte of Germany crashed in her second run and finished seventh. The U.S. had three of the nine sleds in the very light season-opening field. Nicole Vogt was sixth and Riley Compton was eighth.