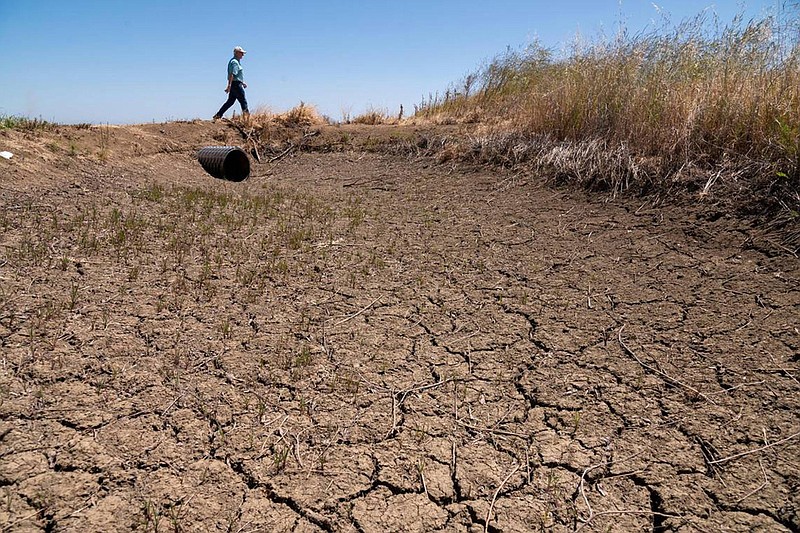 Rice farmer Don Bransford walks past a dry ditch in May that usually brings water to his 1,800 acres of rice fields near Williams, Calif. He did not grow any rice this year because of limited water in the drought. (The Sacramento Bee (TNS)/Paul Kitagaki Jr.)

In the fall, rice fields in the Sacramento Valley usually shine golden brown as they await harvesting. This year, however, many fields were left covered with bare dirt.

"It's a disaster," said rice farmer Don Bransford. "This has never happened. Never. And I've been farming since 1980."

Bransford typically farms about 1,800 acres of rice. But the drought was so severe this year that water deliveries to area farms were drastically cut. Bransford, board president of the Glenn-Colusa Irrigation District, didn't plant a single acre. Many other farms went idle as well.

California has just gone through the state's driest three-year period on record, and this year the drought has pushed the fallowing of farmland to a new high.

In a new report on the drought's economic effects, researchers estimated that California's irrigated farmland shrank by 752,000 acres, or nearly 10%, in 2022 compared with 2019 -- the year prior to the drought. That was up from an estimated 563,000 acres of fallowed farmland last year.

Nearly all the farmland that was left unplanted and dry falls within the Central Valley, and a large portion of it in the valley's northern half. The state's main rice-growing regions in Sutter, Colusa and Glenn counties were hit particularly hard, the report said, with about 267,000 acres fallowed this year.

"The severity of the ongoing drought has been unprecedented for the Sacramento Valley," said Josue Medellin-Azuara, a water resources economist and associate professor of civil and environmental engineering at UC Merced. "It's been more severe over the past year, and you have the cumulative effects of the previous dry years."

Medellin-Azuara and colleagues from UC Merced, UC Davis and the Public Policy Institute of California prepared the report for the California Department of Food and Agriculture. They estimated changes in the acreage of irrigated land by surveying irrigation districts, analyzing water data and reviewing satellite data.

They found that water deliveries in the Central Valley were cut by nearly 43% in both 2021 and 2022. Growers partially made up for those reductions by pumping more groundwater.

An estimated 12,000 agricultural jobs were lost, representing a 2.8% decline.

The researchers said California lacks sufficient programs to assist laborers who lose farm jobs. They said it's crucial "to identify and assist communities that rely on seasonal and permanent agricultural jobs that are vulnerable to drought."

The amount of farmland left dry this year surpassed the peak of fallowed land during California's last drought from 2012 to 2016.

Medellin-Azuara said the situation could have been worse this year if reservoirs that supply the San Joaquin Valley hadn't risen somewhat with rains in late 2021, making more water deliveries possible.

Still, the losses for agriculture were severe.

"It's a really remarkable hit," said Daniel Sumner, a professor of agricultural economics at UC Davis. He said the effects on the farm economy in the Sacramento Valley, which typically has more water and fares better than the San Joaquin Valley, were especially pronounced, representing the biggest contraction he has seen in the region in decades.

"We cut back on cotton. We cut back on some other crops. And the fruits and vegetables that we're most known for, we continue to produce most of them," Sumner said. "California agriculture is incredibly resilient."

But pressure on agriculture is increasing as climate change unleashes more intense and longer-lasting droughts, as well as heat waves that can harm crop yields.

During the past two years, growers have dramatically increased groundwater pumping in the Central Valley, including many areas where water levels are declining and a growing number of household wells have gone dry. The researchers estimated that farms have pumped 27% more groundwater this year than in 2019.

Such heavy reliance on wells will face new limitations in the coming years. Local water agencies across the San Joaquin Valley are required to begin reining in overpumping under California's Sustainable Groundwater Management Act, which requires them to balance water use with available supplies by 2040. Researchers have projected that meeting the law's sustainability rules will require that vast areas of farmland be taken out of production permanently.

For now, farmers with wells have been able to rely on aquifers. But in areas where rice farms have long depended solely on flows from the Sacramento River, many growers have no wells. Without water flowing in canals, farmers were left without options.